Spending on Necessities and Luxuries

The price of necessities hits us all in a vulnerable spot. If the price of airfares to New Zealand rises, it doesn't affect my life--except that my dream vacation to New Zealand looks a little less possible. But if the price of food and gasoline rise, I notice it immediately, and it cuts into the family budget for entertainment and other pleasant activities. In an Economic Commentary written for the Federal Reserve Bank of Cleveland (October 6, 2014), LaVaughn M. Henry looks at "Income Inequality and Income-Class Consumption Patterns."  By his measure, those with higher incomes can (unsurprisingly) spend a far smaller share of their income on necessities as compared to luxuries. However, all income groups are spending a lower share of their income on necessities than they did several decades ago.

Henry looks at data from the Consumer Expenditure Survey, which divides up what people buy into various categories. He then classifies some of the categories as more likely to be disproportionately "necessities" and others as disproportionately "luxuries." for example, necessities include food at home, rent, utilities, health care, education, gasoline, and household supplies. Luxuries include food away from home, entertainment, household furnishings, "other lodging," and others. His complete list appears at the bottom of the post. This division is clearly rough and ready, but as Henry explains: "A specific type of good or service is classified as a luxury if more of it is consumed, on a percentage basis, as real income levels increase (that is, going from lower to higher income quintiles). Similarly, a specific good or service is classified as a necessity if it accounts for a smaller percentage of consumption as real income levels increase."

Back in 1984, household spending was more-or-less evenly divided between necessities and luxuries. Luxuries then rose as high as 58% of annual spending before the Great Recession hit, and have now fallen back to 56% of annual spending. Here's the pattern: 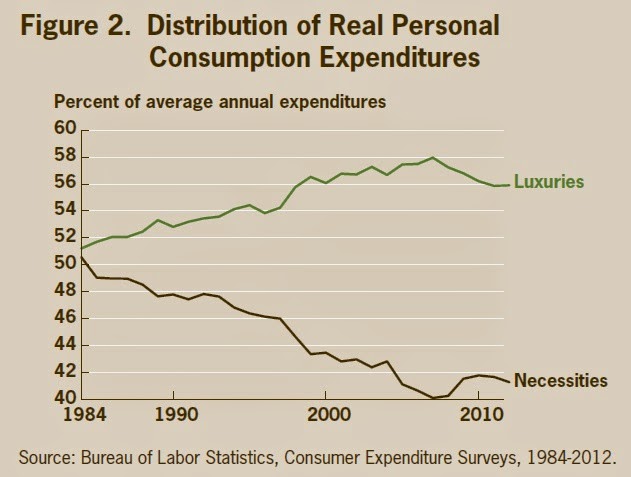 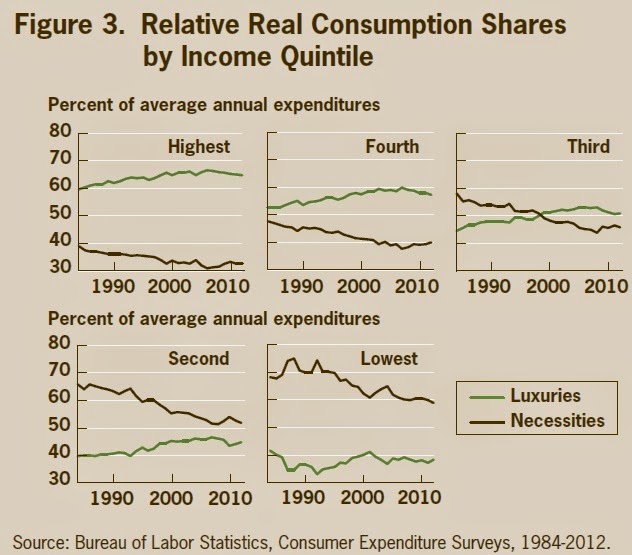 Many people, including me, have a tendency to feel that their hard-earned money should be spent on something fun, rather than having too much of it go to boring necessities like food and gas. One reason the pinch of the Great Recession has felt so severe, I think, is that people have been used to a world where over time they were able to spend more on luxuries. But that long-term trend halted during the Great Recession, and has not yet resumed.