Patterns in US Information Techology Jobs

Would you expect that the number of US jobs in information technology fields is rising or falling over time? On one side, the growing importance of IT in so many areas of the US economy suggests that the job totals should be rising. On the other hand, one often reads warnings about  how a combination of advances in technology and outsourcing to other countries are making certain jobs obsolete, and it seems plausible that a number of IT-related jobs could be either eliminated or outsourced to other countries by improved web-based software and more powerful and reliable computing capabilities. So which effect is bigger?  Julia Beckhusen provides an overview of "Occupations in Information Technology," published by the US Census Bureau (August 2016,  American Community Survey Reports ACS-35).

The top line is that US jobs in IT seem to be roughly doubling in each decade since the 1970s. Here's an illustrative figure. 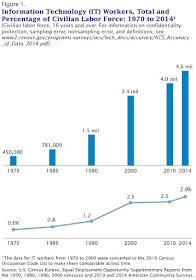 What exactly are these jobs? Here's a breakdown for 2014 The top five categories, which together make up about three-quarters of all the IT jobs, are softward developers, systems and applications software; computer support specialists; computer occupations, all other; computer and information systems managers; and computer systems analysts. 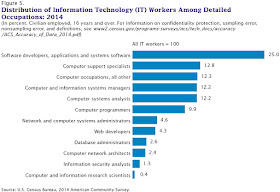 Are these IT jobs basically in the category of high-paying jobs for highly educated workers? Some are, some aren't. The proportion of workers in each of these IT job categories with a master's degree or higher is shown by the bar graphs on the left. The median pay for each job category is shown by the dot-graph on the right. Unsurprisingly, more than half of all those categorized as "computer and information research scientists" have a master's degree or higher; what perhaps surprising here is that almost half of those in this job category don't have this level of education. But in most of these IT job categories, only one-quarter and in many cases much less than one-quarter of those holding such an IT job have a master's degree. Indeed, I suspect that in many of the lower-paid IT job categories, many do not have a four-year college degree either--there are a lot of shorter-term programs to get some IT training. In general, IT jobs do typically pay more than the average US job.  But the highest-paid IT jobs in the "research scientists" category also has the smallest number of workers (as shown in the graph above). 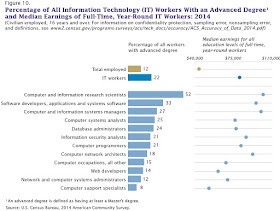 Finally, to what extend are these IT jobs held by those born in another country who have immigrated at least for a time to the United States?  As the bars at the top of the figure show, 17% of all US jobs are held by foreign-born workers; among IT workers, it's 24%. 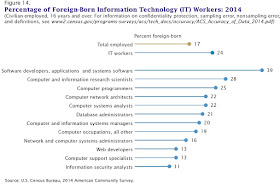 Beckhusen provides lots more detail in breaking down IT jobs along various dimensions. My own guess is that the applications for IT in the US economy will continue to be on the rise, probably in a dramatic fashion, and that many of those applications will turn out to be even more important for society than Twitter or Pokémon Go. The biggest gains in jobs won't be the computer science researchers, but instead will be the people installing, applying, updating, and using IT in a enormously wide range of contexts. If your talents and inclinations lead this way, it remains a good area to work on picking up some additional skills.
Timothy Taylor at 9:05 AM
Share
‹
›
Home
View web version