The Social Nature of Government Actions

Economics famously begins with an idea of individuals pursuing their own interests, and then discusses both the positive and negative dynamics that can emerge. But there has been a long-time pattern in human affairs, going back to the days of the hunter-gatherers, that certain outputs have been produced socially--by families, communities, and in modern times also by government. Emmanuel Saez explores this issue in his American Economic Association Distinguished Lecture at the virtual AEA meetings last January on the subject, "Public Economics and Inequality: Uncovering Our Social Nature" (AEA Papers and Proceedings 2021, 111: 1-26, subscription required, but freely available at Saez's website here). Saez writes:

[O]ur social nature, absent from the standard economic model, is crucial for understanding our large modern social states and why concerns about inequality are so pervasive. Taking care of the young, sick, and elderly has always been done through families and communities and likely explains best why education, health care, and retirement benefits are carried out through the social state in today’s advanced economies. Behavioral economics shows that we are not very good at solving these issues individually, but descriptive public economics shows that we are pretty good at solving them socially. ...  Even though an individual solution through markets is theoretically possible, it does not work well in practice without significant institutional or government help. Human societies are good at providing education, health care, and retirement and income support even though individuals are not.

Although Saez offers a brisk overview of earlier human societies, his main focus is on what he calls ""the rise of the social state in the twentieth century:" He writes:

Perhaps the most striking fact in modern economies illustrating both our social nature and concerns for inequality is the size of government and the large direct impact it has on the distribution of economic resources. In advanced modern economies, we pool a large fraction of the economic output we produce through government. In the richest countries today, taxes generally raise between 30 and 50 percent of national income and are used to fund not only public goods needed for the functioning of the economy but also a wide array of transfers back to individuals, both in cash and in kind. Even though modern economies generally allocate the fruits of production to workers and owners through a capitalistic market system with well-defined property rights, as societies, a significant fraction of market incomes, typically between one-third and one-half, is shared (that is, effectively “socialized”) through government.

Here's are a couple of figures showing the rise in government spending in advanced economies in the 20th century: 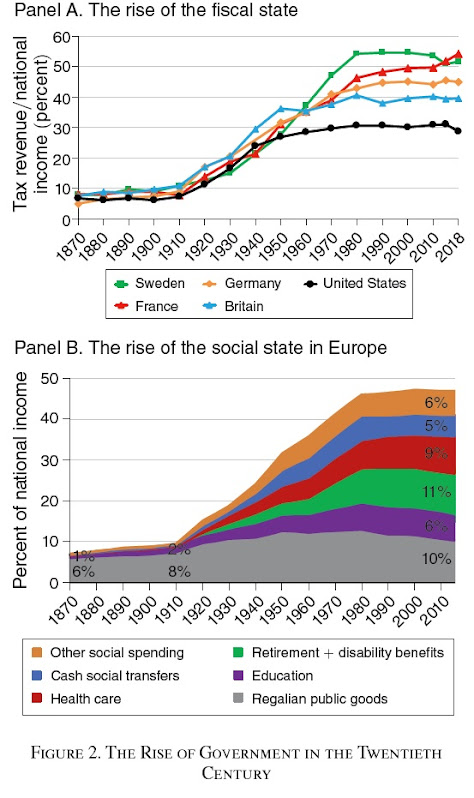 (In the figure "Regalian public goods" is a category that Saez defines as the basic roles of a very limited government, including defense, law and order, administration, and infrastructure).
As Saez notes, the US economy is near the lower end of this range--but it's still a substantial share. I would add that a significant part of the difference is that the US has kept a large portion of its health care spending in a heavily regulated private sector. Saez also notes that there is relatively little cross-border redistribution, and when it happens, it's often in the form of disaster relief. People seem to define their circle of sharing within their country, or to some extent within a lower-level jurisdiction like a state or city,

Again, the big four social categories on which Saez focuses are education, retirement benefits, health care, and income support. To get a sense of the tone of his argument, here are a few of his comments on these categories:

Historically, mass education is always government driven through a combination of government funding (at all levels including higher education) and compulsory schooling (for primary and then secondary education). ...

Before public retirement programs existed, a large fraction of the elderly was working (80 percent of men aged 65 or older were gainfully employed in the United States in the late nineteenth century ...). The elderly who could no longer work enough to support themselves had to rely on family support. Public retirement systems were a way to provide social insurance through the state instead of relying on
self-insurance or family insurance. ...

[U]niversal health insurance creates significant redistribution by income and also, of course, by health and health-risk status. One important question is why health-care quality is the same for all in such universal health-care systems (at least as a principle, not always realized in practice). Why isn’t health insurance offered in grades, with cheap insurance covering only the most cost-effective treatments. Probably because humans are willing to spend a lot of resources to save a specific life, that is, an actual person with a condition that can be treated. This is likely a consequence of our social nature shaped by evolution: taking care of the sick or injured was helpful for group survival. This makes withholding treatment to the poorly insured socially unbearable. ...

People make mistakes in health- care utilization and treatment choices. Copayments and deductibles lead consumers to reduce demand for high-value care. This may explain why universal health-care systems have low copays and deductibles and why health-care decisions for patients are made primarily by health-care professionals. Like for education, the difficulty for users to understand and navigate health-care choices implies that the market does not necessarily deliver efficiency. In sum, the problem of health care is also primarily resolved at the social level rather than the individual level. ...

Everywhere, there is strong social reprobation against “free loaders” who could work and support themselves but decide to live off government support This is why income support is concentrated among groups unable or unexpected to work, such as the unemployed, the disabled, and the elderly.

As Saez discusses, the fact that advanced societies have decided that government provision will play such a large role in these four areas is rooted in other social judgements: for example, judgements about the fairness and importance of widespread education for children, judgements about whether the elderly should need to work (and how to define who is "elderly"), judgements about whether the sick and injured will have access to care, and judgements about which groups of people deserve income support and under what conditions. Of course, this kind of social consensus can shift. We saw a shift in the 1980s and 1990s about whether single mothers with small children were expected to work, or not. As another example, back in the 1980s, 50-55% of Americans in the 16-19 age bracket were in the labor force; now, it's about 35%. A substantial part of that shift is in our sense of what people in that age group should be doing with their time. Saez writes:

However, the social state also intentionally reduces labor supply by design through various regulations: child labor prohibitions and compulsory education limit work by the young, retirement benefits sharply reduce work in old age, and overtime hours-of-work regulations and mandated paid vacation (for example, five weeks in France) reduce work across the board. This implies that labor supply should be seen partly as a social choice, with society having disutility of labor for the very young, the old, and very long hours with no vacation break.

There's much more in the lecture itself. But the main theme deserves attention. Saez writes: "Therefore, social organization does seem to come naturally to us. We can easily take a group perspective and act accordingly." Understanding the group perspective and the social organizations that form as a result seems like an important tool for understanding what we expect from government--and what some of the barriers are to redesigning government programs to operate more effectively
Timothy Taylor at 1:58 PM
Share
‹
›
Home
View web version