I've posted in the last couple of months about Worldwide Gender Equality in Education and Health (October 17, 2011) and about The Diminishing Gender Wage Gap in the U.S.  (November 4, 2011).
But in high profile positions like positions on corporate boards and positions in legislatures, a large gender gap remains around the world.


For corporate boards, this figure from Catalyst tells the basic story. Norway is at the top of the list in part because it imposed a legal quota that women must be 40% of the boards of all state-owned and quoted companies. 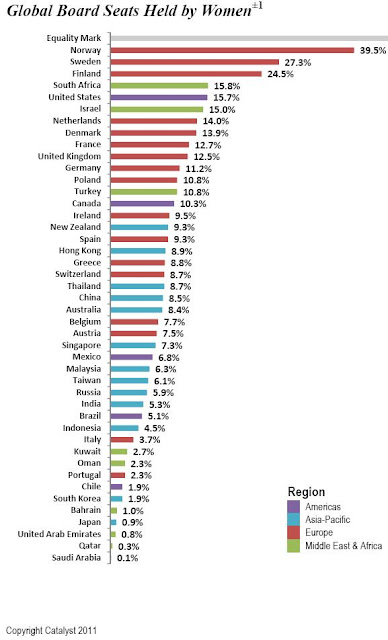 In the November 26 issue of the Economist, Barbara Beck has a thoughtful survey article, "Closing the Gap," that explores issues of women and work around the world. She comments on the corporate board issue:

"Norway has become famous for imposing a 40% quota for women on the boards of all state-owned and quoted companies. Over a period of about a decade this raised the proportion of women on boards from 6% to the required figure. Aagoth Storvik and Mari Teigen, two Oslo-based academics who made a detailed study of the experiment last year, found that once the policy was implemented the heated debate over it died down completely and the system now seems to be working smoothly. But the researchers also point out that even now only 5% of the board chairmen (and only 2% of the bosses of companies quoted on the Oslo stock exchange) are women, so this is not a quick fix.
Nevertheless other countries have picked up on the Norwegian example. Spain has set a mandatory 40% target for female directors of large companies by 2015 and France by 2017. Germany is debating whether to impose quotas. In Britain a government-commissioned report earlier this year recommended that companies set themselves voluntary targets, but six months later only a handful seemed to have got around to it and progress is being kept under review. The European Union’s justice commissioner, Viviane Reding, has told European business leaders to promote many more women to boards voluntarily, or they may find their hands forced."

I'm usually an immediate opponent of quotas for positions. Beyond the problems of inflexibility and the inferences of tokenism, they seem to me like a way to substitute a mechanical rule for thoughtful consideration. But it also seems to me that many corporate boards have a poor job of reaching out for thoughtful talent from a variety of perspectives, and forcing them to reach out may be beneficial. (Also, shouldn't many more academic economists receive well-paid positions on corporate boards?) In the Economist, Beck tells of a London Business School Professor named Lynda Gratton who started out opposing gender quotas, but has changed her mind. Part of Gratton's rationale is that even if gender quotas lead some women of less-than-desireable competence to end up on corporate boards, they will probably just take the places of men who also have less-than-desireable competence.

The Inter-Parliamentary Union does an annual report on "Women in Parliament."  The data over the last 15 years show modest and intermittent progress toward gender equality in legislatures. Here's an overall summary, comparing the share of women in legislatures across regions for 1995 and 2010. 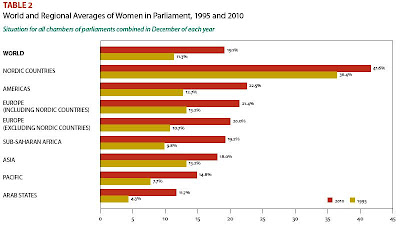 The IPU report summarizes events in 2010 this way: "In 2010, there were renewals [elections] for 67 chambers in 48 countries. Half of these renewals brought more women into parliament. In one-fifth of the chambers women’s representation stayed the same as in the previous legislature. More worrying is that in 28.5% of cases fewer women made it to parliament. By the end of 2010 women held 19.1% of all parliamentary seats worldwide, an all-time high that confirms the pattern of slow progress over the past 15 years from a world average of 13.1% in 2000. The number of chambers that have reached the UN target of 30% now stands at 43, a slight drop from 2009. Sixty-two chambers remain below the 10% mark, and 10 chambers have no women at all."

The IPU is also believes that quotas are a useful step toward improving the share of women in legislatures: "Quotas remain the single most effective way of increasing the number of women in politics. Five countries with legislated quotas, Afghanistan, Brazil, Costa Rica, Iraq and Kyrgyzstan, remained stable or saw small declines in their lower houses in 2010. Many countries that have no legislated quotas in the national parliament have voluntary party quotas. In addition, there can be local-level quotas even when there are none in the national parliament. This is the case in Namibia and the Philippines. ... Egypt’s 2010 election result raises questions about the reserved seats quota system. While it led to a 10.9 percentage point increase in the number of women members, not a
single one was elected from outside the quota system. This is a setback as, previously, nine women had been elected to parliament through the normal electoral process."

Again, I'm a visceral opponent of hard quotas. But it does seem to me that legislatures often end up with too narrow a slice of the population--for example, an overload of lawyers and the sort of egomaniacs who run to march at the front of every parade. It's certainly possible that gender quotas could push some undeserving women into office, but money and old family ties and incumbency push some undeserving men into office every year. I don't know of evidence that women who are part of a quota system are any less productive as legislators. And it seems to me reasonable and overdue for political parties to seek a broad diversity in their slate of candidates.