When thinking about future technology and how it may affect economic growth, it's common enough, for obvious reasons, to focus on the possibilities related to information and communications technology: new possibilities for the internet, robotics, driverless cars, and so much more. It's worth remembering that the powers of computation can combine with biological research to bring breakthroughs in other  areas too. William Hoffman draws attention to "The Shifting Currents of Bioscience Innovation" in an article earlier this year published in Global Policy.  William Hoffman  and Leo Furcht also have a just-published book out on the subject called
The Biologist's Imagination: Innovation in the Biosciences.

Here's are a couple of figures from the Hoffman article to illustrate the shockingly rapid change in bioscience innovation in recent decades. This figure shows global population over time, with the timing of various important discoveries shown as well. Robert Fogel did an earlier version of this figure, while Hoffman added detail on biosciences innovations. Innovation in this area has gone from antibiotics and the polio vaccine to sequencing the human genome and synthetic bacterial cells in a little more than half-century. 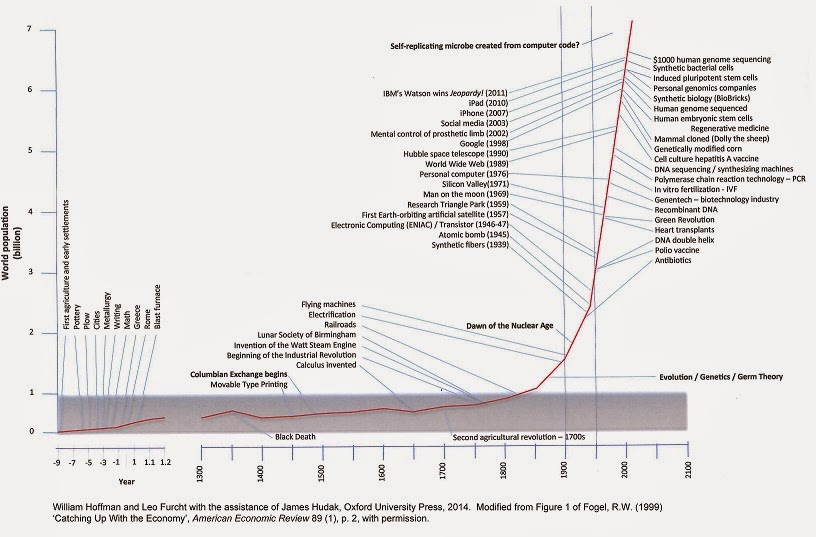 For a sense of the speed of change in this area, think about the gains from "Moore's law," the relationship first pointed out back in 1965 by Gordon Moore, one of the founders of Intel Corporation that the number of transistors on a computer chip was doubling every two years. That rate of growth has held up pretty well since thenm and seems likely to continue for at least a few more years (for earlier discussions of Moore's law on this blog, see here and here). The results of the information technology revolution are all around us. The key point here is that the cost of sequencing a human-sized genome has been falling faster than Moore's law since about 2007. 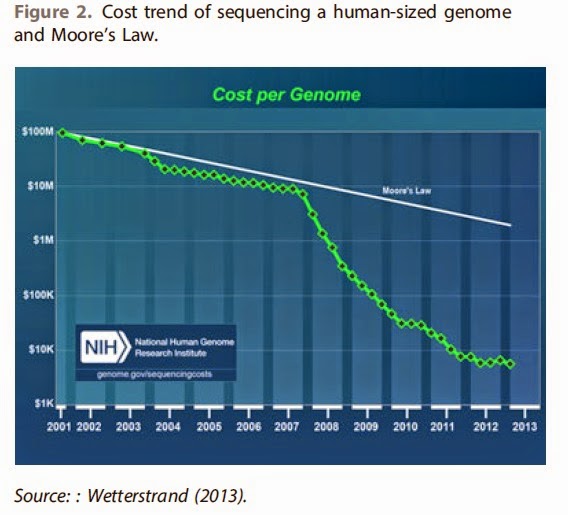 Up until now, the best-known economic payoffs from this biosciences have been pharmaceuticals (the group of medicines and drugs often called  "biologics") and genetically modified crops (which have effects both on food products and on related outputs like biofuels). But my sense is that a wide variety of industrial and even household applications may not be far behind. Here's a sample of Hoffman's argument:

Cutting-edge tools from genomics and bioinformatics, cellular technologies including stem cells, and synthetic biology, with assists from nanotechnology and automation, are poised to revolutionize bioscience productivity. These tools make it possible to sequence and synthesize DNA at an industrial scale, edit genes precisely, control the growth and differentiation of cells and seed them in three-dimensional (3D) constructs, and create microbial factories that produce medicines, chemicals, fuels and materials. They are transforming traditional models of drug discovery and development and diagnostic testing. The more DNA, RNA, and cellular components fall under the purview of bioengineers, the likelier we are to see large-scale production of renewable fuels, biodegradable materials, and safer industrial chemicals.

Genomics is opening a window on genetic alleles that enable food crops to adapt to a changing climate, and synthetic biology is being used to design novel environmental remediation systems. Using 3D printers puts science into the hands of people ‘whether in the far corners of Africa or outer space’ so that they can print drugs on demand. They can be modified to print cells including stem cells, which are key to cellular differentiation and tissue repair. Digitally enabled bioprinting means on-demand tissue and organ production for surgical modelling, medical therapy, drug testing and science education.

At the most basic level, the idea that useful materials can be grown as needed, not just manufactured from raw materials, seems to me a potentially vast breakthrough. A couple of years ago I read the article "Form and Fungus: Can mushrooms help us get rid of Styrofoam?" by Ian Frazier in the New Yorker magazine (May 20, 3013). He tells the story of Ecovative, which essentially uses fungus, like clever mushrooms, as its production process to replace Styrofoam. Frazier writes:


The packing material made by their factory takes a substrate of agricultural waste, like chopped-up cornstalks and husks; steam-pasteurizes it; adds trace nutrients and a small amount of water; injects the mixture with pellets of mycelium [this is the fungus part]; puts it in a mold shaped like a piece of packing that protects a product during shipping; and sets the mold on a rack in the dark. Four days later, the mycelium has grown throughout the substrate into the shape of the mold, producing a material almost indistinguishable from Styrofoam in form, function, and cost. An application of heat kills the mycelium and stops the growth. When broken up and thrown into a compost pile, the packing material biodegrades in about a month.

It turns out that when you start thinking about the properties of funguses grown in shaped molds, all sorts of possibilities arise, like the potential for pieces of insulation or even replacements for wood. As the rapidly developing power of the biosciences begins to interact with this new mindset--which I think of as "grow it, don't manufacture it"--I suspect that a wide array of goods and services will be affected.

Hoffman is also up-front that the future "bioeconomy" may raise some difficult ethical and safety questions. The questions can in some cases be difficult and worth deep consideration. But I'll add that there is no reason to believe that the answers to these questions will be determined by the politicians, regulators, scientists, and citizens of high-income countries like the United State or the European Union. Top-level biosciences research is happening all over the world, very much including China, India, Brazil, and other locations. A revolution in biosciences is coming, whether or not the U.S. decides to let its domestic researchers and domestic companies participate fully.