The Federal Reserve reduced what had been its main policy-related interest rate, the federal funds reserve rate, down to a target range of 0% to 0.25% at the tail end of 2008, and kept it there until December 2015, when it raised the target range to 0.25% to 0.5%. With this interest rate essentially stuck in place for nearly eight years and still at near-zero levels, what should come next?

The status quo plan seems to call for the Fed to carry out slow and intermittent policy of raising the federal funds rate back to more usual levels over time. But there are two diametrically opposite proposals in the wind, both of them counterintuitive in some ways. One proposal is for the Fed to push its policy interest rate into negative territory. The other "neo-Fisher" proposal is for the Fed to raise interest rates as a tool that seeks to raise inflation. Both proposals have enough uncertainties that that I suspect the Fed will continue along its present path. But here's an overview of the two alternative approaches.

Benoît Cœuré, a member of the Executive Board of the European Central Bank, provided a useful overview "Assessing the implications of negative interest rates," in a July 28, 2016 lecture. Perhaps the first mental hurdle to cross in thinking about negative interest rates is to remember that they are already happening, which does not prove whether they are wise or unwise, but certainly proves that they are not impossible! As he points out, the European Central Bank pushed a key policy interest rate into negative territory in June 2014. The Swiss National Bank went negative in December 2014. The Bank of Japan went negative in January 2016. 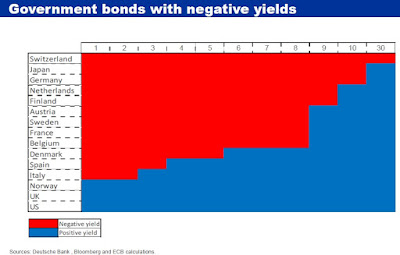 As I see it, the events that led to negative policy interest rates can be expressed using the basic relationship named after the great long-ago economist Irving Fisher (1867-1947). Fisher pointed out that:

Thus, back in the mid-1990s, it was common for US government borrowing to pay a nominal interest rate of about 6% on a 10-year government bond, which one could think of as about 3-4% a real interest rate on a safe asset, and 2-3% the result of inflation. In the last 15 years or so, real interest rates have been driven ever-lower by global macroeconomic forces involving demographics, rates of saving and investment, rising inequality, an increased desire for ultra-safe assets, and other forces. (For a discussion, see this post on "Will the Causes of Falling Interest Rates Unwind?" from February 25, 2016).  Inflation rates have of course been very low in the last few years as well, especially since the Great Recession and the sluggish recovery that followed.

But although negative interest rates are now real, and not hypothetical, just how much they can accomplish remains unclear. After all, it seems unlikely that the reasons for a lack of lending and borrowing--whatever they are--will be profoundly affected by having the central bank policy interest rate shift from barely above 0% to barely below 0%. Thus, the question becomes whether to push the negative interest rates lower still. Cœuré discusses possible tradeoffs here.

For example, one issue is whether economic actors start holding large amounts of cash, which at least pays a 0% interest rate, to avoid the negative rates. At least at the current levels of negative interest rates, this hasn't happened. As noted already, actual real interest rates have often been negative in the past. Although Cœuré doesn't discuss this point in any detail, there's some survey evidence that people (and firms) may react to negative interest rate by saving more and having a bigger cash cushion, which would tend to work against such low rates stimulating borrowing and spending.

Instead, Cœuré focuses on the issue of whether there is what he calls an "economic lower bound," where the potentially positive effects of negative interest rates in encouraging banks to lend are offset by potentially negative effects. He looks at evidence on the sources of profits for euro-area banks, and finds: "In recent years, the distribution of these sources has been fairly stable, with approximately 60% of income coming from net interest income, 25% from fees and commissions and 15% from other income sources."


Indeed, analysts forecast a decline in bank profitability in 2016 and 2017, mainly due to lower net interest income. And the recent decline in euro area bank share prices can be at least partially ascribed to market concerns over future banks profitability. ... As such, if very low or negative rates are here for a prolonged period of time due to the structural drivers highlighted above, banks might have to rethink their business models. The revenue structure of euro area banks was stable for a long time but it has recently begun to change and there is at least some evidence of banks tending to offer fee-based products to clients as substitutes for interest-based products.

The overall irony here is that there has been enormous concern in recent years over the risks of an unhealthy banking industry, and a common recommendation has been to require banks to build up their capital, so that they won't be as vulnerable to economic downturns and won't need payouts. But when a central bank uses a negative policy interest rate, it is saying that banks will not be receiving interest on a certain subset of their funds, but instead will be paying out money on a certain subset of their funds. When higher-ups at the European Central Bank start talking about how all the euro-area banks "might have to rethink their business models," that's not a small statement. For some more technical research on how to think about when harms to the banking sector might outweigh other benefits, a useful starting point is a working paper by Markus K. Brunnermeier and Yann Koby, “The “Reversal Rate”: Effective Lower Bound on Monetary Policy,” presented at a Bank of International Settlements meeting on March 14, 2016.

There are other uncertainties about very low and negative-yield interest rates. If a government decides that it wants to borrow heavily for a fiscal stimulus, does this at some point become difficult to do if the government is offering very low or negative interest rates? Certain policy steps might make sense for a smaller economy like Switzerland, where the central bank is in part using the policy interest rate to affect its exchange rate, but might not make sense for the mammoth US economy. The Fed has no desire to risk setting off off a pattern of central banks around the world competing to offer ever-more-negative interest rates. Taking all this together, I expect that while negative policy interest rates will continue in Europe for some time, concerns about financial sector stability and other issues means that they are unlikely to be adopted by the US Federal Reserve. Fed vice-chair Stanley Fischer made a quick and dismissive  reference to negative interest rates in a talk on the broader economy last week, saying that "negative interest rates" were "something that the Fed has no plans to introduce." Of course, "has no plans" doesn't mean "will never do it," but the current policy of the Fed calls for a slow rise its policy interest rate, not decline.

For a full-scale tutorial on the state of thinking about central banking and negative interest rates, a useful starting point is at June 6 symposium on "Negative Interest Rates: Lessons Learned ... So Far," which was held by the Hutchins Center on Fiscal and Monetary Policy at Brookings. The weblink has full video for about three hours of the session, together with a transcript and slides from the speakers.

The polar opposite to negative interest rates is the idea of raising interest rates as a way of increasing inflation, a set of arguments which is considerably more counterintuitive than the case for negative interest rates. Stephen Williamson provides a readable overview of these arguments in "Neo-Fisherism: A Radical Idea, or the Most Obvious Solution to the Low-Inflation Problem?" which appears in the July 2016 issue of The Regional Economist, published by the Federal Reserve Bank of St. Louis (pp. 4-9 offers a primer for understanding the neo-Fisherian argument. Again, neo-Fisherian refers to the relationship invoked by the famous economist between nominal interest rates and inflation:

This relationship isn't mysterious. When anyone lends or borrows, they pay attention to the expected rate of inflation. Lots of people took out home mortgages at 12% and more back in the early 1980s, because inflation had recently been 10% and higher, so they expected to be able to pay off the mortgage in inflated dollars. In modern times, of course, it would seem crazy to borrow money at a 12% interest rate, given that inflation is down in the 1-2% range.

However, neo-Fisherism also raises some obvious questions: Why are we trying to achieve a goal of higher inflation? Doesn't that jolt of rising real interest rates in the short-term risk causing a recession?


"There are no good reasons to think that, for example, 0 percent inflation is worse than 2 percent inflation, as long as inflation remains predictable. But "permazero" damages the hard-won credibility of central banks if they claim to be able to produce 2 percent inflation consistently, yet fail to do so. As well, a central bank stuck in a low-inflation policy trap with a zero nominal interest rate has no tools to use, other than unconventional ones, if a recession unfolds. In such circumstances, a central bank that is concerned with stabilization—in the case of the Fed, concerned with fulfilling its "maximum employment" mandate—cannot cut interest rates. And we know that a central bank stuck in a low-inflation trap and wedded to conventional wisdom resorts to unconventional monetary policies, which are potentially ineffective and still poorly understood."

What about the risk that a spike in real interest rats could bring financial disruptions and even a recession? Williamson's essay doesn't discuss the possibility. Perhaps if the Fed described what it was going to do, and why it was going to do it, the spike in real interest rates might be smaller. But the risks of neo-Fisherism seem like a real danger to me. Among other changes, neo-Fisherism would be a very dramatic change in Fed policy, and for that reason alone it has the potential to be highly destabilizing at least in the short run.

So if the Federal Reserve is trapped between not wanting to go with negative interest rates on one hand, but also not believing in neo-Fisherism on the other hand as a justification for a dramatic rise in interest rates, what does it do. For some context, consider the unemployment rate (blue line) and inflation rate (red line) in the last few years. Unemployment has been drifting lower. The inflation rate was up around 2% in early 2014, but then dropped down to near-zero, in part as a result of the sharp fall in oil prices during that time. After that fall in oil prices was completed, inflation went back up to about 1% by late 2015. Not coincidentally, the Fed also raised its target for the federal funds interest rate in December 2015. The Fed is taking a wait-and-see stance, but my guess is that if inflation goes up to the range of about 2%, the Fed will view this as an opportunity to raise its nominal interest rate target a little higher. That is, instead of the neo-Fisherism view in which raisint the nominal interest rate brings on higher inflation, the Fed is instead letting inflation go first, and raising the interest rates afterward. 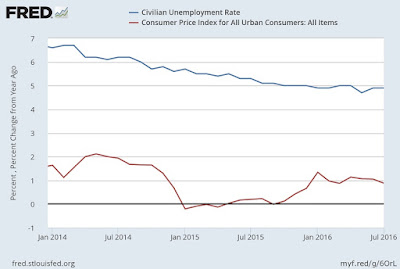