An AEI-Brookings Working Group on Paid Family Leave has been considering family leave policies during the last year or so, and some results of their deliberations appear in "Paid Family andMedical Leave: An Issue Whose Time Has Come" (May 2017). For the fortunate readers out there who don't concern themselves with the political leanings of DC think tanks, the American Enterprise Institute tends to leans right, while Brookings tends to lean left. Thus, the report is based on views of knowledgeable experts from a range of political perspectives. (For those who want names, the Codirectors of the report are Aparna Mathur and Isabel V. Sawhill, and the other participants are Heather Boushey, Ben Gitis, Ron Haskins, Doug Holtz-Eakin, Harry J. Holzer, Elisabeth Jacobs, Abby M. McCloskey, Angela Rachidi, Richard V. Reeves, Christopher J. Ruhm, Betsey Stevenson, and Jane Waldfogel.)

Some of the themes in the report, while certainly worth making, are not especially new. For example, "the United States is the only advanced nation that does not have a paid leave policy at the national level. The federal Family and Medical Leave Act, passed in 1993, offers 12 weeks of job-protected, unpaid leave, but only about 60 percent of the workforce is eligible for its protections. ... Polls show overwhelming public support for paid family and medical leave ... with almost 71 percent of Republicans and 83 percent of Democrats in favor of a paid parental leave policy."

But economists mistrust polls which ask if people would like to receive a pleasant new benefits, but don't place equal emphasis on the costs. Thus, for me the most intriguing point in the report is that apparently no one in the Working Group, no matter their political leanings, favored requiring an employer mandate for employers to pay the costs of paid leave. As the report notes:


"That said, paid leave generates a variety of concerns from a business perspective. Most obviously, there are business costs associated with paid leave if employers are simply mandated to provide it. For this reason, we think it is worth noting that no one in our working group favored an employer mandate. ... This approach is popular with the general public. However, we do not favor it for two reasons. First, it would be burdensome on employers, especially small businesses and those employing a disproportionately high share of likely parents. Second, it will likely lead to a reluctance to hire female workers of a certain age. ... Instead, most— although not all of us—favored a slight increase in the payroll tax on employees, with a minority in favor of reduced federal spending in other areas to pay for a new benefit. "

Here's some additional detail on their argument. As a starting point, here's an international comparison across OECD countries of paid parental leave. On the left, the bars show what percentage of income is replaces for men and for women. On the right, the bars show the length of parental leave. As the figure shows, it's fairly common for countries to have paid parental leave with a length of six months to a year, and it's common for the payments to replace about half of wages. 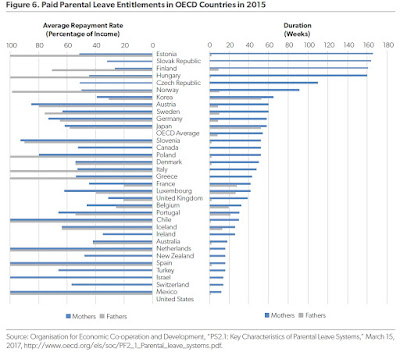 In the US, a few states have enacted paid parental leave rules. Here's a table giving some description. 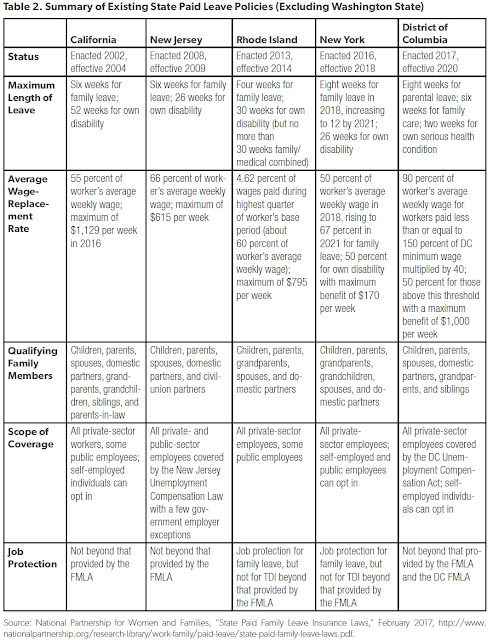 As the table helps to illustrate, some of these laws are quite recent, and the evidence on their operation is not in yet. The reason why Washington state isn't included in the table, as the report notes, is: "Washington State has not yet implemented its policy because it has not established a funding mechanism." In the other states, "California, Rhode Island, New Jersey, and New York incorporated paid family and medical leave into the states’ existing TDI [Temporary Disability Insurance] programs, financed through payroll contributions. However, these four states finance the paid family and medical leave benefit exclusively through employee payroll contributions, rather than joint employer/employee contributions ..."

The report is scrupulous in  pointing out concerns with the existing US programs, and I'll mention two of them here. One is that the existing programs do relatively little to help lower-income women. Even among those eligible for paid leave in California, the take-up rate of existing benefits has been low.

"Many of the bottom 40 percent of households (by income) are ineligible for job-protected unpaid leave under the FMLA [Family and Medical Leave Act] because they are employed in small firms (with fewer than 50 employees) exempt from the law or because they do not meet the eligibility requirements in terms of hours worked with their current employers. In addition, survey data consistently show that workers in low-income households and those with low educational attainment frequently lack access to any form of paid leave. Moreover, those with fewer resources or less income are much less able to take up this leave even if they are eligible. This has led to a system in which the beneficiaries of current leave policies (whether unpaid or paid by an employer) are primarily those with moderate or high incomes, stable jobs, and employment in larger organizations. ..."

"Ten years after California’s paid family leave policy was implemented in 2004, take-up rates by eligible mothers ranged from 25 to 40 percent. ...  A 2011 study found that half of workers eligible for paid leave were unaware of the program, and a third of those who were aware and eligible but who did not apply for family leave reported that the wage-replacement rate was too low. Others cited the lack of job protection or worried that taking leave would make their employer unhappy or hurt their opportunities for advancement."

The report details how the members of the working group differed on a number of points, as one might expect given the membership of the group. But they also work to describe at least a loose consensus proposal that most members of the group could support as a minimum proposal. Here are some central  elements for the design of benefits:

"Many (but not all) of those in our group think that only those who have consistently worked with their employer for at least a year (or more than 1,000 hours in a year) should be eligible. Businesses will be averse to protecting employees’ jobs during an extended leave of absence if they contributed only a short period of work before taking leave. Some in our group are in favor of even stricter eligibility rules, but all agree that the employee should have contributed significantly to this benefit through continued participation in the workforce (in the case of a payroll tax) and with a specific
employer (for purposes of job protection). ...

"[I]t would keep the benefits relatively targeted and inexpensive by offering a 70 percent
replacement rate up to a cap of $600 per week, for a limited number of weeks (e.g., eight weeks). ... [I]t would include job protection. ... The plan’s key elements are its budget neutrality, its extension of benefits to the middle and working class and not just the poor, and its establishment of a floor on the number of weeks of leave provided. States and private employers would be free to supplement this leave if they chose to do so.

"Our working group would support such a plan— not as everyone’s preferred policy but as a reachable compromise in our group—and we put it forward for others to consider."

I very much like the honesty and straightforwardness of the plan. It acknowledges costs. It acknowledges that the US is a diverse country in its political and economic dimensions, and thus sees the federal role not as supplying a one-size-fits-all solution, but rather as setting a baseline on which states can build. It focuses on how to provide basic benefits for those who now often have no leave at all, paid or otherwise. As the report notes: "Overall, about 40 percent of households in the United States with children under the age of 18 are either headed by a single mother or are homes in which the mother is the primary breadwinner, according to data from the Pew Research Center. This share was just 11 percent in 1960."

As have explained in other posts, I think the evidence on the benefits of family leave is not as clear-cut as I might prefer; for more discussion, see "Some Economics of Parental Leave" (March 3, 2017). For example, one purported set of benefits of parental leave is giving parents a chance to remain home with children, at least for a time, while another set of benefits is that the parents are more likely to return to the paid workforce. The goals of more time with children and more connection to the workforce are tough to reconcile. The factors that determine whether low-wage parents returns to the labor force may have less to do with the availability of paid leave, and more to do with whether their job has been protected for a time and they are easily welcomed back, or how attractive the low-wage job is to them in the first place.  But the time crunch between parenthood and work is particularly rough in the couple of months right after a newborn arrives, and finding ways to ease that time crunch for the high proportion of US mothers who have limited resources seems a worthwhile goal.
Posted by Timothy Taylor at 9:58 AM