The Cycles of Cities

Cities evolve. Sometimes they boom, with strong growth in center-city areas. Sometimes the center city seems to hollow out, but economic activity in the metro area as a whole, including suburbs, remains fairly robust. Sometimes older neighborhoods with low property values experience as wave of new investment in residential housing, often called "gentrification." Sometimes both a downtown area and its surrounding metro area decline. In addition, these patterns seem to affect a number of cities at the same time. Santiago Pinto and Tim Sablik discuss one aspect of these cycles in "Understanding Urban Decline," an essay that appears in the 2016 Annual Report of the Federal Reserve Bank of Richmond.

As a dramatic opening, here's a picture of a house in Detroit's Brush Park neighborhood as it appears in 1881, and then when a photo was taken from the same perspective in 2011. The house in the middle is the one from the earlier picture. The houses on either side are long gone. Detroit is obviously an extreme example, given that its economic base was so closely tied to the auto industry. But it's far from the only example of an urban area that suffered a severe downturn. 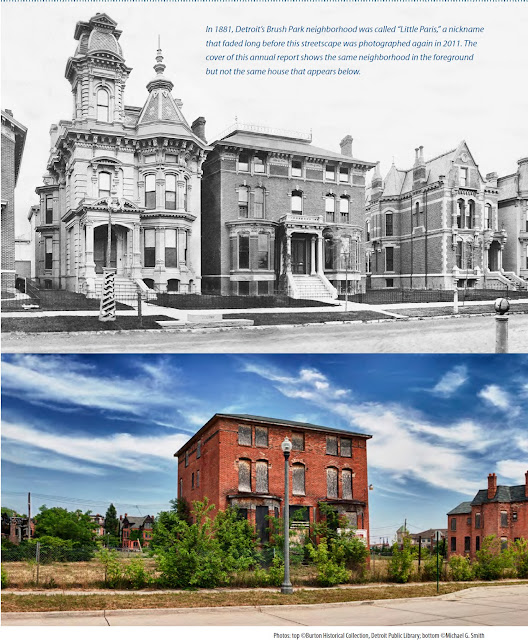 The underlying economic theory of cities points out that they offer advantages of agglomeration: that is, it's a lot easier to carry out certain activities of production, hiring, marketing, entertainment, provision of infrastructure, and transportation, when people are bunched more closely together. Thus, urban areas are engines of economic growth. There are also negative aspects of agglomeration, in that traffic congestion, crime, noise, and other negatives are also easier to carry out when people are bunched together. So cities are in a constant struggle to build on the advantages of agglomeration while mitigating the disadvantages.

The preferences of people interact with the economics of cities, and in particular, how people trade off different aspects of location. For example, people will place different values on their location relative  to  their job and the length of their commute, the cost of a place to live,high quality local-schools, a quiet and low-crime neighborhood, a bustling urban neighborhood, mass transit, shopping, parks and libraries, culture/entertainment/sports, and neighbors with certain types of income levels or ethnic mixes. As is true in so many life decisions, you can't always get all of what you want. As people with different income levels and jobs and preferences make these choices, urban patterns will emerge.

Here's what Pinto and Sablik have to say about the patterns that have emerged in US metropolitan areas (footnotes omitted):


"In most U.S. cities, wealthier households tend to live farther away from the city center, though there are a few notable exceptions (such as Chicago, Philadelphia, and Washington, D.C.). One explanation for this is that wealthier households prefer to occupy more land and therefore are willing to live in the suburbs despite higher commuting costs because the price of housing per square foot is lower. On the other hand, when a household’s income becomes sufficiently large, it may choose to move back to the city center to reduce time spent commuting. This type of trade-off could explain, for instance, why both very poor and very wealthy households are found living in some downtowns. Cities such as Boston, New Orleans, Atlanta, and Philadelphia are examples of this type of spatial pattern. Additionally, public transportation can help explain why poorer households live in the city center. Although the cost of housing per unit of land is higher in the city, public transportation allows poor households that don’t have access to cars to economize on transportation costs.

"Transportation may further explain the trend of households moving from city centers to the suburbs, often called suburbanization. Several studies suggest that the development of the highway system contributes to “urban sprawl.” One study estimated that just one highway passing through a central city reduces its population by 18 percent. Cities that experience such a decline in commuting costs do still tend to attract population, but that inflow typically causes the city to expand geographically more than it increases the number of people living in the city center.

"Certain amenities, such as schools, also may explain neighborhood sorting by income or race. For instance, as wealthier households move to the suburbs, the quality of schools and other public services provided there will tend to rise. As this process unfolds, lower-income households are left behind in the city center with limited access to high-quality local public services. This has been observed in the suburbanization that has taken place in many large U.S. cities starting around the mid-twentieth century. ...

"Cities undergo long cycles of development and decay. When a city is new, buildings near the CBD [central business district]  are the most desirable and tend to be occupied by a mix of firms and wealthier households. But as those buildings age and deteriorate, those households may move to newer developments surrounding the city, leaving behind lower-income households. This process can repeat multiple times, pushing the city border outward as higher-income households retreat to the newest ring of development. Eventually, deteriorated buildings in the city center are redeveloped, once again attracting higher-income households back to the city and starting the cycle anew. This has taken place, for instance, in cities such as Chicago and Philadelphia. This process, however, has raised some controversies since transforming a neighborhood from low- to high-income may displace the low-income households who live there, a process called gentrification. ...

"Because buildings are durable goods, it can take a long time for a city to move through its lifecycle. When a city’s population is growing, it is profitable to construct new housing because demand and prices for housing are rising, and the city expands rapidly. But when the population declines, existing housing stock doesn’t simply disappear. It can take decades before it is profitable to refurbish or replace a building. The surplus of housing depresses  house prices below the cost of construction, and the city stops growing. Moreover, falling rents may draw lower-skilled and lower-income households into the city, intensifying urban  sorting by income."

The underlying message here, as I hear it, is that areas of cities or cities as a whole can become locked into negative patterns. Say that the positive economic effects of agglomeration are not operating well, and so that part of the city has a lot of low-priced real estate which offers housing for a disproportionate number of low-income people. We know that this dynamic can remain in place for decades. Can anything be done about it?  Pinto and Sablik write:


"If policymakers decide that some intervention is warranted, there are a number of different approaches they could consider. One option is to focus on helping households by giving them the tools to improve their situation. This could involve removing barriers that prevent households from relocating to thriving parts of the city, providing housing vouchers to help them move, or improving transportation networks to reduce commuting costs. An alternative approach is to focus on revitalizing the city itself. This includes revitalizing residential or commercial buildings that have declined or offering incentives to employers to locate in the city and hire local people. Economists have labeled these different approaches people-based and place-based policies, respectively."

However, as Pinto and Sablik discuss, the evidence on the effectiveness of either people-based or place-based approaches is fairly weak. For example, people-based policies include idea like  "moving-to-opportunity" programs that subsidize people in depressed urban areas to relocate to other parts or the urban area. Such programs seem to help young children, but the effects on other age groups are minimal or even negative. Improving the quality of local education is a worthwhile goal, but hard to accomplish. place-based approaches like "enterprise zones" or "urban renewal projects" sometimes show an effect in the specific area that is targeted for the policy, but even when the effects seem positive for that area, a common finding is that economic activity was just relocated. from other nearby areas.

Every city has areas where incomes are lower and social problems are higher, and the geographic location of those areas often seems to remain the same for decades at a time. This experience suggests rather strongly that we don't have any magic-bullet policy tools that will target these areas with strong local economic activity and addressing issues like crime. I worry that some cities have a tendency to focus to much on a magic-bullet solution--the single big project or law that will address problems in part of a city. Instead, cities might be better off if they would focus on providing a decent level of public services to all areas of a city: safe public areas and parks, cleaning up garbage, street repair, well-functioning schools, enforcing the housing code,  libraries and post offices, and the like. Moreover, a city can play a big role by whether it encourages or discourages people and firms who want to upgrade the base of real estate in a certain area of a city, whether it's for business or residential uses.

Finally, readers interested in the evolution of urban areas might also want to look back at "Economics of Gentrification" (December 6, 2016).
Posted by Timothy Taylor at 10:38 AM