The Skeptical View in Favor of an Antitrust Push

Is the US economy as a whole experiencing notably less competition? Of course, pointing to a few industries where the level of competition seems to have declined (like airlines or banking) does not prove that competition as a whole has declined. In his essay, "Antitrust in a Time of Populism," Carl Shapiro offers a skeptical view on whether overall US competition has declined in a meaningful way, but combines this critique with an argument for the ways in which antitrust enforcement should be sharpened. The essay is forthcoming in the International Journal of Industrial Organization, which posted a pre-press version in late February. A non-typeset version is available at Shapiro's website

(Full disclosure: Shapiro was my boss for a time in the late 1980s and into the 1990s as a Co-editor and then Editor of the Journal of Economic Perspectives, where I have labored in the fields as Managing Editor since 1987.)

Shapiro points to a wide array of articles and reports from prominent journalistic outlets and think tanks that claim that the US is experiencing a wave of anti-competitive behavior. He writes:

"I would like to state clearly and categorically that I am looking here for systematic and widespread evidence of significant increases in concentration in well-defined markets in the United States. Nothing in this section should be taken as questioning or contradicting separate claims regarding changes in concentration in specific markets or sectors, including some markets for airline service, financial services, health care, telecommunications, and information technology. In a number of these sectors, we have far more detailed evidence of increases in concentration and/or declines in competition."

Shapiro makes a number of points about competition in markets. For example, imagine that national restaurant chains are better-positioned to take advantage of information technology and economies of scale than local producers. As a result. national restaurant chains expand and locally-owned eateries decline. A national measure of aggregation will show that the big firms have a larger share of the market. But focusing purely on the competition issues, local diners may have essentially the same number of choices that they had before.

A number of the overall measures of growth of larger firms don't show much of a rise. As one example, Shapiro points to an article in the Economist magazine which divided the US economy into 893 industries, and found that the share of the four largest firms in each industry had on average risen from 26% to 32%. Set aside for a moment the issues of whether this is national or local, or whether it takes international competition into account. Most of those who study competition would say that a market where the four largest firms combine to have either 26% or 32% of the market is still pretty competitive. For example, say the top four firms all have 8% of the market. Then the remaining firms each have less than 8%, which means this market probably has at least a dozen or more competitors. 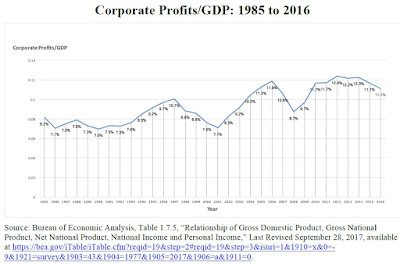 And here's a figure showing the breakdown of corporate profits by industry. 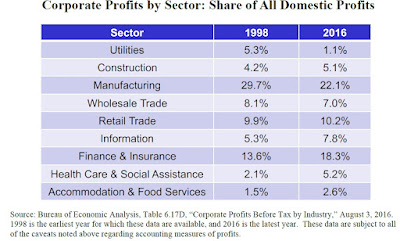 Thus, there is evidence that profit levels have risen over time. In particular, they seem to have risen in the Finance & Insurance sector an in the Health Care & Social Assistance area. But as Shapiro emphasizes, antitrust law does not operate on a presupposition that "big is bad" or "profits are bad." The linchpin of US antitrust law is whether consumers are benefiting.

Thus, it is a distinct possibility that large national firms in some industries are providing lower-cost services to consumers and taking advantage of economies of scale. They earn high profits, because it's hard for small new firms without these economies of scale to compete. Shapiro writes:


"Simply saying that Amazon has grown like a weed, charges very low prices, and has driven many smaller retailers out of business is not sufficient. Where is the consumer harm? I presume that some large firms are engaging in questionable conduct, but I remain agnostic about the extent of such conduct among the giant firms in the tech sector or elsewhere. ... As an antitrust economist, my first question relating to exclusionary conduct is whether the dominant firm has engaged in conduct that departs from legitimate competition and maintains or enhances its dominance by excluding or weakening actual or potential rivals. In my experience, this type of inquiry is highly fact-intensive and may necessitate balancing procompetitive justifications for the conduct being investigated with possible exclusionary effects. ...

"This evidence leads quite naturally to the hypothesis that economies of scale are more important, in more markets, than they were 20 or 30 years ago. This could well be the result of technological progress in general, and the increasing role of information technology on particular. On this view, today’s large incumbent firms are the survivors who have managed to successfully obtain and exploit newly available economies of scale. And these large incumbent firms can persistently earn supra-normal profits if they are protected by entry barriers, i.e., if smaller firms and new entrants find it difficult and risky to make the investments and build the capabilities necessary to challenge them."

What should be done? Shapiro suggests that tougher merger and cartel enforcement, focused on particular practices and situations, makes a lot of sense. As one example, he writes:

"One promising way to tighten up on merger enforcement would be to apply tougher standards to mergers that may lessen competition in the future, even if they do not lessen competition right away. In the language of antitrust, these cases involve a loss of potential competition. One common fact pattern that can involve a loss of future competition occurs when a large incumbent firm acquires a highly capable firm operating in an adjacent space. This happens frequently in the technology sector. Prominent examples include Google’s acquisition of YouTube in 2006 and DoubleClick in 2007, Facebook’s acquisition of Instagram in 2012 and of the virtual reality firm Oculus CR in 2014, and Microsoft’s acquisition of LinkedIn in 2016.  ... Acquisitions like these can lessen future competition, even if they have no such immediate impact."

"I would like to emphasize that the role of antitrust in promoting competition could well be undermined if antitrust is called upon or expected to address problems not directly relating to competition. Most notably, antitrust is poorly suited to address problems associated with the excessive political power of large corporations. Let me be clear: the corrupting power of money in politics in the United States is perhaps the gravest threat facing democracy in America. But this profound threat to democracy and to equality of opportunity is far better addressed through campaign finance reform and anti-corruption rules than by antitrust. Indeed, introducing issues of political power into antitrust enforcement decisions made by the Department of Justice could dangerously politicize antitrust enforcement. Antitrust also is poorly suited to address issues of income inequality. Many other public policies are far superior for this purpose. Tax policy, government programs such as Medicaid, disability insurance, and Social Security, and a whole range of policies relating to education and training spring immediately to mind. So, while stronger antitrust enforcement will modestly help address income inequality, explicitly bringing income distribution into antitrust analysis would be unwise."

In short, where anticompetitive behavior is a problem, by all means go after it--and go after it more aggressively than the antitrust authorities have done in recent decades. But other concerns over big business need other remedies.