The black population is not equally distributed across the United States: not equally across regions of the country, nor within metropolitan areas. This unequal distribution is in substantial part a result of historical event and policy decisions, many of them rooted in racism. As a result, policies that affect certain regions of the country more than others, or certain parts of metropolitan areas more than others, will inevitably have disparate racial effects.

Bradley L. Hardy, Trevon D. Logan, and John Parman lay out the evidence and arguments for these and related claims in "The Historical Role of Race and Policy for Regional Inequality," which appears as a chapter in Place-Based Policies for Shared Economic Growth, edited by Jay Shambaugh and Ryan Nunn (Hamilton Project at the Brookings Institution, September 2018)

Here's a map showing the share of the population that is black on a county-by-county basis across the United States. As the figure shows, most of the predominantly black counties are in the southeastern region. 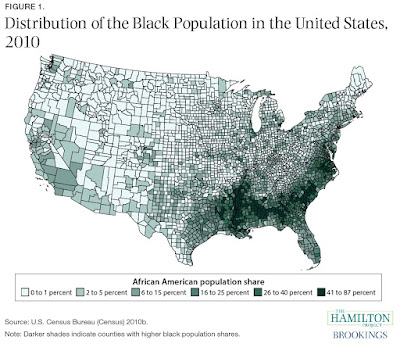 As a measure of economic mobility, the authors cite evidence on "the mean income rank of black children growing up in a household at the 25th income percentile."


"Under complete economic mobility, the expected income rank of the child will simply be the mean income rank for the population, the 50th percentile. If there is no mobility, the expected income rank of the child will be that of their parents, the 25th percentile in this case. ... In counties with a majority black population, a black child born to parents in the 25th income percentile achieves a mean income rank of only 32, barely any movement up the income ladder, while white children from the same counties achieve a mean income rank of 43. Not only do black households tend to live in regions with low incomes, but these regions also experience lower levels of economic mobility, potentially exacerbating regional inequality from one generation to the next. ... [B]lack children growing up in the 25th income percentile reach much lower rungs on the income ladder relative to white children growing up at the same income level in the same commuting zone. ..."

The black population is also distributed unequally across metro areas.

These differences in the concentration of the black population are of course linked closely to historical patterns. For example, the prevalence of rural counties in the south with a high share of black resident of course echoes the patterns set in the aftermath of slavery. The authors write:

As the authors also note, the lack of opportunity for rural southern blacks was reinforced by racism  by individuals, employers, social institutions and government, which affected education, labor markets, and political participation.

This lack of opportunity stirred what is called the "Great Migration" of blacks from the American south to northern cities, a pattern that lasted into the 1960s and which helped to reduce black-white gaps in income and other areas. But when blacks arrived in northern cities, there was rising segregation by race. Some of this was flight of white residents to suburbs outside central cities. When whites moved, the main locations of employers often moved with them.

Another factor was covenants in housing deeds that blocked houses from being sold to non-whites.   For the record, such covenants were not "unenforcable until Supreme Court’s Shelley v. Kraemer decision in 1948. However, racial restrictions were often still written into deeds until it became illegal to do so in 1968 with the passage of the Fair Housing Act." It was also common to link the risk of mortgage lending to the racial composition of a neighborhood, which had long-lasting effects on property values and city housing and economic patterns. 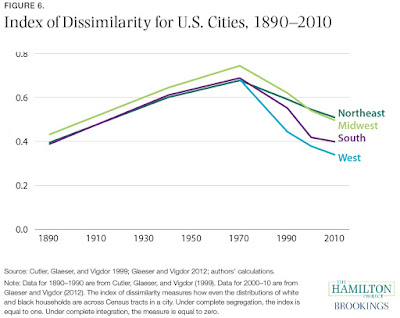 In turn, these patterns of black-white segregation within metro areas have been reflected in other social patterns, like inner-city schools with high shares of black students that do not seem to perform very well, and conflicts in inner cities between areas with a high share of black residents that have high levels of conflict with police and  high rates of incarceration. As the authors write:


"Neighborhoods with a significant share of blacks in America’s major cities have lagged white neighborhoods on key socioeconomic indicators since at least the 1970s, including earnings, poverty, educational attainment, and employment. These gaps in neighborhood amenities and neighborhood quality persist into the 2000s."

There are complex interactions in between economic forces, social forces, individual decisions and location choices, employer decisions, intentionally racist policies, policies not necessarily rooted in racism but with disparate racial effects, and so on. The authors are suitably restrained in making any attempt in this essay to attempt a grand synthesis. But they are not so much building a specific model as making a broader point. As they write, "the majority of historical discriminatory policies are off the books." But the geographic location patterns of the current black population was heavily shaped over the last century-and-a-half by those policies. Moreover, the  geographic location patterns of the black population are closely linked to the continuing inequalities of outcomes experienced by the black population.
Posted by Timothy Taylor at 11:52 AM