The Productivity That Didn't Happen

The bad news is that US productivity growth has been slow for the last 15 years, and in facts for 30 of the last 40 years. But at least other high-income nations are doing worse. Emily Moss, Ryan Nunn, and Jay Shambaugh provide a nice readable overview of productivity fact patterns, along with possible causes and solutions, in "The Slowdown in Productivity Growth and Policies That Can Restore It" (June 2020, Hamilton Project at Brookings).
It's conventional to divide US productivity growth since 1948 into four periods, summarized in this figure. There's the reasonably rapid post-World War II productivity growth from 1948 to 1973, the slowdown from 1973-1995, a 10-year resurgence from 1995-2004, and the return-to-slowdown since then. 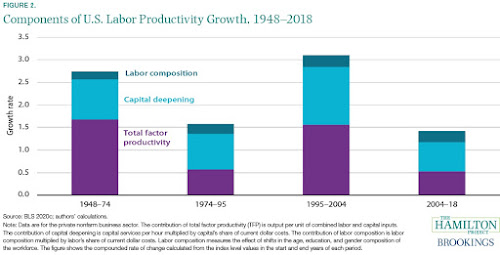 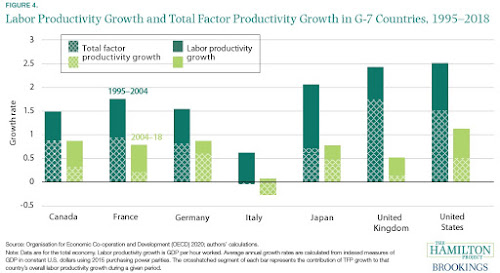 Don't forget that the numbers on the figures above are annual rates. For example, US labor productivity drops from an annual rate of 3.1% from 1995-2004 to an annual rate of 1.4% from 2004-2018. This annual change accumulates over time.  To get a feeling for the importance of this accumulation,  let's say that labor productivity had continued to rise by 3% per year since 2004. The extra growth could have led to gradually higher incomes every year. As a result of labor productivity growing 1.6% per year faster over the last 16 years, the total US economy in 2020 would be 29% larger.
Given that US GDP will be about $22 billion this year, 29% works out to $6.4 trillion larger. For perspective, $6.4 trillion works out to roughly an extra $20,000 in 2020 for every US citizen, including adults and children. This is not a one-time boost, but a permanent and ongoing rise. For people, for government, for social problems, for the environment--every problem is a little easier to solve when the financial constraints are relaxed. But because productivity growth slowed down in 2004, those resources never came into existence.
The reasons for these rises and falls in productivity are largely mysterious to economists. The problem is not a lack of hypotheses, but rather a sense that when you offer lots of possible explanations, perhaps you aren't all that sure about any of them. For example, if the more recent productivity slowdown had kicked in after the Great Recession, one could come up with a hypothesis related to the Great Recession--but it clearly started well before that.
One possible explanation is that this is mostly a mismeasurement problem. The argument here is that GDP doesn't capture the economic gains of new technology, so the productivity gains don't show up in official statistics. There's no doubt that the official statistics are imperfect, but but the question here is whether they somehow became more imperfect circa 2004; that is, they captured the rise in productivity growth and the web pretty well for a decade, but then stopped doing so. There isn't much evidence to support that belief. Moreover, the decline in US productivity after the 1995-2004 burst has been quite broad across industries. To put it another way, it doesn't seem as if productivity is only down in certain harder-to-measure industries.
In addition, while it would certainly be nice to believe that our standard of living is rising in all sorts of ways not measured by actual dollars, our household bills and mortgage debt and taxes and government borrowing need to be paid with actual money, not just with a nebulous feeling of being better off.
While the struggle to explain the timing and breadth of the changes in productivity goes on, some of the intellectual energy has instead shifted toward thinking about what might help reverse the pattern, regardless of its underlying cause. I sometimes like to say that there's the basic formula for productivity is well-understood: it's a combination of human capital, physical capital, and new technology, interacting in an economic environment with incentives for innovation. Here are a few thoughts from Moss, Nunn, and Shambaugh on these issues, with more in the actual report:
On the issue of human capital, America's rise in average education level has slowed down, and the aging population means slower growth in the prime-age labor force. They write:

Slower growth in the prime-age labor force tends to coincide with slower growth in productivity, perhaps because of a reduction in available managerial talent (Feyrer 2007, 2011) or the rate of business formation (Karahan, Pugsley, and Şahin 2019). The aging of the workforce can also place downward pressure on productivity growth by making it more difficult to implement new innovations and processes ...

When it comes to private investment, firms don't seem to be doing a lot more of it. Here's a figure showing investment by firms in the specific area of information processing equipment and software. It's probably not a coincidence that the sharp rise starting in about 1990 was followed by rising productivity a few years later, and conversely that the drop in 2000 was also followed by lower productivity a few years later. 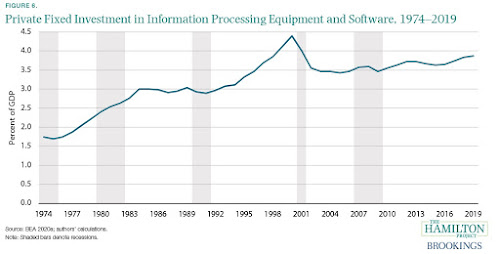 One my my hobby-horses on this blog is the need to increase research and development spending. As the figure shows, total R&D as a share of GDP hasn't risen for decades. But what is changing is that the federal share of R&D which tends to focus on basic research and thus on potential breakthrough innovations is falling, while the business share of R&D which is more likely to focus on near-term development of products is rising. 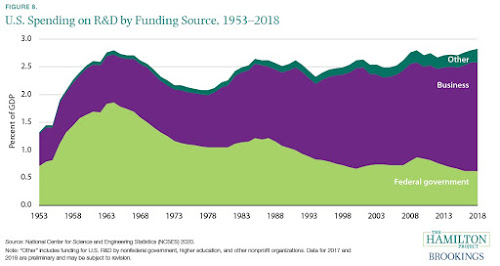 When it comes to increasing productivity, there are a number of other areas that deserve attention, many of which involve trying to strike a better balance: Can we figure out ways to provide inventors with a return that also encourage follow-up inventions by others? Can we figure out ways to encourage competition and limit anticompetitive behavior? Could adjusting rules related to occupational licensing or residential building help labor to become more productive? Could investments in infrastructure for transportation, energy, and communications help labor and industries be more productive?

The only way for the average person in a nation to consume more in the long-run is for that average worker to have higher productivity in the long-run. Yes, for a time it's possible to raise taxes on the rich and transfer to others. It's possible for the government and firms and people to borrow money for a time and raise consumption in the present, too. Redistribution and borrowing are useful for specific circumstances, and for certain times and places, but by themselves, they can't continually raise consumption for the average person. Only rising productivity can do that.
Posted by Timothy Taylor at 2:39 PM