COVID Comparisons Across Countries and US States: A Graphing Tool from the FT

The Financial Times has a useful graphing tool that allows you to compare rates of COVID-19 new cases or deaths, either across countries or across US states. Here are a couple of charts with international comparisons that I made yesterday. Feel free to make your own, and to contemplate them.

This graph show rates of COVID-19 deaths per 100,000 population, based on a seven-day rolling average to smooth the line. On the far right of the diagram, the blue line at the top is the European Union. The purple line just below that is the United Kingdom. The green line below that is Sweden. The pink line is the United States. 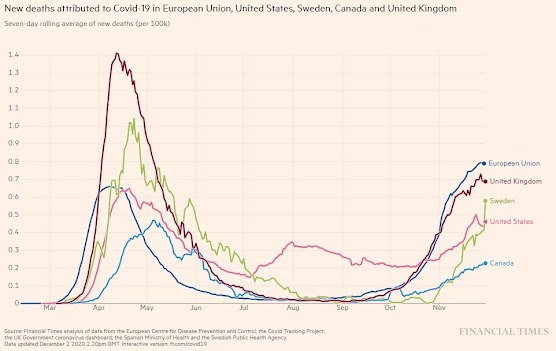 As with most statistics, one can view the glass as half-full or half-empty. The pink line showing US COVID-19 death rates has not so far spike as high as the EU rate. But if one looks back over the summer, the US death rate line was substantially above the EU line.

Perhaps the higher US death rate over the summer will mean a lower death rate this fall? Maybe. But the numbers of new COVID-19 cases gives reason for concern. This graph shows rates of new COVID-19 cases per 100,000 population, again using a seven-day rolling average to smooth the line. The blue EU line for new cases started rising in August and September, and then spiked to well above the US level in September and October, before peaking in early November. The pink US line for new cases started spiking in October, and at least for the moment it seems to have peaked a little later and higher than the EU level--which may presage a  higher US death rate in the weeks to come. The green line showing Sweden's COVID-19 cases was at EU levels last summer, but is now peaking. The United Kingdom seems to be doing a little better than the EU as a whole. The blue line at the bottom showing Canada has done the best of the countries show, but has also seen a substantial recent rise. 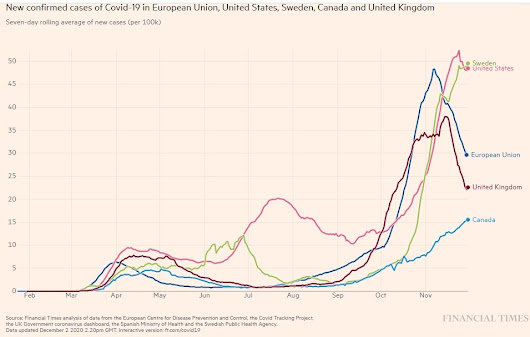 There's a tendency to read these graphs as if they are a judgement on public health authorities, or on the willingness of the public to follow public health advice. This view isn't wrong, but it's also incomplete.  The specifics of the virus and how it interacts with the season and with local human environments gets a say of its own, too.
Posted by Timothy Taylor at 9:00 AM