The percentage of the U.S. adult population that is either working or unemployed and looking for a job is called the labor force participation rate. From the early 1960s to the late 1990s, this percentage rose more-or-less steadily, from 59% to 67%. But since then, starting well before the Great Recession, the labor force participation rate has been falling. In my own Journal of Economic Perspectives, Chinhui Juhn and Simon Potter wrote about "Changes in Labor Force Participation inthe United States" back in the Summer 2006 issue.  Willem Van Zandweghe has a more recent take, with updated evidence, in "Interpreting the Recent Decline in Labor Force Participation" in the Economic Review of the Federal Reserve Bank of Kansas City. 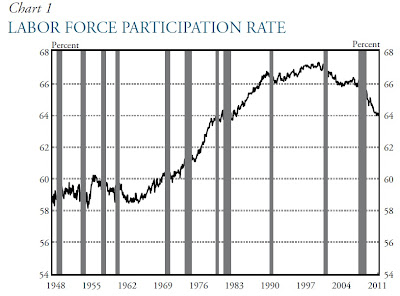 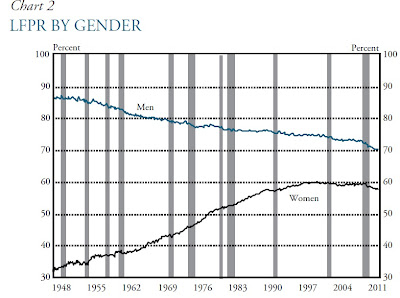 What are these long-term trend factors?

3) Young adults in the 16-24 age group have become less likely to work. This group had a labor force participation rate of nearly 70% back in the 1970s and 1980s, but it has now fallen to about 55%. Part of the decline is that more young people are attending at least some college. Another part of the decline is that for many of the relatively low-skilled in this age group, the low wages they would earn don't seem worth taking a job. 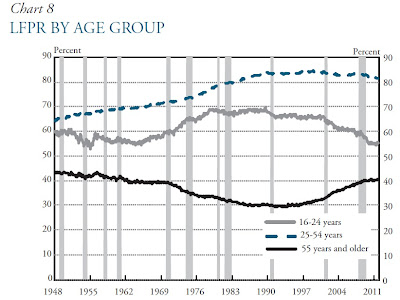 4) The long-term trend of declining male labor force participation rates continues. What are these men doing when they leave the labor force? One doorway out of the labor force for many of them takes the form of applying for disability, which has nearly tripled in the last 10 years from 1 million to 3 million applications per year.  For a discussion of "Disability Insurance: One More Trust Fund Going Broke," see this post from August 11, 2011. 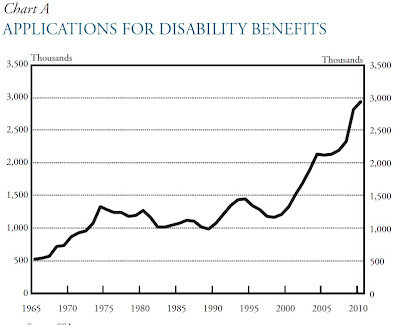 A long-term decline in the labor force participation rate isn't good news for long-term economic growth, nor for the long-term solvency of Social Security and Medicare. There are two particular areas worth focus.