The U.S. Treasury has published "The Financial Crisis Response In Charts." The labels on the charts largely tell the following four-part story: 1) There was a deep financial crisis; 2) The government did things; 3) The crisis did not continue; 4) Therefore, what the government did was beneficial and useful and responsible for the recovery. Even those of us who are generally supportive of many of the steps taken during the worst of the financial crisis late in 2008 and early 2009 can spot some logical flaws in that syllogism.

But two of the charts in particular, about the U.S. banking system, caught my eye. The first one is titled: "The financial industry is less vulnerable to shocks than before the crisis. The panels show two lessons. "Banks have added nearly $400 billion in fresh capital as a cushion against unexpected losses and financial shocks. Banks are also less reliant on short-term funding, which can disappear in a crisis and leave them more vulnerable to panics." 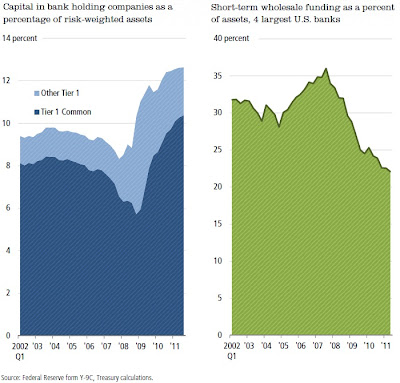 The second panel of interest shows that, relative to the U.S. economy, "The U.S. banking system is proportionally smaller than that of other advanced economies." The horizontal axis shows total assets of banks as a share of the economy of their home country. The four largest U.S. banks by assets are JPMorgan Chase, Bank of America, Citigroup, and Wells Fargo. The vertical axis shows total assets of all commercial banks as a share of GDP. By either measure, U.S. banks are relatively small in international terms. 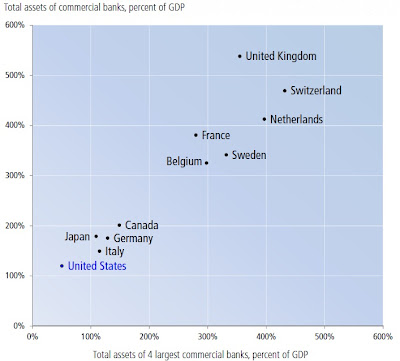 Of course, this comparison is somewhat misleading.  U.S. banks are being compared to the huge U.S. economy, while banks in Belgium and Sweden and Switzerland are being compared to their much smaller national economies, not to overall economy of the European Union.  However, the figure still makes a useful point that while the biggest U.S. banks are enormous, by some standards they aren't so large.

Along similar lines, I blogged on December 7, 2011, about "The Rise of Global Banks in Emerging Markets," where I quoted Neeltje van Horen: "In fact, the world’s biggest bank in market value is China’s ICBC. The global top 25 includes eight emerging-market banks. Among these, three other Chinese banks (China Construction Bank, Agricultural Bank of China, and Bank of China), three Brazilian banks (Itaú Unibanco, Banco do Brasil, and Banco Bradesco) and one Russian bank (Sberbank). While excess optimism might have inflated these market values, these banks are large with respect to other measures as well. In terms of assets all these banks are in the top 75 worldwide, with all four Chinese banks in the top 20."

My broader point is that in thinking about the financial system, it's important not to overemphasize just the large U.S. banks. The U.S. financial system is much larger than the banking system, and includes all the ways of borrowing funds like asset-banked securities, commercial paper, and bonds. In addition, there are enormous banks in other countries as well. In addition, U.S. banks have largely returned to health in terms of holding more assets and being less reliant on short-term financing. Looking ahead, the big issues about stability of the financial system go well beyond the big U.S. banks--although they pose too-big-to-fail issues of their own--and require looking more broadly at international banks and global finance.
Posted by Timothy Taylor at 6:00 AM