Back in my college days in the late 1970s and early 1980s, the standard statistic was that the average pay of a full-time female worker was 59% of the pay for a male worker. Moreover, that proportion had barely changed over the previous two decades since the enactment of the Equal Pay Act of 1963. Now and again, you saw someone wearing a button to give some visibility to this statistic, like this one: Here's the most recent data from the US Census Bureau showing the female-to-male earnings ratio from 1960 to 2014 with the red line. The left-hand part of the red line shows the ratio holding steady at about 59% up through 1980. Since then, the ratio has risen more-or-less steadily to its current level of 79%. The figure comes from Income and Poverty in the United States: 2014 , by Carmen DeNavas-Walt and Bernadette D. Proctor (September 2015, P60-252). 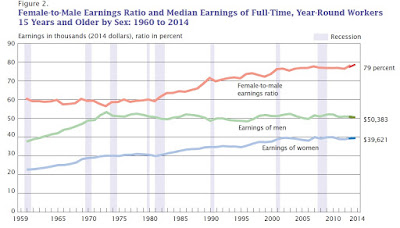 With regard to the first question, there is little reason to believe that legal changes are responsible for why the female-to-male wage ratio started rising around 1980. Many feminists of my acquaintance would be hesitant to accept the proposition that the election of Ronald Reagan in 1980 finally triggered a stronger movement to gender wage equality. The proposed Equal Rights Amendment to the US constitution, which passed Congress in 1972, needed to be ratified by 38 states by 1982 in order to be added to the US Constitution, but fell short by three states.

As women entered the paid labor force in large numbers (of course, women had already been very equal participants in the unpaid labor force before this), they tended to end up in jobs that required little previous labor market experience and offered relatively low pay. In the meantime, as the labor force participation rate of men dropped, men with relatively low job skills and pay levels were more likely to exit the labor force. These contrasting changes in labor force participation patterns by gender help explain why the 59 percent ratio wasn't rising in the 1960s and 1970s (although I will say from personal experience that this argument was not especially welcome on college campuses circa 1980). After a greater share of women had established a foothold in the paid labor market and the average experience level of women had risen, the pay gap for men and women began to narrow.

My other question is whether the pay gap will continue to narrow over time. In more recent years, the labor force participation rates have shown a continuing downward trend for men, while topping and starting to decline for women. But the more important change in the last 10-20 years is in the underlying causes of the gender pay gap. Researchers can use statistical tools to look at measures of education, years of job market experience, job categories, and see if measures like these can help to explain the remaining female-to-male wage gap. A common finding in these kinds of studies is that the biggest part of the remaining female-to-male wage gap is related to children and families. To put it another way, the remainder of the gender gap is less about men vs. women, and more about mothers vs. non-mothers. For example, here's a 1998 study about the "family gap" from the Journal of Economic Perspectives (where I work as managing editor). Also, here's a prominent study looking at graduates from a high-ranking MBA program, which argues that men and women leave the MBA program on very similar earnings trajectories, but as many of the women become mothers, a gender pay gap emerges.

I have no desire to play at being an amateur sociologist/anthropologist/biologist and spout off on the subject of why women are more likely to end up doing child care than men. But I will say that as long as that pattern continues to hold, a gender pay gap will also continue to be apparent.