Two recent reports start by observing that long-term interest rates have been at extraordinarily rock-bottom levels for several years now. But from that common starting point, the analysis of the reports heads in different directions.

The Council of Economic Advisers in a July 2015 report called "Long-Term Interest Rates: A Survey," which notes at the start: "The long-term interest rate is a central variable in the macroeconomy. A change in the long-term interest rate affects the value of accumulated savings, the cost of borrowing, the valuation of investment projects, and the sustainability of fiscal deficits." Ultimately, the CEA report takes the position that the very low long-term interest rates are mostly a matter of supply and demand in the market for loanable funds--and in particular, the result of a high global supply of saving.

In contrast, the Bank of International Settlements in its 85th annual report expresses a concern that long-run interest rates at such low levels for such a long time are not a healthy development. For example, the BIS report states: "Our lens suggests that the very low interest rates that have prevailed for so  long may not be “equilibrium” ones, which would be conducive to sustainable and balanced global expansion. Rather than just reflecting the current weakness, low  rates may in part have contributed to it by fuelling costly financial booms and busts. The result is too much debt, too little growth and excessively low interest rates."

Of course, your view on these two perspectives will in substantial part determine your views about yesterday's decision by the Federal Reserve not to raise its target federal funds interest rate at this time. The short-term federal funds interest rate is a specialized market in which banks and big financial institutions make very short-term loans to each other. The Fed has held that short-term interest rate as near zero percent for seven years now, first as part of its efforts to ameliorate the 2007-2009 recession, and now as part of its effort not to disrupt an upswing. Changing short-run interest rates does not automatically lead to a one-for-one shift in long-run interest rates, because the long-run interest rates are affected by a wide array of supply and demand forces in capital markets. But central bank decisions about short-run rates do have an effect on long-run rates. 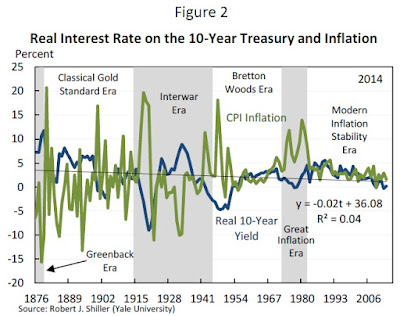 The CEA report offers a detailed and in places somewhat technical analysis of the determinants of long-run interest rates. Here are their key takeaways:


For those not familiar with the Bank of International Settlements, it's been around since 1930. It's membership is made up of central banks, and it's mission is to provide a forum in which those central banks can discuss, collaborate, and interact.

The factual starting point for the BIS report is the same as the CEA report, but the perspective is different. The BIS report opens in this way (references to graphs omitted):


Interest rates have never been so low for so long. They are low in nominal and real (inflation-adjusted) terms and low against any benchmark. Between December 2014 and end-May 2015, on average around $2 trillion in global long-term sovereign debt, much of it issued by euro area sovereigns, was trading at negative yields. At their trough, French, German and Swiss sovereign yields were negative out to a respective five, nine and 15 years. Such yields are unprecedented. Policy rates are even lower than at the peak of the Great Financial Crisis in both nominal and real terms. And in real terms they have now been negative for even longer than during the Great Inflation of the 1970s. Yet, exceptional as this situation may be, many expect it to continue. There is something deeply troubling when the unthinkable threatens to become routine.

Ultra-low long-term interest rates lead to disruptions in the rest of the financial system. As one example, pension funds can be much worse off. BIS writes:

"Such [low interest rates] rates sap banks’ interest margins and returns from maturity transformation, potentially weakening balance sheets and the credit supply, and are a source of major one-way interest rate risk. Ultra-low rates also undermine the profitability and solvency of insurance companies and pension funds. And they can cause pervasive mispricing in financial markets: equity and some corporate debt markets, for instance, seem to be quite stretched. Such rates also raise risks for the real economy. ...  Over a longer horizon, negative rates, whether in inflation-adjusted or in nominal terms, are hardly conducive to rational investment decisions and hence sustained growth."

Another risk is that when low long-term interest rates make borrowing very cheap, it often seems easier for government to address their structural budgetary and economic issues by borrowing more, rather than, well, actually trying to fix them. In the euro area, for example, a focus on how to borrow more and restructure govenment debts in that way seems easier, while dealing with the underlying economic issues underpinning the problems of the euro gets continually postponed. Yet another issue is that low interest rates in high-income countries raise economic risks in emerging markets.


"As monetary policy in the core economies has pressed down hard on the accelerator but failed to get enough traction, pressures on exchange rates and capital flows have spread easy monetary and financial conditions to countries that did not need them, supporting the buildup of financial vulnerabilities. A key manifestation has been the strong expansion of US dollar credit in EMEs [emerging market economies], mainly through capital markets. The system’s bias towards easing and expansion in the short term runs the risk of a contractionary outcome in the longer term as these financial imbalances unwind. ... One thing is for sure: gone are the days when what happened in EMEs largely stayed there."

Notice that none of the BIS concerns are about the risk of a rise in inflation--which it does not think of as a substantial risk. However, the BIS makes a discomfiting comparison. Before the financial crisis, interest rates were low to stimulate the economy and inflation was also low. As we all now know, financial imbalances were building up, in a way that brought a deep recession to the high-income countries around the world. Now, we are again in an environment of low interest rates to stimulate the economy together with low inflation. The argument at the Federal Reserve and other central banks for today's low interest rates is that they are needed because of events that were triggered in part by the low interest rates before the financial crisis. The BIS writes:

After all, pre-crisis, inflation was stable and traditional estimates of potential output proved, in retrospect, far too optimistic. If one acknowledges that low interest rates contributed to the financial boom whose collapse caused the crisis, and that, as the evidence indicates, both the boom and the subsequent crisis caused long-lasting damage to output, employment and productivity growth, it is hard to argue that rates were at their equilibrium level. This also means that interest rates are low today, at least in part, because they were too low in the past. Low rates beget still lower rates. In this sense, low rates are self-validating. Given signs of the build-up of financial imbalances in several parts of the world, there is a troubling element of déjà vu in all this.