Dynamic pricing refers to the practice of changing prices in real time depending on fluctuations in demand or supply.  Most consumers are inured to dynamic pricing in certain contexts. For example, when a movie theater charges more on a Friday or a Saturday night than for an afternoon matinee, or when a restaurant offers an early-bird dinner special, or when mass transit buses or trains offer a lower fare during off-peak hours, or when airlines charge more for a ticket ordered one day before the flight rather than three months before the flight, it doesn't raise many eyebrows.

In other cases, dynamic pricing is more controversial. One classic example is that back in 1999, Coca Cola experimented with vending machines that would automatically rise the price on hot days. The then-chairman, M. Douglas Ivester, pointed out that demand for a cold drink can increase on hot days and said: "'So, it is fair that it should be more expensive. ... The machine will simply make this process automatic.'' However, the reaction from customers stopped the experiment in its tracks. On the other side, in 2012 certain Coca-Cola owned vending machines in Spain were set to cut the price of certain lemonade drinks by as much as half on hot days. To my knowledge, there was no outcry over this policy.

Information technology is enabling dynamic pricing to become more widespread in a number of contexts. The on-line Knowledge magazine published by the Wharton School at the University of Pennsylvania has been publishing some readable commentary on  dynamic pricing. "The Promise — and Perils — of Dynamic Pricing" (February 23, 2016) offers an overview of the arguments with links to some research.  In "Frustrated by Surge Pricing? Here’s How It Benefits You in the Long Run" (January 5, 2016)  Ruben Lobel and Kaitlin Daniels discuss how it's important to see the whole picture--both higher prices at peak times, but also lower prices at other times. In "The Price Is Pliant: The Risks and Rewards of Dynamic Pricing" (January 15, 2016), Senthil Veeraraghavan looks at the choices that sellers face in considering dynamic pricing if they are taking their long-term relationships with customers into account.

Many of the most current examples seem to involve the entertainment industry. For example, the St. Louis Cardinals baseball team uses "a dynamic pricing program tied to its ticketing system in which the team changes ticket prices daily based on such factors as pitching match-ups, weather, team performance and ticket demand." Some ski resorts are adjusting prices based on demand and recent snowfall. Disneyland recently announced a plan to raise admissions prices by as much as 20% on days that are historically known to be busy, while lowering them on other days.
These examples are worthy of study: for example, one paper points out that if a seller only uses dynamic pricing to raise prices on busy days, but doesn't correspondingly lower prices to entice more people on on non-busy days, it can end up losing revenue overall. But at the end of the day, it's hard to argue that these industries involve any great issue of fairness or justice. If you don't want to go to Disneyland or a certain ski resort, then don't go. Sure, sellers in the entertainment industry should be very cautious about a perception that they are jerking their customers around. But there's now an active online market for reselling tickets for a lot of entertainment events, and prices in that market are going to affect last-minute supply and demand factors.

The current controversies over dynamic pricing often seem to bring up Uber, with its policy of having fares that rise during peak times. Uber released a research paper in September 2015 called "The Effects of Uber’s Surge Pricing: A Case Study," by  Jonathan Hall, Cory Kendrick, and Chris Nosko. Part of the paper focuses on the evening of March 21, 2015, when Ariana Grande played a sold-out show at Madison Square Garden. When the concert let out, Uber prices surged: more specifically, the usual Uber price was raised by a multiple of "1.2 for 5 minutes, 1.3 for 5 minutes, 1.4 for 5 minutes, 1.5 for 15 minutes, and 1.8 for 5 minutes." Here's the pattern that emerged in the market. 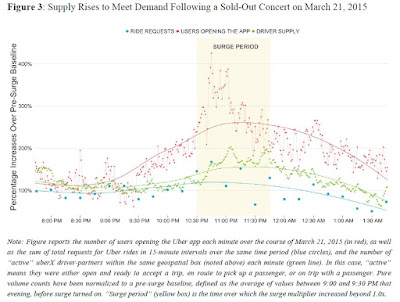 The red dots show the pattern of people opening the Uber app after the concert; the red line is smoothed out to show the overall pattern. The blue dots and the blue line show the actual ride request. Notice that this rises, but not by as much, probably in part because some of those who looked at the higher surge price decided it wasn't worth it, and found another way of getting home. The green dots and green line show the rise in Uber drivers in the area, with the rise presumably occurring in part because drivers were attracted by the surge price.

I don't think even the authors of the paper would make strong claims here that Uber surge pricing worked perfectly on the night of March 21, 2015. But it did get more cars on the streets, and it did mean that people willing to pay the price had an additional option for getting home.

Those interested in a fuller analysis of Uber might want to track down "Disruptive Change in the Taxi Business: The Case of Uber," by Judd Cramer and Alan B. Krueger. (It's downloadable for free as  Princeton Industrial Relations Working Paper #595, released December 2015, and also was released in March 2016 as National Bureau of Economic Research Working Paper 22083.) Their estimate suggests that "UberX drivers spend a significantly higher fraction of their time, and drive a substantially higher share of miles, with a passenger in their car than do taxi drivers." They write:


"Because we are only able to obtain estimates of capacity utilization for taxis for a handful of major cities – Boston, Los Angeles, New York, San Francisco and Seattle – our estimates should be viewed as suggestive. Nonetheless, the results indicate that UberX drivers, on average, have a passenger in the car about half the time that they have their app turned on, and this average varies relatively little across cities, probably due to relatively elastic labor supply given the ease of entry and exit of Uber drivers at various times of the day. In contrast, taxi drivers have a passenger in the car an average of anywhere from 30 percent to 50 percent of the time they are working, depending on the city. Our results also point to higher productivity for UberX drivers than taxi drivers when the share of miles driven with a passenger in the car is used to measure capacity utilization. On average, the capacity utilization rate is 30 percent higher for UberX drivers than taxi drivers when measured by time, and 50 percent higher when measured by miles, although taxi data are not available to calculate both measures for the same set of cities. Four factors likely contribute to the higher utilization rate of UberX drivers: 1) Uber’s more efficient driver-passenger matching technology; 2) Uber’s larger scale, which supports faster matches; 3) inefficient taxi regulations; and 4) Uber’s flexible labor supply model and surge pricing, which more closely match supply with demand throughout the day."

However, I'd argue that the two up-and-coming examples of surge pricing that could have the biggest effect on the the most people involve electricity and traffic jams. In the case of variable prices for electricity, a policy of charging more for electricity on hot days will encourage more people to ease back on their use of air conditioning at those times and look for opportunities to conserve, which in turn means less chance of power outages and less need to use expensive back-up generating capacity. A policy of charging higher tolls on congested roads will encourage people to find other ways to travel, and provide a market demand for when building additional lanes of highway is really worth doing.  As these examples suggest, the economic theory behind dynamic pricing or "surge pricing" is well-understood. When the quantity demanded of a good or service rises and falls at predictable times, broader social benefits emerge from charging more at that time.

This economic logic even applies in what is surely the most controversial case of surge pricing, which is when prices of certain goods rise either just before or just after a giant storm or other disaster. The higher price--often attacked as "price gouging"-- gives buyers an incentive not to purchase and hoard the entire stock, and it gives outside sellers an incentive to hop in their pick-up trucks and vans and bring more of the product to the disaster area. What's worse than being in a disaster area and having to pay extra for certain key goods? Being in a disaster area where those goods aren't available at any price, because the price stayed low and they were sold out before you arrived.

The ongoing gains in information technology are only going to make dynamic pricing more common, because it is only going to become easier both to track changes in demand either historically or in real time and also to make price adjustments in real time (think of the ability to adjust electricity bills or road tolls, for example).  There are going to be changes that will feel like abuses. For example, I wouldn't be surprised if some online retailers already have software in place so that if there is a demand surge for some product, the price jumps automatically. Of course, many of those who want to push back against companies that use surge pricing, like Uber, will have no problem with personally using that same information technology to re-sell their tickets to a highly demanded or sold-out event at well above face-value.