Most of us use a fair number of $20 bill, and maybe a $50 or $100 bill every now and again. But of the total US currency in circulation, 78% is held in the form of $100 bills. To put it differently the $1,014 billion outstanding in $100 bills is the equivalent of about 3,000 $100 bills for every person in the United States. I've noted this phenomenon before: for example, here and here. Peter Sands argues that it's time to do something about it in "Making it Harder for the Bad Guys:The Case for Eliminating High Denomination Notes," which was published in February 2016 by the Mossavar-Rahmani Center for Business & Government at the Harvard Kennedy School (Working Paper #52). He writes:


Our proposal is to eliminate high denomination, high value currency notes, such as the €500 note, the $100 bill, the CHF1,000 [Swiss franc] note and the £50 note. Such notes are the preferred payment mechanism of those pursuing illicit activities, given the anonymity and lack of transaction record they offer, and the relative ease with which they can be transported and moved. By eliminating high denomination, high value notes we would make life harder for those pursuing tax evasion, financial crime, terrorist finance and corruption. ...

To get a sense of why this might matter to criminals, tax evaders or terrorists, consider what it would take to transport US$1m in cash. In US$20 bills, US$1m in cash weighs roughly 110lbs and would fill 4 normal briefcases. One courier could not do this. In US$100 bills, the same amount would weigh roughly 22lbs and take only one briefcase. A single person could certainly do this, but it would not be that discrete. In €500 notes, US$1m equivalent weighs about 5lbs and would fit in a small bag. ... It should be no surprise that in the underworld the €500 note is known as a “Bin Laden”.

For example, consider the cross-border flows of cash between the United States and Mexico from drug trafficking. These amount to billions, which in turn means thousands or tens of thousands of trucks, pick-ups and individual couriers carrying cash. As pointed out earlier, interdiction rates are very low: against cross-border flows of the order of US$20-30bn per year, total seizures in the decade to 2013 amounted to under US$550m. Suppose the US$100 bill was eliminated and the drug traffickers switched entirely to US$50 bills. All else equal, the number of trucks, pick-ups and couriers would have to double. Costs and interdiction rates would probably more than double. Taking the logic further, suppose US$50 issuance was constrained so that the drug traffickers had to rely largely on US$20 bills. The transportation task would increase by up to five times. It would be very surprising if this did not have a very significant impact on costs and interdiction. ...

Once the decision is made to eliminate high denomination notes, there are a range of options about how to implement this, which vary in pace and impact. These are not examined in any depth in this paper. However, the most straightforward option is very simple: stop issuing the highest denominations and withdraw the notes whenever they are presented to a bank. More assertive options would put restrictions on where and how they can used (e.g., “no more than 20 on any one transaction”) or put a maximum value on permissible cash transactions (as Italy has done). The most aggressive option would be to put a time limit on how long the high denomination notes would be honored. However, this would be contrary to the established doctrines of a number of central banks, which continue to honor withdrawn notes many years after the event.

As Sands readily recognizes at a number of places throughout the article, the case against big bills isn't an easy one to prove with ironclad systematic evidence, because no one really knows where the big bills are. The exception seems to be Japan, where lots of people carry and use 10,000 yen notes in everyday life.  But in other countries, a lot of the currency consists of big bills that the average person rarely sees. 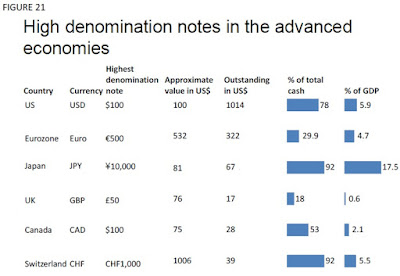 Thus, Sands's argument tried to piece together the bits and pieces of evidence that do exist. At least in my reading, the attempt is more successful in some cases than others. For example, while the cash economy certainly contributes to tax evasion, it's not clear to me that very large numbers of large-denomination bills are the main issue here.

However, the importance of large-denomination bills in moving the profits of the illegal drug trade seems pretty clear. Sands writes:


"By far the largest quantum of income from transnational organized crime is derived from the illicit production and sale of narcotics. UNODC estimates drug-trafficking revenues amount to about 0.4-0.6% of global GDP, or roughly US$300-450bn. ... In the drug economy, cash dominates. Sales of illicit narcotics are almost exclusively conducted as cash transactions. As a result, large amounts of currency accumulate at collection points and across supply lines over relatively short periods of time. Storing, transporting and smuggling the proceeds of drug sales is a key operational challenge for international syndicates keen to hide the proceeds of their crimes from authorities. Cash derived from sales across the United States is typically taken to regional counting houses in major cities, converted into higher denomination notes, vacuum sealed to further reduce bulk then “concealed in the structure of cars or articulated trucks that are hitherto unknown to law enforcement”. The United States Custom and Border Patrol confirm that most proceeds from illicit drugs are transported as bulk cash, with an estimated US$20-30bn in currency crossing from the United States across the border with Mexico each year. Indeed, as governments have increased scrutiny and control over formal payment systems, cash smuggling has become the principal mechanism for distributing proceeds through global drug production chains."

Sands also makes a strong case that large-denomination bills play a substantial role in human trafficking and human smuggling, cash plays a large role, "not least because the ability to move large amounts of money across borders without detection is a critical part of the business model." ISIS seems to rely for its financing on flows of large-denomination bills, too:


"The biggest source of money for ISIS is oil smuggling, estimated at its peak to be around US$500m per year, but probably significantly less now, given air-strikes on pumping stations, refineries, pipelines and oil tanker convoys by the US-led coalition, as well as the decline in the oil price. There is very little reliable information on how the oil is sold, but it appears that much is sold for cash, largely US dollars (and given the volumes almost certainly US$100 bills). Sometimes payments are made to the bank accounts of ISIS sympathizers elsewhere, with the money then couriered into ISIS territory in cash (again, almost certainly in US$ or Euro)."

It's easy enough to come up with reasons why some law-abiding people, whether in the US or in countries beset by economic or political instability, might want to hold a stash of $100 or €500 notes. It's also easy to suggest ways that if the large-denomination bills were phased out, other stores of value like diamonds or gold or anonymous electronic money like Bitcoin might take its place.  Perhaps the most creative argument I've heard for keeping the large-denomination bills is that the authorities could figure out a way to mark some of them in a way that could be traced, and then could follow the large-denomination bills to the criminals and the terrorists.

But without making all this too complicated, the basic tradeoff here is whether it's worth inconveniencing a relatively small number of law-abiding people with legitimate needs for large-denomination bills in exchange for, as the title of Sands's paper says, "making it harder for the bad guys." One interesting fact is that in exchange rate markets, large-denomination bills actually trade at above face value, presumably because of their ability to maintain and transport value. 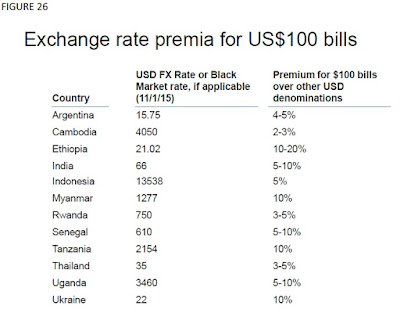 Jérémie Cohen-Setton offers a useful overview of the arguments with links to a number of comments in a blog post on "The elimination of High Denomination Notes" (March 7, 2016) at the website of Bruegel, a European think-tank.