A Lobster Supply and Demand Story

On the principle that you can never have too many supply and demand stories at hand, contemplate the market for lobsters. In recent years, supply has climbed dramatically. For a time, demand climbed as well, especially with additional global demand from China and elsewhere. But the price/pound received by lobster fishermen peaked back in 2005, and now has fallen to a multi-decade low.

From the State of Maine Department of Marine Resources, here's a graph showing the size of the lobster catch and total value of the catch.The total quantity of Maine lobsters caught doubled from 2007 to 2012. It nearly quintupled from 1990 to 2012. In recent decades, the rules for assuring that the lobster catch is sustainable have been tightened, so this doesn't seem to be a case of aggressive overfishing. Instead, it seems that the water temperature off the Maine coast has been rising in a way that increases the lobster catch. Here's a useful overview from the Financial Times ( Neil Munshi, "Lobster industry squeezed by oversupply," August 7). 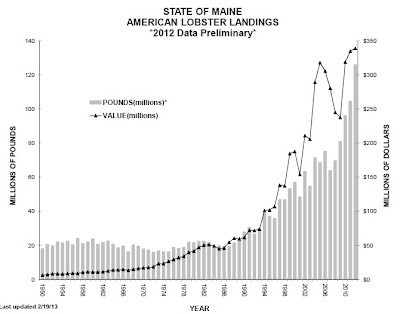 Given total quantity of lobsters and total value of the catch, both shown in the graph above, one can infer the price. At the bottom of this post I'll append a table of lobster data from the Maine state government: total quantity of Maine lobsters caught, total price, and then average price per pound.

The graphs shows that as the lobster catch started rising in the late 1980s and into the 1990s, the total value of the catch rose just as fast, or even a little faster, suggesting that nominal prices for lobsters were rising. There is price spike around 2005, which seems related to a rise in global demand. But the quantity just keeps rising. Nominal prices received by lobster fishermen fell from a peak of $4.63/pound in 2005 to $2.69/pound in 2012.

Lobster-fishing is a competitive industry, with many small producers and a few relatively large ones. As long as the fishermen are following the guidelines for assuring that the catch is biologically sustainable, there's no reason to expect that a cartel will form to hold down supply. Thus, the main hope for beleaguered lobster fishermen is a surge in  demand, perhaps as the US economy recovers or as lobster becomes more widely used in ways that have not been traditional outside of New England. Lobster mac-and-cheese? Lobster pizza? 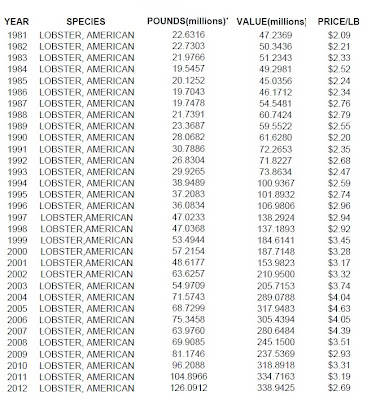