Updates on the US Migration Puzzle

The migration puzzle is that while Americans tend to think of themselves as a country where migration is commonplace, the actual rate of migration has been falling since about 1980. Raven Molloy, Christopher L. Smith, and Abigail Wozniak provide a nice overview of the changes in "Internal Migration in the United States" in the Summer 2011 issue of the  Journal of Economic Perspectives. (Full disclosure: I've been holding down the Managing Editor job at JEP since the tail end of the Reagan administration. I posted about the Molloy, Smith, and Wozniak article here, soon after it was published. ) Since then, there are a couple of recent developments: some new evidence that the migration rate may be turning up a bit, and some new explanations for why it declined.


William Frey presents some recent evidence on the within-the-U.S. migration rate in a short overview article in the Milken Institute Review, July 2013. He writes: "In 2011-12, 14 states (most of
them in the Sun Belt) showed bigger gains than the previous year. Phoenix picked up 37,000 intranational migrants, compared with just 4,000 the year before. At the same time, 27 states, most in the Snow Belt, were losing migrants at an accelerated pace. Metro New York, for example, lost 128,000, compared to 99,000 in the prior 12 months. To be sure, Snow Belt to Sun Belt flows are
not close to their peaks, or even to normal levels. In 2005-6 New York lost 290,000 migrants,
while Phoenix gained a tad less than 100,000. But there is clearly a thaw." 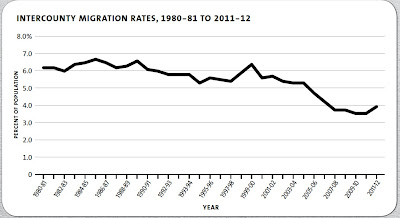 Explaining the decline in within-U.S. migration since the late 1980s or early 1990s migration has proven difficult. It's easy to suggest possible reasons. For example, perhaps as the average age of America's population rises, people become less likely to move. Or perhaps the increase in two-earner couples makes people less likely to move. But these kinds of explanations can easily be tested against the data: for example, by looking at areas that have more or less elderly people, or areas that have bigger or smaller shares of two-earner couples, and comparing mobility rates. As Malloy, Smith and Wozniak pointed out in their 2011 JEP article: "Migration rates have fallen for most distances, demographic and socioeconomic groups, and geographic areas. The widespread nature of the decrease suggests that the drop in mobility is not related to demographics, income, employment, labor force participation, or homeownership."

However, Greg Kaplan and Sam Schulhofer-Wohl have written "Understanding the Long-Run Decline in Interstate Migration ," published as Working Paper 697 by the Minneapolis Federal Reserve. Their paper is technical research economics, and thus not an easy read for the uninitiated, but the basic findings can be explained easily enough. They write:

"We show that micro data rule out many popular explanations for this change [of lower migration rates], such as aging of the population or changes in the number of two-earner households. But the data do support two novel theories. The rst theory is that labor markets around the country have become more similar in the returns they o er to particular skills, so workers need not move to a particular place to maximize the return on their idiosyncratic abilities. The second theory is that better information--due to both information technology and falling travel costs--has made locations less of an experience good, reducing the need for young people to experiment with living in di erent places. We build a model that makes these ideas precise and show that a plausibly calibrated version is consistent with cross-sectional and time-series patterns."


As Kaplan and Schulhofer-Wohl readily admit, just how much of the change in migration is explained by these factors is not yet clear: it could be as little as one-third, or as much as all of it. I'm sure future research will try to narrow this down. They also provide a useful compact explanation of why the level of migration, and the reasons why it slowed down, matter for labor markets and policy-makers (in what follows, citations are omitted).

"Many policymakers have worried that the decline in migration heralds a less-flexible economy where workers cannot move to places with good jobs. In such an economy, the labor market might adjust more slowly to shocks, potentially prolonging recessions and reducing growth. Low migration has thus been proposed as an explanation for the slow recovery from the 2007-'08 financial crisis. But the causes of decreased migration that we identify suggest that the economy may not be less flexible after all. Rather, low migration means that workers either do not need to move to obtain good jobs or have better information about their opportunities. In either case, the appropriate policy response may diff er from the appropriate response to a decrease in workers' ability to move. Thus, understanding the causes of the decline in gross migration is an important goal for economists."