Declining Competition in US Markets?

Economists tend to like competition between firms. Competition between firms is good for consumers. It helps keep prices low, and it also encourages creation of new products, new varieties of existing products, and building a reputation for quality. Competition is good for workers, too. It's a lot nicer to be a worker in a job market with a bunch of different potential employers, rather than just one or two. When situations arise where it's hard for competing firms to function, like providing water or electricity to homes, economists often try to find ways to mimic the incentives that competition would provide.

Thus, it's troublesome to see a range of evidence--not fully conclusive but certainly suggestive--that competition is declining in many US markets.  Some of this evidence is summarized in a Council of Economic Advisers report from April 2016, called Benefits of Competition and Indicators of Market Power.  The chair of the CEA, Jason Furman, discusses that report and provides some additional context in his September 16 lecture "Beyond Antitrust: The Role of Competition Policy in Promoting Inclusive Growth," delivered at the Searle Center Conference on Antitrust Economics and Competition Policy at the Northwestern University Law School.

The US Census Bureau does an Economic Census of all US firms once every five years. The results for the 2012 Economic Census are now becoming available. Here's one comparison from the CEA report showing the share of sales by the top 50 firms in various industries, comparing 1997 and 2012. 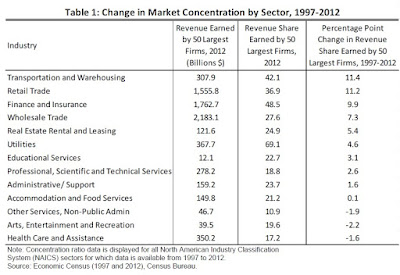 A number of studies of individual industries also show a drop in competition. Furman summarizes some of this evidence in his recent talk. Furman says (footnotes omitted):


Along similar lines, The Economist (2016) found that in 42 percent of the roughly 900 industries examined, the top four firms controlled more than a third of the market in 2012, up from 28 percent of industries in 1997. ... These broad trends are consistent with a number of industry-specific studies tracking concentration over longer periods of time:

• In financial services, a study found that the loan market share of the top ten banks increased from about 30 percent in 1980 to about 50 percent in 2010 (Corbae and D’Erasmo 2013).
• The share of revenues held by the top four firms increased between 1972 and 2002 in eight of nine agricultural industries tracked in a Congressional Research Service study (Shields 2010).
• According to Gaynor, Ho, and Town (2015), hospital market concentration increased from the early 1990s to 2006. The authors found that the average Herfindahl-Hirschman Index (HHI), a commonly used measure of market concentration, increased by about 50 percent to about 3,200, the level associated with just three equal-sized competitors in a market.
• Wireless providers saw increased concentration, with the FCC (2015) finding that the average HHI in the markets they examined increased from under 2,500 in 2004 to over 3,000 in 2014.
• Railroad market concentration increases between 1985 and 2007 have been documented by Prater et al. (2012).

The CEA report and Furman's talk both offer a number of possible reasons for the fall in competition, but there's one reason they don't emphasize that seems to me worth mentioning. In some sectors, including finance and health care, dramatic changes in regulations have tended to increase the size of firms, because larger firms typically find it easier to bear the costs of in-depth regulations. Indeed, there are a number of cases in which large firms don't fight too hard against regulation, because they know that extensive regulation can tend to hinder or block the entry of new firms.


I mentioned at the start that this kind of evidence about less competition isn't conclusive. One main reason for that caveat is that competition is really about the choices available to consumers, not the number or size of firms.  To understand this distinction, imagine a situation in which the US economy has thousands of small banks, but each one operates only in a single city or town. In contrast, imagine a situation in which the US economy has only five large banks, but they are all available online to everyone in the US economy. Based on the number of banks, the the situation with many small banks might appear to have more competition. But if you are living in a given small or medium-sized town, you might have more choices with five big banks available online, rather than just one small bank that is operating in your town.

Moreover, firms can a variety of pricing and information strategies so that once you have signed up with one of them, the costs of switching become quite high, and the functional amount of day-to-day competition between them is diminished. Thus, in-depth studies of competition need to look not just at number of firms or share of total sales, but at the ways in which firms are actually competing for customers--and the realistic choices that customers actually have.

With such concerns duly notes, the US economy does seem to be going through a period of diminished competition in many markets. Consumers, beware.