One of the most dispiriting patterns of socioeconomic inequality is that an academic achievement gap is already apparent for children entering kindergarten. Thus, I was intrigued by the evidence collected by Sean F. Reardon and Ximena A. Portilla that the white-black and white-Hispanic gaps in academic abilities of kindergartners appear to have lessened between 1998 and 2010. Their evidence appears in
"Recent Trends in Income, Racial, and Ethnic School Readiness Gaps at Kindergarten Entry," published in the July-September issue of AERA Open (that is, a journal of the American Educational Research Association, 2:3, pp. 1-18).

Here's how Reardon and Portilla summarize the evidence:


"Data from three large, nationally representative samples of kindergarten students indicate that on standardized tests, income and, to some extent, racial/ethnic gaps in school readiness have narrowed over the last dozen years (see Figure 3 for summary of these trends). The declines in income gaps and White-Hispanic gaps in academic skills at kindergarten entry are moderately large and statistically significant; the estimated declines in White-Black math and reading gaps are somewhat smaller, are not statistically significant in reading, and are only marginally significant in math. The evidence regarding trends in gaps in other measures of school readiness are less clear. Racial/ethnic gaps in teacher-reported measures of self-control and approaches to learning declined by 25% to 50%, while the income gap in teacher-reported externalizing behavior increased by 25%." 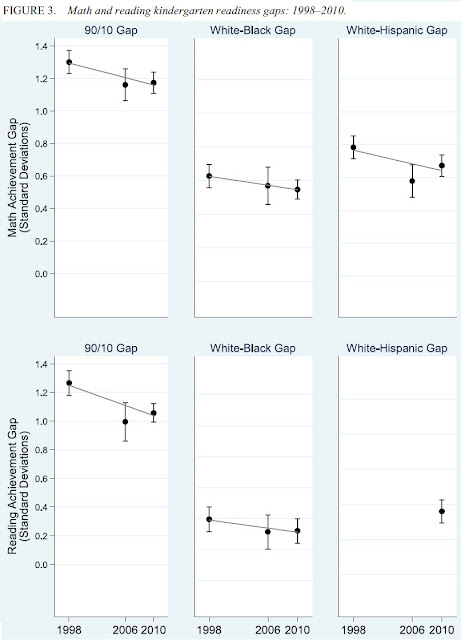 
"How meaningful are these changes? The income achievement gaps in kindergarten entry math and reading declined at the rate of 0.008 and 0.014 standard deviations per year, respectively, over the 1998–2010 period. To put this into context, Reardon (2011) found that the 90/10 income achievement gap grew by roughly 0.020 standard deviations per year among cohorts born in the mid-1970s to those born in the early 1990s. So the rate of decline in the kindergarten readiness 90/10 income gaps appears to be somewhere between 40% and 70% as rapid as the rate of increase in the gap in the prior two decades. Looked at this way, the rate of decline from 1998 to 2010 is not trivial. Nonetheless, the gaps were roughly 1.25 standard deviations in 1998; at the rates that the gaps declined in the last 12 years, it will take another 60 to 110 years for them to be completely eliminated. The rates of decline in the White-Hispanic and White-Black math gaps are similar in magnitude."

The authors are providing evidence here, not analyzing potential causes. But they do offer some informed speculation on causes.


"The most obvious candidate explanation for this decline is perhaps the changes in preschool enrollment patterns over this period. Both the income gap and the White-Hispanic gap in preschool enrollment rates declined since the early 1990s; the White-Black gap in preschool enrollment was unchanged over the same period. These trends are consistent with our finding here that the income and White-Hispanic school readiness gaps declined significantly, while the White-Black gap declined less (and at a rate not distinguishable from zero at conventional levels of significance). Of course, the correlation of preschool enrollment gap trends and school readiness gap trends does not prove that the first caused the second, but it does suggest that further investigation of preschool enrollment trends as a possible primary cause of the narrowing readiness gaps would be informative. We also suggest that increases in child health insurance rates among the near poor may have played a role in these improvements. Another category of explanation might be cultural changes in parenting practices that have increased low-income children’s exposure to cognitively stimulating activities at home. An investigation of these possible causes is beyond the scope of this article, however.

Kindergarten readiness is quite important. In another part of the article, the authors point out that educational attainment gaps appear to have fallen for fourth-graders--but the gains are mostly because of a lower gap at kindergarten, not because schools are doing a better job at reducing the pre-existing gaps at kindergarten.

As I've noted in posts over the years, the evidence on how preschool improves later academic performance is weaker than I would like it to be ("Head Start is Failing Its Test," January 29, 2013; "Preschool for At-Risk Children, Yes; Universal Preschool, Maybe Not," May 23, 2013). I would like to see some additional effort put into starting and evaluating programs to affect "The Parenting Gap for Pre-Preschool" (September 17, 2013).