Foreign direct investment refers to a situation when a foreign firm invests in an affiliate located in the United States in a substantial enough way that it gains some voice in the management of the enterprise. This is often defined in terms of having ownership of at least 10 percent of the voting stock of the company.  After an inflow of $348 billion in foreign direct investment to the US economy in 2015, the total stock of foreign direct investment in the US economy is $2.9 trillion. Rudy Telles Jr. lays out these facts and other evidence in "Foreign Direct Investment in the United States: Update to 2013 Report," written by  for the Economics and Statistics Administration of the U.S. Department of Commerce (ESA Issue Brief #02-16, June 20, 2016).

Here's a figure showing the pattern of FDI into the U.S. economy on a year-to-year basis. 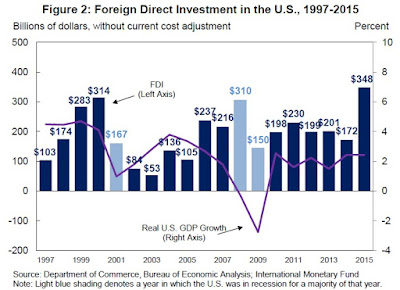 Here are some bullet points from Telles about key patterns (footnotes omitted):


The Telles report is focused on basic evidence of FDI inflows to the United States. For a global perspective, see "Snapshots of Foreign Direct Investment Flows" (September 8, 2015), or the wealth of data in the UNCTAD World Investment Report 2016, which is the canonical source for data on global FDI flows.

I would add that the growth of foreign direct investment fits with other emerging patterns in international trade. For example, companies that use global supply chains will often find it useful to have a substantial ownership share in many of the links of that chain--which means more foreign direct investment. When exporting services, it will often be useful to have a physical presence in the country where the buyers of those services are located, to improve both communication and marketing. Clearly, it is  increasingly unwise to assume that because a good or services is produced in the geographical area of a certain country, it is also being produced by a company that is owned by investors from that same country.