I am now in my 35th year as Managing Editor of the Journal of Economic Perspectives. The JEP is published by the American Economic Association, which decided about a decade ago--to my delight--that the journal would be freely available on-line, from the current issue all the way back to the first issue. You can download individual articles or the entire issue, and it is available in various e-reader formats, too. Here, I'll start with the Table of Contents for the just-released Spring 2021 issue, which in the Taylor household is known as issue #136. Below that are abstracts and direct links for all of the papers. I will probably blog more specifically about some of the papers in the next week or two, as well. 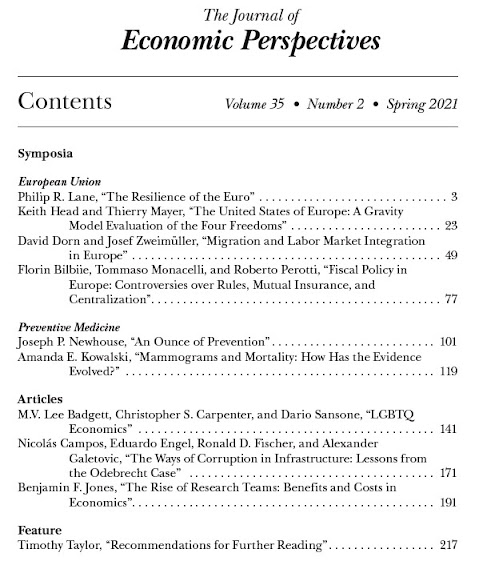 ______________________________________
Symposium on the European Union
"The Resilience of the Euro," by Philip R. Lane
Over 2014–2019, the euro area charted a substantial post-crisis economic recovery while also reducing macro-financial vulnerabilities. The array of post-crisis institutional reforms has improved the capacity of the euro area to withstand adverse shocks, even if the narrowing of imbalances also came at a high cost (especially in the most indebted member countries). The pandemic has provided a new test: the combination of a common central bank and the enlargement of the common fiscal capacity has provided substantial policy support and fostered a narrowing in risk premia, despite significant differences in levels of public debt and exposures to the pandemic shock. While the resilience of the euro is sure to be tested further in the coming years, the extent of the underlying political backing for the common currency should not be underestimated.
Full-Text Access | Supplementary Materials

"The United States of Europe: A Gravity Model Evaluation of the Four Freedoms," by Keith Head and Thierry Mayer
One of the pillars of the 1957 Treaty of Rome that ultimately led to the European Union is the commitment to the four freedoms of movement (goods, services, persons, and capital). Over the following decades, as the members expanded in numbers, they also sought to deepen the integration amongst themselves in all four dimensions. This paper estimates the success of these policies based primarily on a gravity framework. Distinct from past evaluations, we augment the traditional equation for international flows with the corresponding intra-national flows, permitting us to distinguish welfare-improving reductions in frictions from Fortress-Europe effects. We complement the gravity approach by measuring the extent of price convergence. We compare both quantity and price assessments of free movement with corresponding estimates for the 50 American states.
Full-Text Access | Supplementary Materials

"Migration and Labor Market Integration in Europe," by David Dorn and Josef Zweimüller
The European labor market allows for the border-free mobility of workers across 31 countries that cover most of the continent's population. However, rates of migration across European countries remain considerably lower than interstate migration in the United States, and spatial variation in terms of unemployment or income levels is larger. We document patterns of migration in Europe, which include a sizable migration from east to west in the last twenty years. An analysis of worker-level microdata provides some evidence for an international convergence in wage rates and for modest static gains from migration. We conclude by discussing obstacles to migration that reduce the potential for further labor market integration in Europe.
Full-Text Access | Supplementary Materials

"Fiscal Policy in Europe: Controversies over Rules, Mutual Insurance, and Centralization," by Florin Bilbiie, Tommaso Monacelli and Roberto Perotti
We discuss the main fiscal policy issues in Europe, focusing on two that are at the core of the current debate. The first is that the government deficit and debt were, from the outset, the key objects of contention in the debate that led to the creation of the Eurozone, and they still are. The second issue is that a currency union implies the loss of a country-specific instrument, a national monetary policy. This puts a higher burden on fiscal policy as a tool to counteract shocks, a burden that might be even heavier now that the European Central Bank has arguably reached the Zero Lower Bound. Two obvious solutions are mutual insurance (or risk-sharing) amongst countries and a centralized stabilization policy. Yet both have been remarkably difficult to come by, especially due to political constraints. We review and discuss the relative merits of several proposals for increased insurance or centralization, or both. We conclude with an early discussion of the implications of the COVID-19 crisis for European fiscal policy reform and an assessment of the current fiscal measures.
Full-Text Access | Supplementary Materials

Symposium on Preventive Medicine
"An Ounce of Prevention," by Joseph P. Newhouse
I look at prevention through an economic lens and make three main points. First, those advocating preventive measures are often asked how much money a given measure saves. This question is misguided. Rather, preventive measures can be thought of as insurance, with a certain cost in the present that may or may not pay off in the future. In fact, although most medical preventive measures improve expected health, they do not save money. Various lifestyle and early childhood interventions, however, may both save money and improve health. Second, preventive measures, including medical and lifestyle measures, are heterogeneous in their value, both across measures and within measure, across individuals. As a result, generalizations in everyday discourse about the value of prevention can be overly broad. Third, health insurance coverage for medical preventive measures should generally be more extensive than coverage for the treatment of a medical condition, though full coverage of preventive services is not necessarily optimal.
Full-Text Access | Supplementary Materials

"Mammograms and Mortality: How Has the Evidence Evolved?" Amanda E. Kowalski
Decades of evidence reveal a complicated relationship between mammograms and mortality. Mammograms may detect deadly cancers early, but they may also lead to the diagnosis and potentially fatal treatment of cancers that would never progress to cause symptoms. I provide a brief history of the evidence on mammograms and mortality, focusing on evidence from clinical trials, and I discuss how this evidence informs mammography guidelines. I then explore the evolution of all-cause mortality relative to breast cancer mortality within an influential clinical trial. I conclude with some responses to the evolving evidence.
Full-Text Access | Supplementary Materials

Articles
"LGBTQ Economics," by M. V. Lee Badgett, Christopher S. Carpenter and Dario Sansone
Public attitudes and policies toward LGBTQ individuals have improved substantially in recent decades. Economists are actively shaping the discourse around these policies and contributing to our understanding of the economic lives of LGBTQ individuals. In this paper, we present the most up-to-date estimates of the size, location, demographic characteristics, and family structures of LGBTQ individuals in the United States. We describe an emerging literature on the effects of legal access to same-sex marriage on family and socioeconomic outcomes. We also summarize what is known about the size, direction, and sources of wage differentials related to variation in sexual orientation and gender identity. We conclude by describing a range of open questions in LGBTQ economics.
Full-Text Access | Supplementary Materials

"The Ways of Corruption in Infrastructure: Lessons from the Odebrecht Case," by Nicolás Campos, Eduardo Engel, Ronald D. Fischer and Alexander Galetovic
In 2016, the Brazilian construction firm Odebrecht was fined 2.6 billion USD by the US Department of Justice. It was the largest corruption case ever prosecuted under the US Foreign Corrupt Practices Act. Our examination of judicial documents and media reports on this case provides new insights on the workings of corruption in the infrastructure sector. Odebrecht paid bribes for two reasons: to tailor the terms of the auction in its favor, as well as to obtain favorable terms in contract renegotiations. In projects where Odebrecht paid bribes, costs increased by 70.8 percent on average, compared with 5.6 percent for projects with no bribes. We also find that bribes and profits made from bribing were smaller than documented in most previous studies, in the range of one to two percent of the cost of a project.
Full-Text Access | Supplementary Materials

"The Rise of Research Teams: Benefits and Costs in Economics," by Benjamin F. Jones
Economics research is increasingly performed in teams, and team-authored work has a large and increasing impact advantage. This article considers the benefits and costs of this "rise of teams." Among its benefits, teamwork allows individuals to aggregate knowledge in productive and novel ways. For example, as knowledge accumulates over time, individuals become narrower in their expertise, and teamwork is a natural organizational approach to aggregating expertise and maintaining one's reach. But teamwork also brings costs. For example, teamwork divides and obscures credit, which is central to the reward system of science. By clouding credit assignment, teamwork can undermine individual career progression and exacerbate issues of bias. In addressing the rise of teamwork, this paper further considers institutional innovations, especially those inspired by the hard sciences, that can help limit the costs teamwork imposes while realizing the benefits.
Full-Text Access | Supplementary Materials