The Case Against Reducing the Drinking Age

I'm predisposed to support reducing the legal drinking age from 21 to 18. If you're old enough to volunteer to fight in Afghanistan, seems as if you're old enough to drink. But in the Spring 2011 issue of the Journal of Economic Perspectives, Christopher Carpenter and Carlos Dobkin offer a careful reading of the evidence which leans the other way. Here's my personal summary of some main points:

Carpenter and Dobkin have a lovely figure, reproduced here, to illustrate the intuition behind a "regression discontinuity." Draw a best-fit line through the deaths for motor vehicle fatalities for those in the 18-21 age bracket, and you see that those accidents decline a bit as people move from age 18-21. Draw a best-fit line through the deaths from motor vehicle fatalities for people age 21-23, and again, you see that these accidents decline a bit a people mature. But put these two lines on the same graph, and you see a jump in motor-vehicle fatalities at age 21--when drinking becomes legal. A milder version of the same pattern appears in deaths from by suicide in these age groups, but the "jump" at age 21 is almost nonexistent in deaths from internal causes. Of course, this figure alone isn't conclusive, but it shows what is behind the more detailed statistical calculations in their research. 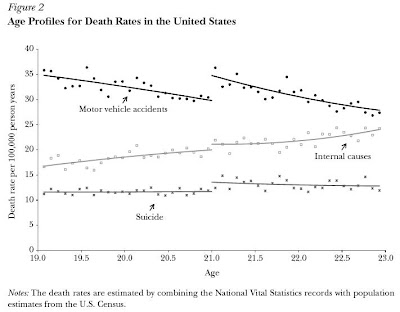 In short, the anecdotal stories about how if alcohol wasn't forbidden it would be used more sensibly may be true for some, but for the 18-21 age bracket as a whole, a lower drinking age would probably lead to more deaths, as well as consequences like injuries, crime, and higher-risk sexual behavior.

But that said, an economic calculation always needs to weigh costs against benefits. Many in the 18-21 age bracket would enjoy legal access to alcohol and would not end up as grim statistics. How can the benefits to this group be taken into account?

Carpenter and Dobkin suggest this approach. They work through a back-of-the-envelope calculation of the costs of drinking in terms of deaths and injuries, and what quantity of drinking would occur it the 18-21 age bracket if would occur if it were legal. They find that if those in the 18-21 age bracket were facing the actual expected average costs of their actions when they buy a drink, those costs would add $15 to the price of each drink for the costs that they themselves would experience, and another $2.63 per drink for the costs that they would inflict on others. In other words, if those in the 18-21 age bracket had to face the actual average costs of alcohol consumption at the time that they purchased a drink, most of them would decide against paying those costs.

Some inventive person can probably craft a clever plan that would try to combine legalizing alcohol for the 18-21 age group with some combination of education, rules, punishments, and rewards to encourage only responsible consumption. But the baseline for any such discussion should be that the Carpenter-Dobkin evidence that reducing the drinking age to 18 would impose large costs.