When I'm talking about underlying causes of the financial crisis, it's nice to have a vivid graph to display.

For example, I've often used graphs showing how certain key interest rates spiked during the crisis. Here's an example of such a graph from the the CBO's August 2009 The Budget and Economic Outlook: An Update (p. 35). 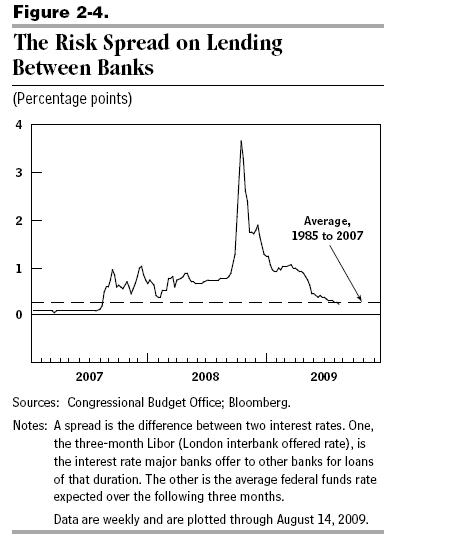 The graph shows the spread between the benchmark LIBOR interest rate and the federal funds rate
starts bubbling with the crisis in fall 2007, spikes in September 2008, then drifts down to near-common historical levels by spring 2009.The problem with this figure, of course, is that explaining it to an audience means needing to explain LIBOR, and the federal funds rate, and why a movement of a few percentage points is so important. If I wave my hands a lot, I can sell it. But I'm not sure the audience knows what it's buying.

So here is my new favorite graph for illustrating the financial crisis. It's a graph of net financial lending, taken from the CBO's January 2011 Budget and Economic Outlook: Fiscal Years 2011 to 2021 (p. 33). 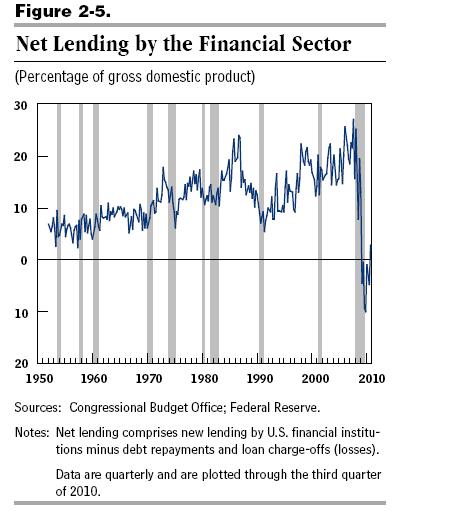 This graph needs a short explanation of what net lending is (that is, new lending minus repayments and charge-offs). But seeing a graph that goes up and down over the decades since 1950, but then turns violently negative the aftermath of the crisis, really helps to give a visceral sense of what a financial crisis means.

Posted by Timothy Taylor at 2:46 PM