How Did the Misery Index Become Irrelevant?

When unemployment and inflation both rose sharply during the "stagflation" of the 1970s, Arthur Okun came up with the "misery index," which is simply calculated by adding the unemployment rate and the inflation rate. (Okun was then at the Brookings Institution, and had previously been Chair of the Council of Economic Advisers at the tail end of the Johnson administration and a professor at Yale before that.) Okun certainly didn't view this little idea as any conceptual breakthrough, but it seemed a useful shorthand in his writing and speeches for characterizing some of what was happening in the 1970s. 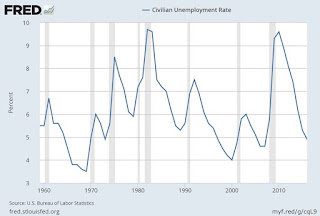 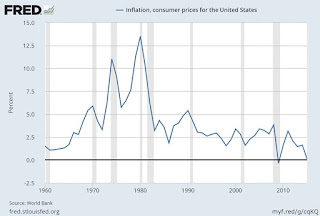 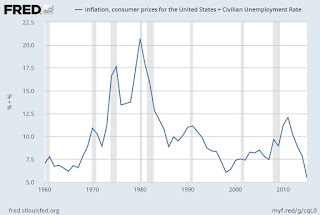 You can see the spikes in 1976 and 1980. But you can also see that the misery index--which was a major factor in the 1976 and 1980 presidential elections--is at historically low levels.  So why do so many people talk about the US economy in such near-apocalyptic terms? How did historically low rates of unemployment and inflation become seemingly irrelevant? I don't have a clear answer to this question, and indeed, the answer probably involves a cluster of factors.

It's not just party politics. One might expect Republicans running against a Democratic incumbent to do all they can to make economic performance sound grim, but Bernie Sanders and Hillary Clinton were willing to speak up about how they saw US economic performance as grim.

Maybe some of it is just ongoing shellshock from the Great Recession, but that recession did end back in June 2009.

Some of it is that the US economy has no recent experience with significant inflation in the last 25 years, so boasting that inflation is low in 2016 would have sounded peculiar.

Some of it is that when people vote in presidential elections, they seem to be influenced both by the rate of economic growth in the year leading up to the election and also by whether there have been some faster spurts of growth  during some quarters of the previous four years. But while the upswing from the end of the Great Recession in 2009 has been uninterrupted, it has also been characterized by relatively slow growth in productivity and output.

I think that a combination of slow growth and shifts in US labor markets are the main reasons why the misery index has become so irrelevant. A low unemployment rate doesn't feel like sufficient reason for satisfaction if the new jobs are mostly in the "alternative" workforce of contingent job arrangements, where there's no expectation of an ongoing relationship with an employer that can lead to building experience and knowledge and a career. When the economic pie is growing slowly and Americans are moving less, the high levels of inequality that have come to prevail become especially irritating.

Such changes are often traced to modern economic forces like how job patterns are altered by robots and new technology, or by globalization. I've got no magic recipe for a US economy with better growth and more career-type jobs, although at some point I'll try to put together a collection of some ideas that might help. But I'm quite confident that American economic progress won't be found in trying somehow to sidestep or ignore 21st century technology and trade and instead striving to re-create 1970s jobs at 1970s wages--back when the misery index mattered.
Posted by Timothy Taylor at 9:21 AM