The Evolution of Medicaid and Health Financing Reform

Much of the public attention over the Patient Protection and Affordable Care Act of 2010 has focused on the "exchanges" through which households can receive subsidies for purchasing health insurance. But the main way in which the legislation expanded health insurance coverage is through altering eligibility for the Medicaid program. The Kaiser Family Foundation provides some details on how Medicaid works and how it has has changed in a  "Medicaid Pocket Primer" (January 3, 2017). As the report notes:


"The Medicaid program covers more than 70 million Americans, or 1 in 5, including many with complex and costly needs for care. ...  Medicaid covers a broad array of health services and limits enrollee out-of-pocket costs. The program is also the principal source of long-term care coverage for Americans. ... The Medicaid program finances over 16% of all personal health care spending in the U.S. ..

Before the Affordable Care Act (ACA), most low-income adults did not qualify for Medicaid because income eligibility for parents was very limited in most states – well below the federal poverty level (FPL) in most states ($11,880 in 2016) – and federal law excluded adults without dependent children from the program. These rules left many poor and low-income adults uninsured. As part of the broader framework the ACA established to cover uninsured Americans, the law expanded Medicaid to nonelderly adults with income up to 138% FPL – $16,394 for an individual in 2016. The ACA provided federal funding for the vast majority of the cost of the Medicaid expansion. ...

Under a 2012 Supreme Court ruling, the ACA Medicaid expansion is effectively optional for states. As of January 2017, 32 states including DC had expanded Medicaid and 19 states had not. ... Between Summer 2013, just prior to the ACA coverage expansions, and October 2016, Medicaid and CHIP enrollment rose by nearly 17 million. In 2015, an estimated 11 million enrollees were adults newly eligible for Medicaid under the ACA expansion and this number has likely grown as enrollment has continued to rise and additional states have expanded Medicaid.

A few points are worth unpacking here. It's common in public discussions to refer to Medicaid as health insurance "for the poor," but that has never been quite correct. Adults without children have historically not been eligible for Medicaid, whether they were poor or not. Here are a couple of figures from the Kaiser report to illustrate the point. For example, the first bar shows that for the nonelderly below 100% of the federal poverty line, only 54% are covered by Medicaid, which as later bars show is breaks down into 76% of children and 40% of adults below the poverty line.

The expansion of Medicaid enrollments has of course led to an increase in spending in what was already a very large program. The Kaiser report notes: "Total federal and state Medicaid spending was about $532 billion in FY 2015. Medicaid is the third-largest domestic program in the federal budget, after Social Security and Medicare, accounting for 9% of federal domestic spending in FY 2015. Medicaid is the second-largest item in state budgets, after elementary and secondary education, accounting for 18.7% of state general revenue spending and 28.2% of total state general revenue spending including federal funds to states, in 2015."

The Congressional Budget Office estimated last March that the expanded Medicaid enrollments in the Patient Protection and Affordable Care Act cost $67 billion per year.  One contributing factor is that the cost per patient of Medicaid expansion is turning out to be about 50% higher on a per capita than the earlier estimates, coming in at just over $6,300 per person, according to estimates last August from the Centers for Medicare and Medicaid Services.

Medicaid costs have climbed substantially over time as a share of GDP, from less than 0.5% of GDP when the program got underway in the late 1960s to more than 3% of GDP at present. 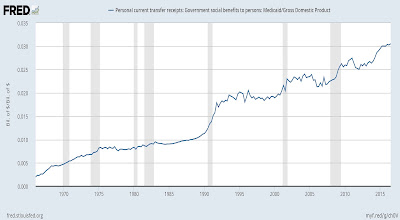 These patterns perhaps offer some useful context as the arguments over altering the Patient Protection and Affordable Care Act of 2010 gather momentum. As I've noted before, there's never been any secret that if the government was willing to spending tends of billions of dollars, it could expand health insurance coverage for millions of people.  Because I view the lack of health insurance coverage as a genuine problem, I'm fine with additional spending to expand Medicaid.

When President Obama addressed Congress about the pending health care legislation on September 9, 2009, he said: "So tonight, I return to speak to all of you about an issue that is central to that future -- and that is the issue of health care. I am not the first President to take up this cause, but I am determined to be the last." Even in September 2009, the notion that the US health care system could have a once-and-for-all fix was more of a rhetorical flourish than a practical reality. But given the form the actual legislation ended up taking, and given what has happened in the almost seven years since it was signed into law, the set of programs, regulations, and tax provisions affecting the US health care system clearly need some changes.