A Primer on the Jones Act and American Shipping

The Jones Act pops into public consciousness every few years, perhaps most recently in fall 2017 when President Trump suspended the law for 10 days to help hurricane assistance in Puerto Rico. Colin Grabow, Inu Manak, and Daniel Ikenson offer background on the law and make the case for its repeal in in "The Jones Act: A Burden America Can No Longer Bear" (Cato Institute Policy Analysis #845, June 28, 2018). They begin:


"For nearly 100 years, a federal law known as the Jones Act has restricted water transportation of cargo between U.S. ports to ships that are U.S.-owned, U.S.-crewed, U.S.-registered, and U.S.-built. Justified on national security grounds as a means to bolster the U.S. maritime industry, the unsurprising result of this law has been to impose significant costs on the U.S. economy while providing few of the promised benefits. ... While the law’s most direct consequence is to raise transportation costs, which are passed down through supply chains and ultimately reflected in higher retail prices, it generates enormous collateral damage through excessive wear and tear on the country’s infrastructure, time wasted in traffic congestion, and the accumulated health and environmental toll caused by unnecessary carbon emissions and hazardous material spills from trucks and trains. Meanwhile, closer scrutiny finds the law’s national security justification to be unmoored from modern military and technological realities."

Thus, the Jones Act made it illegal for any ships that were not "U.S.-owned, U.S.-crewed, U.S.-registered, and U.S.-built" to deliver goods to Puerto Rico after it was pounded by Hurricane Maria.

As a starting point, less competition means less pressure to seek out efficiency gains. After nearly a century of protection from foreign competition, costs of ship-building in the US are far above the international competition.

"American-built coastal and feeder ships cost between $190 and $250 million, whereas the cost to build a similar vessel in a foreign shipyard is about $30 million. Accordingly, U.S. shippers buy fewer ships, U.S. shipyards build fewer ships, and merchant mariners have fewer employment opportunities to serve as crew on those nonexistent ships. Meanwhile, facing exorbitant replacement costs, ship owners are compelled to squeeze as much life as possible out of their existing vessels.  ... The typical  economically useful life of a ship is 20 years. Yet three of every four U.S. container ships are more than 20 years old and 65 percent are more than 30 years old. ... These increasingly decrepit vessels are not only inefficient, but dangerous.... [Oil] tanker ships manufactured in the United States cost about four times more than their foreign-built counterparts ...

"Absent competitive forces, the U.S. shipbuilding industry has not felt compelled to evolve and similarly find its own competitive niche. Instead, it produces numerous types of vessels for which it possesses no particular advantages compared to foreign sources, and at a much higher cost. ... This mediocrity is further confirmed by the absence of foreign demand for U.S. ships. Exports from the sector, including repair services, accounted for a mere 4.6 percent of the industry’s revenue in 2014."

The cost of shipping between US ports, including both the cost of ships themselves and the other costs, are also far above international levels.


"The most obvious and direct effect of the Jones Act is on waterborne shipping rates. By limiting participation in the U.S. maritime and inland waterways transportation sector to U.S.-built, U.S.-owned, U.S.-flagged, and U.S.-crewed ships, the costs of moving cargo by water are artificially inflated. ...  To get a sense of the inefficiencies, a Maritime Administration report found that the operating costs of U.S.-flagged vessels engaged in foreign commerce in 2010 were 2.7 times greater than those of their foreign competitors. ...

"For reference, within the continental United States, moving crude oil from the Gulf Coast to the Northeast on a Jones Act tanker costs $5 to $6 per barrel, but only $2 per barrel when it is shipped from the Gulf Coast to Eastern Canada on a foreign-flagged vessel. ... The Jones Act also explains the seemingly curious sourcing decisions for other commodities, such as rock salt. Maryland and Virginia, for example, obtain the product for wintertime use from distant Chile instead of domestically, despite the United States being the world’s largest producer of that commodity."

With limited domestic demand for new ships, either from domestic or foreign sources, because of the high costs of ships and shipping, the US shipbuilding industry has over time become tiny compared to its international competitors. Indeed, US ship-building has become heavily reliant on the defense purchase: "Nearly two-thirds (98 of 150) of new large, deep-draft vessel orders in 2014 came from the military, which accounted for 70 percent of the shipbuilding and ship-repairing industries’ revenues in 2014 and 2015. ...


"In 2015 the Maritime Administration listed the number of active shipyards at 124 but also pointed out that, of those, only 22 are `mid-sized to large shipyards capable of building naval ships and submarines, oceangoing cargo ships, drilling rigs and high-value, high-complexity mid-sized vessels.' This pales in comparison to shipyards in Asia. Japan, for instance, currently has more than 1,000 shipyards, and it is estimated that China has more than 2,000. There are also only 7 active major shipbuilding yards in the United States, as compared to roughly 60 major shipyards in Europe (major shipyards are defined as those producing ships longer than 150 meters). Table 1 presents the top 10 countries for the total number of ships built in gross tons during 2014–2016. At under 1 million gross tons, U.S. shipbuilders’ output was less than 1 percent of China’s and Korea’s shipbuilders." 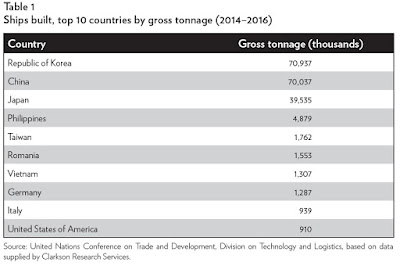 Also, with high costs of ships and shipping, the amount of freight that travels by water is low in the US, and declining, while in other places is it much higher and rising.


"Although 38 states and the District of Columbia are connected by navigable waterways and marine highways, and nearly 40 percent of the U.S. population lives in coastal counties, coastal shipping of cargo between U.S. ports in the Lower 48 states  comprises a negligible 2 percent of domestic freight.  ... In the European Union, where cabotage among the member states is permitted, the corresponding figure is 40 percent. In Australia, where vessels need not be built domestically to participate in cabotage services, coastal shipping accounts for 15 percent of domestic freight. Meanwhile, after relaxing its cabotage restrictions in 1994, New Zealand experienced a decrease of approximately 20–25 percent in coastal freight rates over the subsequent six years."

Unsurprisingly, the high cost of shipping by water means that in the US, freight is instead shipped overland . Consider, for example, all the trucks and trains that run up and down the east coast or the west coast.

"[I]n the continental United States, businesses have alternatives to waterborne transportation. And the data show that the amount of U.S. cargo shipped along the Atlantic coast, Pacific coast, and Great Lakes today is about half the volume of the cargo shipped that way in 1960, despite the economy’s considerable growth in the intervening years. Over the same period, railroads have increased their transport volume by about 50 percent and intercity trucks have increased their freight by more than 200 percent. To confirm that waterborne shipping at market rates didn’t lose its appeal, river barges and coastal ships linking the United States with Canada and Mexico experienced growth in their freight tonnage of more than 300 percent over the same period. ... While the Jones Act reduced the supply of ships and drove up the costs of waterborne shipping, it increased demand for road transport, presumably driving up the prices of trucking and rail. ...

"[A]ccording to the Congressional Research Service, “some of the most congested truck routes, such as Interstate 95 in the East and Interstate 5 in the West, run parallel to coastal shipping routes, and water shipment through the Saint Lawrence Seaway and the Great Lakes has the potential to relieve pressure on major east–west highways, pipelines, and railroads in the Midwest.”"

This shift away from water-based transportation to overland road and rail has a variety of costs, like greater congestion and wear-and-tear on the roads. It also has environmental costs like higher carbon emissions:


"According to the World Shipping Council, maritime shipping `is the world’s most carbon-efficient form of transporting goods—far more efficient than road or air transport.' Maritime shipping produces approximately 10–40 grams of carbon dioxide to carry one ton of cargo one kilometer. In contrast, rail transport produces 20–150 grams, and trucking—whose tonnage is forecast to grow 44 percent by 2045 according to the Department of Transportation—produces  60–150 grams. "

The argument a century ago, and since, has been that a domestic ship-building industry is essential for national defense. Maybe so! But if that is the goal, the Jones Act is sorely failing to accomplish it. Instead, the Navy can't afford the extra ships it wants, the number of available US civilian ships and the knowledgeable workers to run them is shrinking, and military operations have had to find ways to make use of foreign ships. Some anecdotes drive home the point:

"When U.S. forces were deployed to Saudi Arabia during Operations Desert Shield and Desert Storm, a much larger share of their equipment and supplies was carried by foreign-flagged vessels (26.6 percent) than U.S.-flagged commercial vessels (12.7 percent). Only one U.S.-flagged ship was Jones Act compliant. In fact, the shipping situation was so desperate that on two occasions the United States requested transport ships from the Soviet Union and was rejected both times. ... At the time, Vice Admiral Paul Butcher, who was then deputy commander of the U.S. Transportation Command, remarked that without the availability of foreign-flag sealift, `It would have taken us three more months to complete the sealift ourselves.' ...

"Of the 46 ships comprising the Maritime Administration’s Ready Reserve Force—a fleet that helps transport combat equipment and supplies `during the critical surge period before commercial ships can be marshaled'—30 are foreign-built. Although worthy to serve in the country’s defense, these same ships are ineligible to engage in coastwise trade."

As a general rule, it is unlikely that the solution for a problem is identical to the cause of the problem. But after nearly a century of protection from international competition sheltered  US ship-building and shipping to compete with foreign competition and thus led it into near-obsolescence, the reason for keeping the Jones Act in place seems to be that, without it, the US shipping and ship-building industry would have a hard time competing. It's a little like arguing that the cure for a drug addition is a continuing supply of the drug to which you are addicted.

I'm willing to have a discussion about what policy steps might be useful in creating a US ship-building and shipping industry that is internationally competitive. The necessary steps might be dramatic and costly. But the first step in that discussion is the acknowledgement that the long-run effects of the Jones Act have been terrible and counterproductive policy for the US shipbuilding and shipping industries. It has rendered those industries essentially unable to compete on the world stage, while creating costs throughout the rest of the US economy and reducing US military security. Any plan for US shipbuilding and shipping which doesn't focus on how to bring the Jones Act to an end is not serious.