Reskilling over a Lifetime

The usual pattern of spending on skill development during a lifetime of an American looks like this: 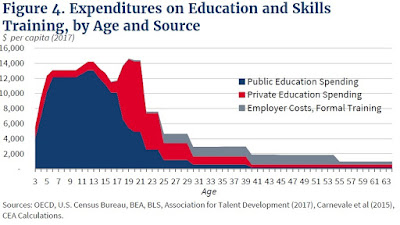 The figure is from a report by the White House Council of Economic Advisers, titled "Addressing America’s Reskilling Challenge" (July 2018). The blue area shows public education spending, which is high during K-12 years, but the average spending per person drops off during college years. After all, many people don't attend college, and of those who do many don't attend a public college. Private education spending shown by the red area takes off during college years, and then trails off through the 20s and 30s of an average person. By about age 40, public and private spending on education and skills training is very low. Spending on formal training by employers, shown by the gray area, does continue through most of the work-life.

The figure focuses on explicit spending, not on informal learning on the job As the report notes: "Some estimates suggest that the value of these informal training opportunities is more than twice that of formal training." Nonetheless, it is striking that the spending on skills and human capital is so front-loaded in life. The report cites estimates that over a working lifetime from ages 25-64, the average employer spending per person on formal training totals about $40,000.

The report mentions an array of programs to address mid-life reskilling and lifelong-efforts by nonprofits, by certain states, by some unions, and government programs like Trade Adjustment Assistance. It also mentions gives examples from programs in Sweden, Germany, Canada, South Korea. For example, here's a taste of what happens in Germany:


"Germany has a model for promoting reemployment that privatizes public job placement services. In 2002, the German government introduced a “voucher” system. The system provides compensation to private job placement services that successfully find employment for displaced workers. All workers unemployed for three months or longer are eligible for the program, and the payment rate for successful placement increases with the duration of unemployment.

"In the German program, individuals sign placement contracts with private agencies. If the agency finds the worker a job and an employment contract is signed, the agency can redeem the public voucher. Voucher payments are conditional on worker tenure in the new employment arrangement, and if the employment relationship lasts fewer than three months, the voucher payment must be refunded. Vouchers are more likely to be utilized by younger workers with higher skill levels and, overall, private job placement services were tapped by only 2 percent of job seekers once the program was fully implemented. ...

"In addition to the job placement voucher, Germany also utilizes a job training voucher system (Tergeist and Grubb 2006; Besharov and Call 2016). The purpose of this voucher is to provide individuals with the opportunity to choose which training program to participate in. However, eligible training programs must have a proven track record, usually a 70 percent success rate in placing individuals out of unemployment within six months after the end of the program. Strittmatter (2016) found that these training programs tend to have negative employment outcomes in the immediate term as individuals focus on their training and reduce time spent searching for a job. This negative effect can last for up to two years, likely due to the long duration of these vocational programs. But after four years, the voucher system exhibits clear gains: unemployed individuals who utilize the vocational training voucher experience a two percentage point increase in their employment probability when compared to individuals who did not participate such a training program."

The CEA notes a point I've tried to make on this blog a few times over the years. Labor market policies can be "passive," like paying benefits to the unemployed, or "active," like assisting with job search and retraining. The US has traditionally spent far less on active labor market policies than other high-income countries (for more discussion, see here and here): 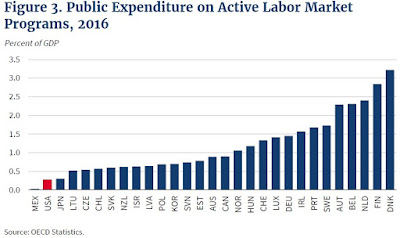 In a US economy where jobs and the skills needed to fill them are continually evolving, and where some of the necessary shifts can be wrenching and large, there is a case for thinking more systematically about job training throughout life. Individuals who need retraining face some practical problems: an information problem of what kind of training employers really want; an availability problem of how and where to get that training, and a financial problem of how to pay for it. Many employers do not necessarily view themselves as primarily in the training business. They want employees who are plug-and-play, ready to contribute on the first day. And employers worry that in an economy where employees shift between jobs, any efforts they make to train workers will only end up benefiting workers at their next employer. But programs for lifelong learning need input and support from employers, because ultimately employers are the ones who know what skills they want.

Moreover, the issue here is not just about helping those who are unemployed or between jobs. It's also about those who would prefer to add skills now, in the hope of gaining job security or getting a promotion from a current employer. Lifelong learning doesn't just happen during spells of unemployment.

I do not have a well-defined proposal to offer here. In political terms, it's interesting to see the White House economists raising these issues. But the Trump administration does not seem to be one where the economists have an especially loud voice in making policy.
Posted by Timothy Taylor at 10:00 AM