The pervasiveness of US religious belief has seemed to decline in the last 30 years or so, by a variety of measures. Daniel Hungerman investigates "Religious Institutions and Economic Wellbeing" in the most recent issue of Future of Children (Spring 2020, pp. 9-28). As a starting point, here's a figures from Hungerman showing the fall in US religious belief over time (using data from the General Social Survey). 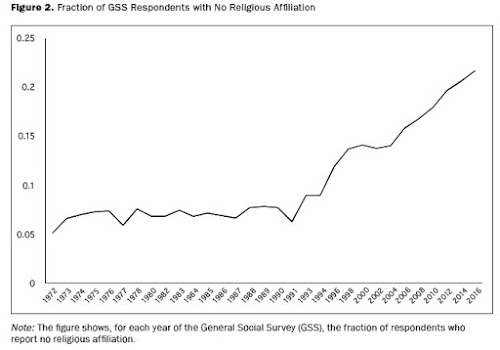 The decline in religiosity seems likely to continue, because the shift is especially large among younger age groups. 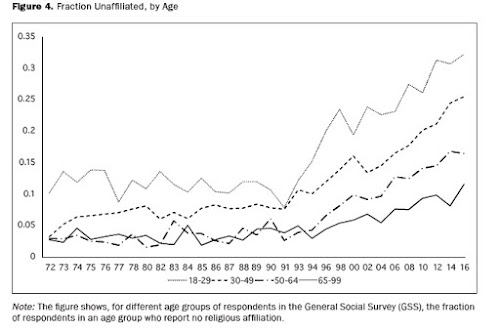 Or here's a figure showing that the share of charitable giving going to religious organizations was about half back in the 1980s, but it now down to about 30%. 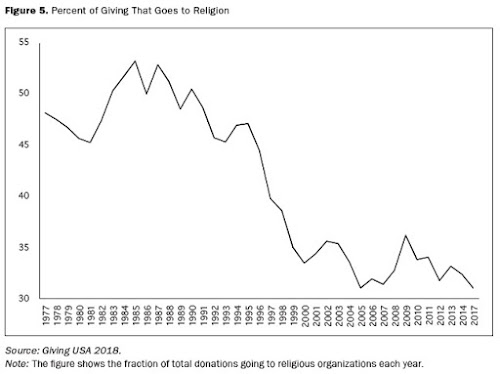 Why this shift started happening around 1990s isn't altogether clear. The sex scandals afflicting the Catholic Church, for example, are not especially prominent in the broad public eye until the early 2000s. There's some nondefinitive evidence that increasing levels of education may tend to reduce religious belief. There's also a sense that in  many people's minds, religion has become more entangled in politics, which has led some people to react by drawing back from religious belief.
But Hungerman's main focus is about the effects of this change. It's well-known that religious people often typically report being happier, and are more likely to vote, less likely to use drugs or commit crimes, and so on. But correlation isn't causation. Ideally, one might want to do an experiment where some people randomly become committed to religion while an otherwise identical comparison group does not do so, but this particular experiment seems impractical. Indeed, it seems plausible that those who choose to participate in religion may differ in some underlying way from those who do not. So how can a researcher try to find evidence, one way or another, of causal effects?
I'll just say up front that there's no perfect way to find a pure causal effect from religion to economic outcomes. Instead, like a lot of social science issues, one instead tries to tackle the question from a variety of angles in specific research studies, and then see what overall pattern starts to emerge. Thus, the array of examples also gives a sense of how the minds of social scientists work. For example, here are some of the examples and approaches discussed by Hungerman:

Dehejia, DeLeire, and Luttmer examine whether religious individuals’ consumption and self-reported wellbeing appear to be relatively less sensitive to income shocks—that is, whether religion helps “insure” people against negative shocks. ... [T]he authors use a variety of methods, such as applying a procedure that matches each religious person in a sample to an observationally similar nonreligious person, so that the final data sample contains a similar distribution of observable characteristics across religious and nonreligious individuals. They find that religiosity does indeed insure against negative shocks.

Looking at whether more of your neighbors share your religious tradition

Gruber proposes a creative strategy: using variation in the ethnic composition of one’s community to study the impact of religion. Put simply, an American of Italian ancestry may not make much of a distinction between living in a neighborhood full of Swedish individuals versus a neighborhood full of Polish individuals—except that the latter group, like Italians, are Catholic. If living side-by-side with ethnicities that share your religious tradition makes you more religious, but otherwise doesn’t affect your wellbeing, than we can use ethnic composition to learn about the causal effects of religion.
Gruber finds, again, that religiosity leads to better outcomes for a number of economic indicators.

Especially noteworthy is a study by the economists Jane Fruehwirth, Sriya Iyer, and Anwen Zhang. In an approach similar to Gruber’s, they exploit variation in the religiosity of peers across cohorts within a school to identify how religion influences mental health in a sample of US adolescents. They find that religion plays an important causal role in promoting mental health.

A lottery for attending the Haj

David Clingingsmith, Asim Khwaja, and Michael Kremer. They look at the effects of attending the Hajj—the pilgrimage to Mecca that Muslims are expected to make at least once during their lifetime. To study how attending the Hajj affects people’s values, Clingingsmith, Khwaja, and Kremer use a Pakistani lottery that allocates Hajj visas; they find that participation in the Hajj leads to greater acceptance of female education and employment. More generally, Hajj lottery winners show both increased Islamic observance and greater belief in equality and harmony among all religions.

The great social scientist Max Weber famously considered whether a Protestant ethic for work might drive the difference between economic wellbeing in Protestant and Catholic communities. Becker and Woessmann take up this association in several steps. First, they put it to a careful test in historic Prussia, exploiting the fact that Protestantism expanded from its birthplace in Wittenberg (a previously unimportant town) in a pattern akin to concentric circles. Moving away from Wittenberg, you encounter all sorts of terrain and all types of communities—but places farther from Wittenberg are less likely to be Protestant, all else equal. Becker and Woessmann then confirm that distance from Wittenberg appears unrelated to various controls (such as the presence of schools in the 1500s, before the reformation), but centuries later it does predict income and economic circumstance—being closer to Wittenberg (and therefore more Protestant) is better for economic wellbeing. This suggests that the link between GDP and Protestant affiliation is more than a simple association. Does this mean Weber was right? Not quite. The final step of Becker and Woessmann’s study shows that variation in literacy can largely explain the economic gains of Protestantism. It appears that the Protestant emphasis that everyone should be able to read the Bible (and thus be able to read), rather than a “noncognitive” work ethic, can explain why Protestant societies had higher economic productivity.

Interaction of religion with laws about alcohol and gambling

Looking at the United States, Jonathan Gruber and I investigated this by looking at the repeal of “blue laws” that restrict economic activity on a certain day of the week (often Sunday).40 Most recent blue laws are narrow in focus—for example, alcohol can’t be sold at grocery stores before noon on Sundays. But not that long ago, many states had strong blue laws that prohibited most Sunday economic activity. A Supreme Court ruling in 1961 provided a test by which these laws could be repealed, and many were consequently undone. Gruber and I show that when such laws are undone, religiosity declines, and that risky behavior such as heavy drinking increases— but the increases are driven by those who report having been religious before the repeal occurred.  ... Religious rules appear to be effective in discouraging heavy drinking and gambling. The results [from another study] often indicate that the most religious individuals are those who are likeliest to substitute: it’s the most religious groups whose religious giving declines when casinos open or when commerce is allowed on Sundays, and it’s the most religious individuals who are likely to start drinking heavily when the legal drinking age changes.

Figuring out causal connections from religion to life and economic outcomes is a challenging research project. But the weight of the evidence Hungerman discusses--only a bit of which I've mentioned here--is that those who end up being exposed to religion do seem to experience measurable benefits, which in a broad sense take the form of bolstering a person's confidence and determination in following a path of learning, saving, and work--and avoiding being derailed by overindulgence in counterproductive habits.
I'll also append here the full Table of Contents for this issue of Future of Children. It seems to have an even higher-than-usual proportion of interesting essays, and I may post some additional commentary about other essays in the next week or so. 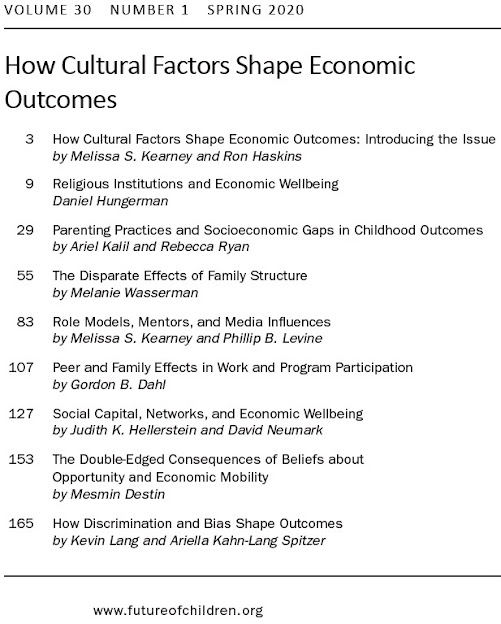