Some Background about Police Shootings

The Annals of the American Academy of Political and Social Science devoted its January 2020 issue to a set of 14 articles on the theme of   "Fatal Police Shootings: Patterns, Policy, and Prevention." I'll post a Table of Contents for the issue below. Here, I'll just note some of the lessons one might take away from a few of the papers in the issue.

Police shoot and kill about a thousand civilians each year, and other types of conflict and custodial force add more than one hundred other lives lost to the annual total death toll. This is a death toll far in excess of any other fully developed nation, and the existing empirical evidence suggests that at least half and perhaps as many as 80 percent of these killings are not necessary to safeguard police or protect other citizens from life-threatening force. ...

One reason why U.S. police kill so many civilians is that U.S. police themselves are vastly more likely than police in other rich nations to die from violent civilian attacks. In Great Britain or Germany, the number of police deaths from civilian attack most years is either one or zero. In the United States—four or five times larger—the death toll from civilian assaults is fifty times larger. And the reason for the larger danger to police is the proliferation of concealable handguns throughout the social spectrum. When police officers die from assault in Germany or England, the cause is usually a firearm, but firearms ownership is low, and concealed firearms are rare. There are, however, at least 60 million concealable handguns in the United States and the firearm is the cause of an officer’s death in 97.5 percent of intentional fatal assaults, an effective monopoly of life-threatening force even though more than 95 percent of all assaults against police and an even higher fraction of those said to cause injury are not gun related. ...

A theme that runs loosely through a number of these essays is that police-citizen interactions can involve "tight coupling," which is organizational behavior jargon for an interrelated system with lots of stresses and little slack. A "tightly coupled" system is bad at dealing with unexpected shocks, which can cause catastrophic breakdowns. A situation where a police officer is feeling threatened and stress, and as if there is a need for immediate urgent action, is also a situation where racial prejudices about who poses a danger and what actions are justified in response more easily boil to the surface.
An implication of this insight is that focusing just on the situations where a breakdown (in this case, a policy shooting) occurs runs a risk of missing the point, which is that the system is fragile and prone to failure. Thus,  Zimring points out both that criminal prosecutions in cases of police shooting are extremely low--indeed, so low as to raise concerns that justice is not being done in many cases--but also to argue that while responding after-the-fact with prosecutions of police who kill someone can be a useful step in some cases, it misses the broader point. He writes:

One important problem in the governmental control of unnecessary police use of deadly force is the fact that police officers have been operating with near impunity when efforts are made by citizens or law enforcement to prosecute police officers for criminal misuse of their lethal weapons. The thousand or so killings of civilians by police officers in the United States each year have in recent history produced about one felony conviction of a uniformed officer per year. According to research by Philip Stinson of Bowling Green University, there were in the years 2000 to 2014 an average of 4.4 cases per year in the United States where police killings resulted in murder or manslaughter charges against one or more officers, and the prospects for obtaining felony conviction in these cases were low. The odds of a death producing a felony conviction were close to one in one thousand. ...

If the high death rates generated by police activity in the United States were for the most part the result of blameworthy activity by a few bad cops, then criminal law would make sense as a primary control strategy. But the problems are a mix of ineffective administrative controls, vague regulations, and the absence of administrative policy analyses and incentives for reducing death rates. It is hard to pin 100 percent of the blame for this mess on one or two officers. ... The critical problem with reform priorities in the first years after Ferguson, Missouri, was the exclusive emphasis on criminal prosecutions and criminal prosecutors. Ineffective police administrators—and the vague and permissive nonspecificity of their deadly force standards—have been unjustly spared in the reexamination of why the epidemic of civilian deaths is a chronic part of our national experience.

So what is to be done to adjust the system of policing. There are a number of There are a number of proposals for improving police performance across-the-board, including a hoped-for reduction in the number of shootings. But the evidence in support of the efficacy of these steps is somewhere between weak and nonexistent. Robin S. Engel, Hannah D. McManus, Gabrielle T. Isaza write: "Of the litany of recommendations believed to reduce police shootings, five have garnered widespread support: body-worn cameras, de-escalation training, implicit bias training, early intervention systems, and civilian oversight. These highly endorsed interventions, however, are not supported by a strong body of empirical evidence that demonstrates their effectiveness."
They review the partial and limited evidence on these policies. They point out that when it comes to public policy, it isn't always possible or desirable to wait for years of study to be sure that something works. As the social scientists say, absence of evidence is not evidence of absence. Instead, jurisdictions that are trying these policies should also be trying to couple new policies with rigorous evaluation. They describe the experience of the University of Cincinnati Department of Public Safety, which works closely with the Cincinnati police:

This is the approach we used to facilitate the reform efforts within the UCPD. Our first step was to redesign data collection systems to include the data necessary to evaluate the impact of our work. Our executive team modified existing data collection processes and also mandated the collection of new data. Changes in data collection instruments and practices resulted in new data generated during traffic and pedestrian stops, during the citizen complaint process, through the review and cataloging of BWC footage, during potential use-of-force encounters (e.g., when officers draw their Tasers or firearms but do not deploy them), along with multiple citizen and officer surveys. Each of these data collection changes required an accompanying change in policy, training, and supervisory oversight to ensure that the data were being properly collected and used. The UCPD is now in a better position to test specific propositions about the effectiveness of our own reform efforts.

What other factors might matter? Greg Ridgeway writes in his essay:

Using data from the New York City Police Department (NYPD) and the Major Cities’ Chiefs Association (MCCA), the analysis finds that police officers who join the NYPD later in their careers have a lower shooting risk: for each additional year of their recruitment age, the odds of being shooters declines by 10 percent. Both officer race and prior problem behavior (e.g., losing a firearm, crashing a department vehicle) predict up to three times greater odds of shooting, yet officers who made numerous misdemeanor arrests were four times less likely to shoot.

When President Obama asked my White House Task Force cochair, Chuck Ramsey, and me if there was one area we would have delved into if given more time, we said that area was recruitment. American policing in the future will be shaped by the men and women now coming into the police academies, yet at a time when there are calls for advancing a “guardian” culture in policing, many training academies are still organized as military-style boot camps emphasizing a “warrior” approach ......

Robinson also notes that there have been lots of changes in use-of-force policies in major police departments. As she writes:

Larger police agencies are, in fact, taking steps to revise their use of force policies, and it is having an impact. According to a survey of forty-seven of the largest law enforcement agencies in the United States from 2015 to 2017 conducted by the Major Cities Chiefs Association (MCCA) and the National Police Foundation, 39 percent of the departments changed their use of force policies and revised their training to incorporate de-escalation and beef up scenario-based training approaches. Significantly, officer-involved shootings during this period dropped by 21 percent in the agencies surveyed ...

The editor of the volume, Lawrence W. Sherman, suggests in an essay near the close of the volume that there are three proposals "that seem to have the greatest chance of winning a political consensus, and then winning implementation." He writes:

But ultimately, a fundamental problem is that there are something like 18,000 police departments across the United States, and when a police shooting occurs, the US system of government often assumes that the same local law enforcement mechanisms that include the police in a central role will also be able to investigate the police. It's not a surprise that this often doesn't work well. In some cases, the state steps in, but as Zimring points out: "The unit of government that maintains authority in many other criminal justice operations—the state level—usually has no concern with and little statutory authority about policing."
Thus, Zimring suggests that there could be a national-level Office of Police Conduct, which can serve as a clearinghouse for complaints, reports, and information He writes:

There is also one important foreign model of a national fact-gathering institution that could also be incorporated into the U.S. government’s Department of Justice, perhaps in the civil rights division. Police departments in England and Wales have decentralized administrations, not unlike the United States. But the United Kingdom also created an Independent Office for Police Conduct (formerly known as the Independent Police Complaints Commission) that has become a statistical and analysis resource that is worthy of emulation on this side of the Atlantic ... 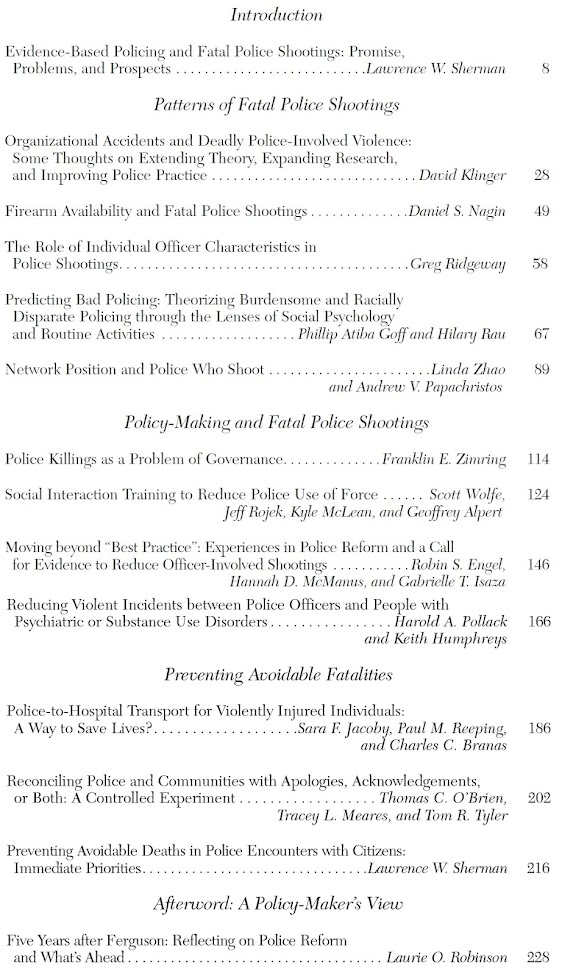 Posted by Timothy Taylor at 3:12 PM