Prime-Age Males Not in the Labor Force: Some Patterns 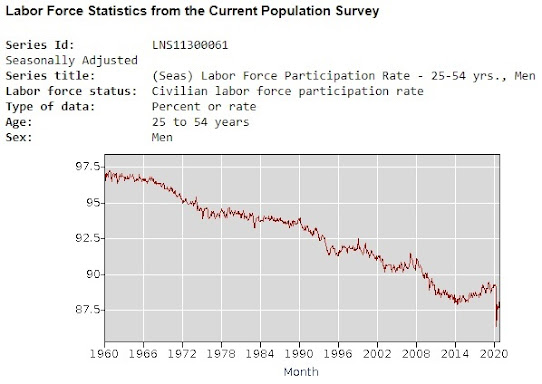 Why are prime-age men more likely to be out of the labor force? Notice that the shift has been happening for more than a half-century, so one either needs a big-picture explanation that applies over this entire time period or a series of short-run explanations that all happen to be running in the same direction.  Donna S. Rothstein of the US Bureau of Labor Statistics provides an overview of the arguments along with some new evidence in "Male prime-age nonworkers: evidence from the NLSY97" (Monthly Labor Review, December 2020). Here is her rapid-fire overview of some of the recent research seeking explanations for the decline (footnotes with citations omitted here, but available at the link).

Several recent studies document and try to explain the decline in labor force participation of prime-age men over time. In a 2017 study, for example, Alan B. Krueger finds that health conditions, disability, and the rise of opioid prescriptions may be important contributing factors. In another 2017 study, John Coglianese suggests that much of the decline in prime-age men’s labor force participation is due to the increase of “in-and-outs”—that is, men who temporarily leave the labor force between jobs. He credits the rise in this phenomenon to the increase in young men living with parents and to a wealth effect from married or cohabiting men’s partner’s growth in earnings. Mark Aguiar et al. posit that more recent declines in the labor supply of young men are due to the advancement of video game technology. In a series of studies, David H. Autor et al. argue that the pain of more recent trade shocks is often locally concentrated, causing a decline in manufacturing employment in those local areas, which particularly affects those with lower levels of education. Katharine G. Abraham and Melissa S. Kearney provide an extensive review of the literature on the decline in employment over time and evaluate which factors they believe are most important for the decline from 1996 to 2016. They posit that factors associated with labor demand, primarily related to trade and automation, are the most responsible for the decline over this period. Labor supply factors related to disability caseloads and compensation (Social Security Disability Insurance and the U.S. Department of Veterans Affairs disability compensation program), the real value of the minimum wage, and the rise in incarceration and the growth in the number of people with prison records also had an impact. Ariel J. Binder and John Bound point out that declining labor force participation rates are more pronounced among prime-age men who are less educated. They argue that feedback between labor demand, marriage markets, and the increase in men living with parents or other relatives plays a role in declining labor force participation rates of prime-aged men with less than a college education. Jay Stewart provides descriptive statistics of male nonworkers and their sources of financial support. He uses the National Longitudinal Survey of Youth 1979 (NLSY79) to look at work behavior from 1987 to 1997 and finds that a small fraction of men account for the majority of person-years spent not working. Using data from the CPS, Stewart finds that a substantial proportion of nonworkers live with family members and receive financial support from those members.

The Binder-Bound paper she mentions was published in the Spring 2019 of the Journal of Economic Perspectives, where I work as Managing Editor, as part of a three-paper symposium.
Rothstein offers some new evidence by looking at data from the National Longitudinal Survey of Youth, which tracks people over time. In particular, this survey started interviewing people in 1997 who had been born between 1980 and 1984. This allows Rothstein to focus on the experiences of men who were in the 30-34 age group in 2015 and who were out of the labor force.  Some of the most common patterns are that earlier life experiences are correlated with being out of the labor force as an adult:

Men who are out of the labor force tend to have lower skills. They are much less likely to be married and  more likely to be living with their parents. They are more likely to  have been incarcerated. Compared to men in the labor force, they spend more time watching television and less time on a computer: "Regarding time use in a typical week, men who did not work in the prior year were more likely than those who worked to watch at least 21 hours of television per week (23.7 percent versus 9.6 percent), and nonworking men were less likely than working men to spend 10 or more hours on the computer (30.1 percent versus 58.6 percent)."
The patterns described here are entangled: for example, the neighborhoods and families where people grow up affect their future education level, health, and future family patterns. The result is a growing number of prime-age men--roughly one in eight in this age group for the nation as a whole--who have ended up separated from workforce. Many of the prime-age men who were out of the labor force in 2015 had also been out in previous years. "The ... vast majority of men who did not work in the year prior to the 2015–16 interview also did not work in earlier years. For example, 79.3 percent did not work in the second year before the interview, 64.7 percent did not work in the third year before the interview, and 61.2 percent did not work in the fourth year before the interview. More than half (56.4 percent) did not work in the 4 years before the 2015–16 interview."
Work is of course much more than a paycheck. As the poet Marge Piercy put it, work is "to be of use."
Posted by Timothy Taylor at 10:00 AM