What Should Be Included in Income Inequality?

Like many other concepts in economics, "income" is an idea that is only simple if you don't think about it too much. Moreover, one's measure of the inequality of income will depend to some extent on the measure of income that is chosen.

As one either digs into these questions (or is slowly dragged into the swamp of these questions, depending on one's perspective), you are forced to face an overall question: In a very big-picture economic sense, what is produce in an economy in a given year as measured by gross domestic product is equal to the total income received in a year by parties throughout the economy. But when we measure inequality of "income"--even when we use a broad measure that includes taxes and the value of government transfers--it represents only a part of the economy.

For example, if we start counting noncash government benefits as income, what about noncash benefits received by workers, like the value of employer-provided health insurance, employer-provided contributions to a pension or a retirement account, or an employer-provided life insurance plan. Economists point out that if you live in a house you own, you are--in effect--renting that house to yourself, and one could in principle count the "imputed income" you receive from yourself as part of your personal income, just like any other landlord is required to count rental income. After all, living rent-free because you own a house is a form of the capital income that you receive from home ownership. Or what about business owners who receive a benefit both from the annual salary they receive, but also from reinvesting company profits in a way that leads to a rising value of their business?

With all of these ideas in mind, economists have been trying to develop "distributional national accounts," which try to figure out what income inequality would look like with everything included. Two leaders in this effort are Emmanuel Saez and Gabriel Zucman, and they lay out the state of play in this effort "The Rise of Income and Wealth Inequality in America: Evidence from Distributional Macroeconomic Accounts" (Journal of Economic Perspectives, Fall 2020, 34:4, pp 3-26). Saez and Zucman have been leaders in using tax data to estimate income inequality (instead of using data from household surveys), but they are now focusing more on forms of income that the tax data leaves out. They write:

On the labor side, untaxed labor income includes tax-exempt employment benefits (contributions made by employers to pension plans and to private health insurance), employer payroll taxes, the labor income of non-filers, and unreported labor income due to tax evasion. The fraction of labor income which is taxable has declined from 80 to 85 percent in the post-World War II decades to just under 70 percent in 2018, due to the rise of employment fringe benefits—in particular the rise of employer contributions for health insurance, particularly expensive in the United States. Most studies of wage inequality ignore fringe benefits even though they are a large and growing fraction of labor costs. As for capital, only one-third of total capital income is reported on tax returns. Untaxed capital income includes undistributed corporate profits, the imputed rents of homeowners, capital income paid to pension accounts, and dividends and interest retained in trusts, estates, and fiduciaries.

Thinking about how to allocate all of these forms of income to specific individuals, and then to form an income distribution based on the results, is an enormous task. It necessarily involves a lot of judgement calls, which are discussed in some detail in the paper. But here's an example of one of their results. This figure shows the average tax rate paid by different parts of the US income distribution at different times--where "income" here is broadly defined to include everything, not just what people see on a pay stub or report on their taxes, and taxes include all taxes at the federal, state, and local level. 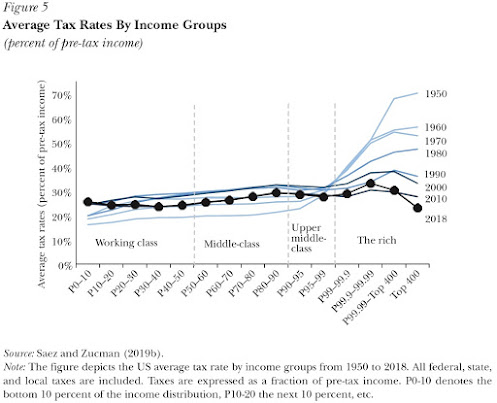 Several patterns from this figure are especially striking. First, for most of the income distribution in most of these years, the tax burden looks relatively flat--that is, once you combine federal income rates (where those with high incomes pay a higher share of income) with all the other taxes and forms of income, the share of income paid in taxes rises a bit with income, but not a lot. Second, if you look at the far right-hand-side of the figure, focused on the upper 1% and smaller slices of the top 1%, the average tax rate paid looks to have declined sharply. The basic story here is that back in the 1950s,  corporate tax rates, capital gains tax rates, and the top marginal income tax rates were all higher. Now, those with very high income levels have figured out ways for that income to come in the form of capital gains, so that the tax rate is relatively low and taxes can be deferred until the capital gain is realized.

But as I mentioned a moment ago, it takes a lot of assumptions to develop this data, and others have argued that the Saez-Zucman assumptions are in various ways biased toward showing greater inequality than in fact exists. Wojciech Kopczuk and Eric Zwick present some of the counterarguments in "Business Incomes at the Top" (Journal of Economic Perspectives, Fall 2020, pp 27-51). They focus in part on the distinction between wage inequality and business inequality.

As a vivid example, think for a moment about some of the employer-paid benefits of being a top corporate executive some decades back in the 1960s and 1970s, like company-paid cars, country club memberships, meals and entertainment, gold-plated health insurance, bring-your-family "work" events and vacations, and personal assistants. At the highest level, there were perks like having a plane available for private use. Business owners can have the firm donate to charities, free of taxes, and then have salaried family members run those charities. And this doesn't include executive benefits which are contractual commitments made in the present but only paid in the future, like lavish retirement plans. All of these used to be counted as business expenses, not as income to the executives involved.

These kinds of issues suggest a potential problem in comparing levels of income inequality over time, as is done in the figure above. It may be that in the past, top executives faced higher tax rates on the "income" that they reported for tax purposes, but also received much higher levels of "income" in various untaxed forms via employer-paid benefits. Now these patterns have changed. Top executives face lower tax rates than they did some decades ago on the income reported for tax purposes, but they also have fewer options for receiving such a wide array of untaxed employer-paid benefits.

Kopzcuk and Zwick point out that there have been dramatic shifts in the administrative form in which business income is received in the economy. From the 1960s until into the mid-1980s, more than 80% of business income was typically received by C-corporations--the big companies with lots of stockholders that commonly referred to as "corporations." But since about 2000, it's been common for the C-corporations to receive about 40% of all business income, and even less in some years. Instead, a much larger share of business income is being received by "pass-through" companies, like partnerships, S-corporations and RICS and REITS, where all the profits earned must be passed through to the owners each year. These shifts in corporate ownership affect the ability to keep business income inside the company and thus delay paying income taxes on those earnings, but may also affect the other ways in which the owners of these companies can benefit personally from business expenses. 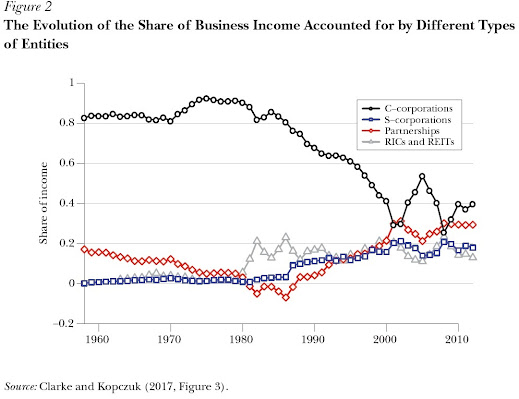 Many other issues arise in thinking about what a full measure of income inequality would look like. There seems to be general agreement that the income inequality has risen in recent decades, pretty much however you measure it, but the specific amount will depend heavily on the measure of income used. The idea of multiple kinds of income inequality shouldn't be a shock: indeed, in some cases it's a feature rather than a bug. For example, in some cases you might want to know about the amount of inequality generated by market-paid wages, and the compare that to the inequality that remains after taxes are paid, and then compare that to the inequality that remains after transfer payments are made, and then dig into how all of these estimates are affected by the problems in measuring "income" described here.

There also seems to be a consensus that these issues are still being worked out, and that it may take some time to work them out. For example, Saez and Zucman write:

In time, we hope that our prototype distributional national accounts will be taken over by governments and published as part of the official toolkit of government statistics. Inequality statistics are too important to be left to academics, and producing them in a timely fashion requires resources that only government and international agencies possess. A similar evolution happened for the national accounts themselves, which were developed in the first half of the twentieth century by scholars in the United States (such as Simon Kuznets), the United Kingdom (such as James Meade and Richard Stone), France (such as Louis Dugé de Bernonville), and other countries, before being taken over by government agencies.

It may take decades before we get there. Economic statistics, like aggregate output or concentration of income, are not physical facts like mass or temperature. Instead, they are creations that reflect social, historical, and political contexts. How the data sources are assembled, what conceptual framework is used to combine them, what indicators are given prominence: all of these choices reflect objectives that must be made explicit and broadly discussed. Before robust distributional national accounts are published by government agencies, there are still many methodological choices to be debated and agreed on by the academic and statistical community. As part of that process, our prototype can be used to characterize the rise of inequality in the United States, to confront our methods and findings with those of other studies, and to pinpoint the areas where more research is needed.

I would be remiss in not mentioning  the third paper published in this same symposium in the Fall 2020 issue of JEP: Florian Hoffmann, David S. Lee, and Thomas Lemieux discuss "Growing Income Inequality in the United States and Other Advanced Economies" (pp. 52-78). These authors look at contributions of labor and non-labor income in contributing to rising income inequality. They focus on rising labor income disparities among different income groups, and some ways in which this plays out differently for men and women. They also show rising inequality of incomes in Germany, Italy, and the United Kingdom, although not in France.
Posted by Timothy Taylor at 9:00 AM