US Income Inequality, According to CBO

For a basic overview of income inequality in the United States, the Congressional Budget Office provides a useful overview in its report "The Distribution of Household Income, 2017" (October 2020). Versions of this report have been coming out for about 40 years. The CBO uses what is called the Statistics of Income, which is based on a nationally representative sample of individual income tax returns collected by the Internal Revenue Service. Thus, the data for income in 2017 wasn't first reported on tax returns until 2018, and it takes a couple of years before the late tax returns have arrived and the comprehensive dataset can be compiled. This CBO report is really just about presenting the data: you need to draw your own policy conclusions. 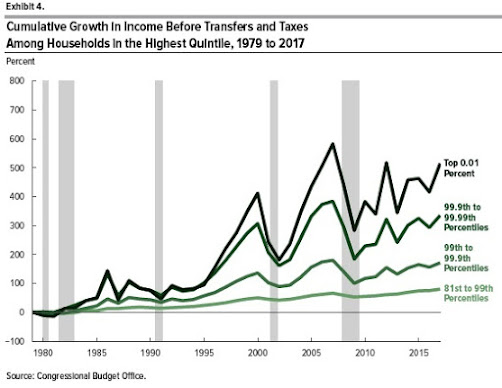 Interestingly, the source of income that has grown the fastest is what is called "business income"--that is, income from owning or running a business which at the top level includes often includes partnerships in large law firms, running as series of car dealerships, and other substantial enterprises. The CBO writes: 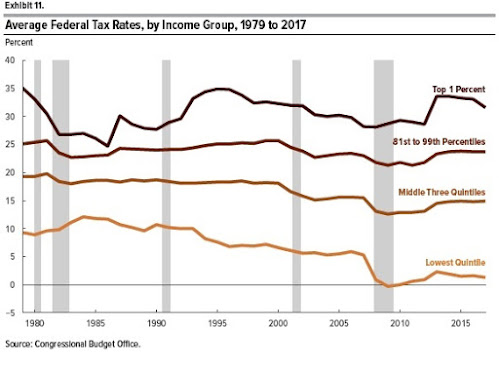 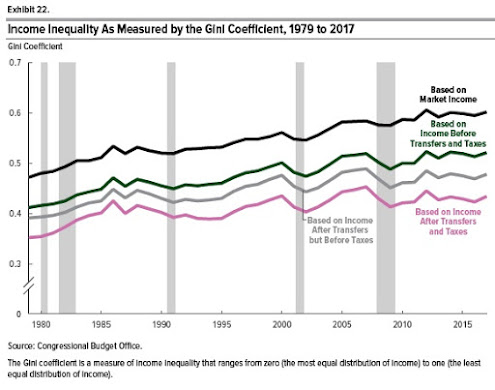 One basic theme that emerges from figures like this is that no matter what metric you choose, income inequality is up. However, it's also true that the combination of government programs has ameliorate the rise in market-based income inequality to some extent: for example, measured by market-based incomed, the Gini rises 13 percentage points from 1979 to 2017  (from .472 to .602), but looking at the bottom line that includes all income and transfers, the rise is about 8 percentage points (from .351 to .434).
Finally, it's also interesting to note that in terms of reducing inequality, a lot of the action happens because of taking Social Security and Medicare into account--that is, it's mainly reducing inequality for elderly Americans. Also, a big chunk of that reduction in inequality--the Medicare portion--doesn't put any income directly into the pockets of the elderly, but instead goes to paying health care providers.
Posted by Timothy Taylor at 1:02 PM