Will China Be Caught in the Middle-Income Trap?

The "middle-income trap" is the phenomenon that once an economy has made the big leap from being a lower-income country to being a middle-income country, then it may find it difficult (although not impossible) to make the next leap from being middle-income to high-income. Matthew Higgins considers the situation of China in "China’s Growth Outlook: Is High-Income Status in Reach?" (Federal Reserve Bank of New York, Economic Policy Review, October 2020, 26:4, pp. 68-97).

China’s growth performance has been remarkable following the introduction of economic reforms in the late 1970s. According to the official data, real GDP growth has averaged 9.0 percent since 1978. ... Rapid economic growth has led to a similar increase in living standards, lifting China out of poverty and into middle-income status. According to official figures, real per capita income has risen by a factor of 25 since 1978. Annual per capita income now stands at about $16,100 measured at purchasing power parity, in “2011 international dollars.” ... This places China at roughly the 60th percentile of the global income distribution, though still slightly below 30 percent of the U.S. level.

A first question, of course, is whether we really believe the official growth numbers, and the answer is "not quite." One difficulty with huge growth numbers over sustained periods of time is that you can project backwards to what the original level of income must have been at the start of the process. Thus, if current Chinese real per capita income is $16,100, and the growth rate has been 9% for (say) 40 years, then the real per capita income for China would have been about $500 before the reforms started. As Higgins spells out the implication:

Indeed, real per capita income [in China] at the start of the decade [the 1980s] would have been below that of most countries in sub-Saharan Africa as well as neighbors such as Bangladesh, Laos, and Myanmar. Although China was clearly a poor country at the time, few would have rated it as one of the poorest. Such a ranking is also inconsistent with data on life expectancy, literacy, and other quality-of-life indicators. Growth rates from the Penn World Table, more plausibly, place China at roughly the 30th percentile of the global income distribution in the early 1980s, ahead of most countries in sub-Saharan Africa but still behind neighbors such as Indonesia, the Philippines, and Thailand.

For comparison, here are China's official growth rates and those from the Penn World Tables: 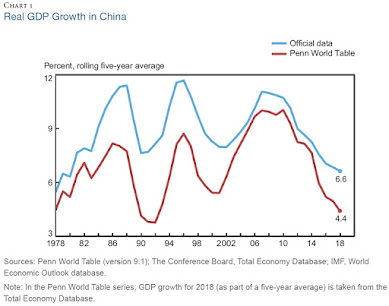 As you might expect, there's been an ongoing controversy for a couple of decades now over what numbers are most accurate, which I will sidestep here (although other papers in this issue of the Economic Policy Review do address them). I'll just point out that if you start adjusting numbers for one country, you need to adjust them for all countries, and when all is said and done, it remains true that China has had decades of extraordinary growth and has become a middle-income economy.
Here, I want to focus on the question of what it would take for China to become a high-income economy, and thus not to succumb to the middle-income trap. As the figure shows, China's growth rates were slowing down even before the trade wars and now the pandemic. Higgins looks at past patterns of countries moving from middle-income to high-income status and writes: 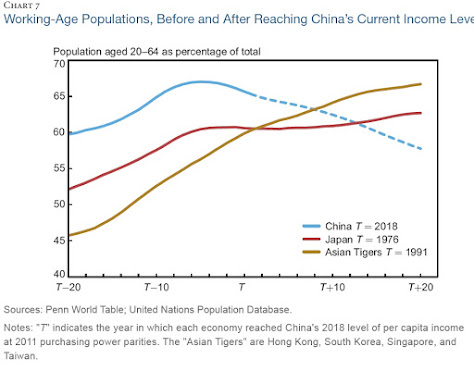 Another issue is that other examples of rapid growth, like Japan, South Korea, and the other east Asian "tigers" kept their growth rates high in part with very high levels of physical capital investment. But China has already gone through a stage of extremely high levels of investment, and is now trying to shift to an economy in which growth is based more on human skills/education, technology, and services.
On the other side, because China's real per capita GDP has only reached about 30% of the US level, there is certainly still room for growth. Higgins writes: "Prospects for rapid growth in China are buoyed by two key factors: the country’s distance behind current global income leaders and its relatively low rate of urbanization. These factors could provide scope for continued rapid growth through `catch-up' effects and structural transformation. ... China’s unfinished structural transformation leaves it with plenty of room to run. How fully China exploits this potential will depend largely on its own policies."
Higgins points out one set of "institutional" policies as measured by the World Bank. The rankings for these policies have been adjusted so that the average for the 121 countries included is set at zero, and the standard deviation is set at 1.0. On five of the six measures, China is below the global average. On all six measures it is well below the high-income countries of the world. One can of course quarrel with the details of how such measures are calculated, but the overall pattern is clear. 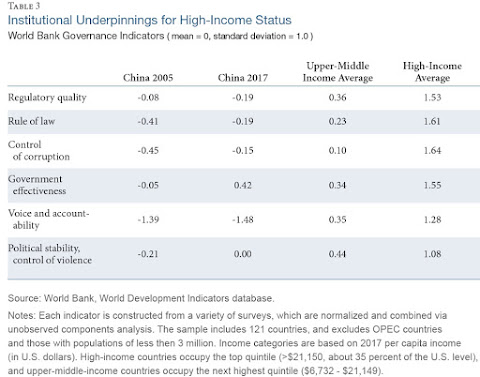 Perhaps the fundamental challenge for China is to recognize that the past 40 years of economic growth were an excellent start to becoming a high-income country, but really only a start, and additional future growth will require even more sweeping and additional changes to the economy and society.
As noted above, this issues of Economic Policy Review has a group of articles on "China in the Global Economy." The four articles are:
Posted by Timothy Taylor at 9:00 AM