Yes, The Other Drivers Went Crazy

The relatively few times I was out on the road back in April and May, right after COVID-19 had started changing all our lives, it seemed to me that the proportion of crazy drivers on the roads was way up. Family and friends had similar hair-raising stories of other drivers blowing through red lights and juking down the highway like a fighter pilot in combat. However, I am congenitally mistrustful of whether anecdotes represent broader patterns, and thus was intrigued that statistics from the National Highway Traffic and Safety Administration (NHTSA) are backing up my experience.

One NHTSA report is "Examination of the Traffic Safety Environment During the Second Quarter Of 2020: Special Report" (October 2020). Here's a figure showing total vehicle-miles travelled in the second quarter of 2020 as compared to second quarter 2019. In April, for example, miles travelled were down 40% in 2020 compared to the same month in the previous year.  Similarly, the number of total vehicle trips per day also fell about 40% that month. 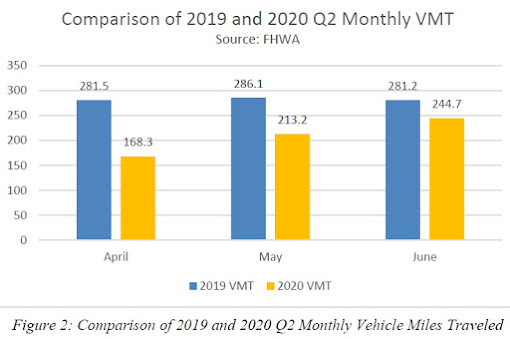 Use of mass transit dropped even more, by as much as 85% from the previous year.  For example, here's a graph on monthly urban rail trips: 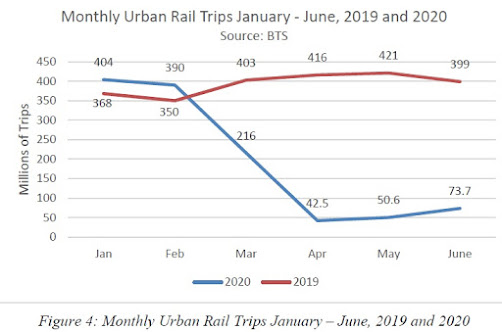 There isn't any single way of measuring "unsafe" driving, but the data provides a lot of clues. Taken together, the clues strong suggest a rise in unsafe driving among those who were on the roads in April and May 2020.
For example, one clue is to look at the vehicle fatality rate per 100 million vehicle-miles travelled. For the last 10 years or so, it's been about 1.1 fatalities per 100 million miles travelled, and this was the rate in the first quarter of 2020. But the fatality rate rose to 1.42 per 100 million vehicle-miles travelled in the second quarter of 2020--a rise of about 30%.  Or to put it another way, vehicle-miles travelled fell 40%, but total fatalities fell only 3%--because those who were driving became more likely to have a fatal accident.
Another clue is to look at data from crashes. For example, a larger share of crashes involved "unrestrained" people who weren't wearing seat belts and those who were ejected from their cars. The NHTSA reports:

Individual State’s data have pointed to a trend of reduced seat belt usage during Q2 months in 2020. For example, Virginia experienced a 15.4-percent increase in the number of unrestrained fatalities between January 1 and May 21, compared to the same period in 2019 (Virginia Department of Transportation, 2020). Minnesota also reported a higher proportion of unrestrained fatalities from January 2020 to June 2020 compared to 2019 (see Figure 7) (Office of Traffic Safety, 2020). 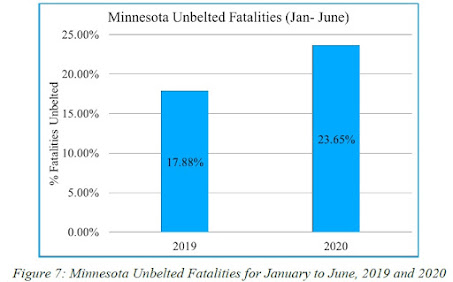 Or here's a figure showing the share of crashes where emergency medical medical services (EMS) was called where the driver was ejected from the vehicle. The rise in April 2020 (after week 12) is clear.

Yet another clue comes from testing crash victims who are brought to trauma centers for alcohol or drugs in their system. There's no nationally representative data here, but here are the results of a small study of trauma centers in five cities:

Thomas et al., (in press) analyzed blood samples from patients in five trauma centers who were treated from September 10, 2019, to July 18, 2020. Using March 17 as the cutoff between pre-COVID-19 and COVID-19 periods, the researchers tested the samples for evidence of drug and alcohol use among seriously and fatally injured road users, which included drivers, passengers, bicyclists, pedestrians, and micromobility users. ... [There was] significantly higher prevalence of alcohol, cannabinoids (these results are for the active components of marijuana), and opioids during the public health emergency compared to before. ... In addition, there was a significant increase in the proportion of people testing positive for more than one category of drugs during the public health emergency.

Here's a final clue: It makes sense that average vehicle speeds were up in April and May 2020, because the sharp decline in traffic meant less congestion, However, it wasn't just average speeds that rose, but also the number of extreme speeders. The NHTSA report notes;

In April and May 2020, news outlets reported large increases in the number of drivers cited for excessive speeds across the country. For example, the Atlanta Journal Constitution reported that the Georgia State Police cited 140 drivers for speeds over 100 miles per hour (mph) in one 2-week period (Wickert, 2020); the Los Angeles Times reported that citations for speeds over 100 mph had increased by 87 percent (McGreevy, 2020); and, the Chicago Tribune reported an increase of 14 percent in speeding citations from automated enforcement (Wisniewski, 2020). Virginia observed that from March 13 to May 21, 2020, speed-related fatalities made up about 50 percent of the overall fatalities, compared to 42 percent in the same period in 2019 (Virginia DOT, 2020).

Why were more people driving crazy in April and May? The NHTSA suggests some possibilities, but doesn't try to quantify them. One simple answer is that when drivers see a more wide-open road, more of them will channel their inner NASCAR.   Surely another answer is that many people were stressed, and a stressed driver is more likely to be unsafe. Another is retail alcohol sales overall jumped, and some larger share of drivers were transporting that alcohol internally. 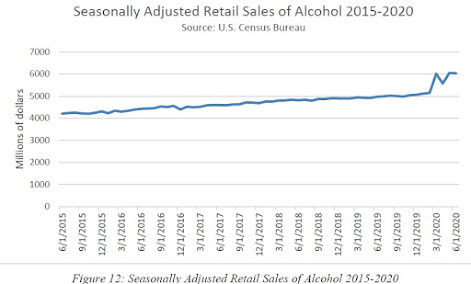 Finally, the  police backed off from traffic enforcement at this time, too, says the NHTSA:

According to a survey released by the International Association of Chiefs of Police (Lum et al., 2020), more than half of the more than 1,000 responding agencies established policies explicitly reducing proactive enforcement including traffic enforcement, in both March and May 2020 when the survey was fielded, and nearly three-quarters had policies mandating the reduction in physical arrests for minor offenses. Drawn from their regular communications with statewide law enforcement entities, NHTSA Regional Administrators (personal communication) shared States’ self-reported decreases in traffic enforcement, including decreases in seat belt enforcement, impaired driving enforcement, and speed enforcement.

I have no deeper lesson here, except to note that the ways in which people react to changes and to incentives can often have many dimensions--some better and some worse--operating all at the same time.