Politics and Attitudes Toward Vaccination

For many people, their willing to be vaccinated apparently varies with whether they are a supporter of the president. For example, here are the results of a series of Gallup polls taken since July on the question: "If an FDA-approved vaccine to prevent COVID-19 was available right now at no cost, would you agree to be vaccinated?" Through July and August, Democrats (blue line) were far more likely to say "yes" than Republicans. But in September, the share of Dems saying "yes" fell sharply while the share of Repubs saying "yes" rose sharply. 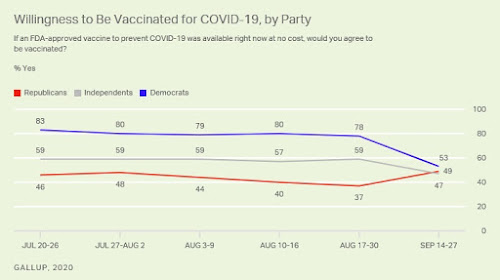 What changed? In late August, the Centers for Disease Control sent out a notice asking states to be ready to operate vaccine distribution centers by November. One might both think that this this announcement was probably premature, with its timing determined by the political calendar, and also  hope that it might possibly be a meaningful statement about progress on a vaccine. But politically, it was being spun as good news for the Trump administration. Thus, Dem willingness to take an FDA-approved vaccine at no cost dropped sharply, while Repub willingness correspondingly rose.
One might suspect that this kind of connection between politics and willingness to get vaccinated is a unique result of the high level of partisanship around the 2020 election, but one would be wrong. Masha Krupenkin has published an article in Political Behavior (published online May 5, 2020), "Does Partisanship Affect Compliance with Government Recommendations?" She asks:

Are partisans less likely to comply with government recommendations after their party loses the presidency? To answer this question, I combine survey and behavioral data to examine the effect of presidential co-partisanship on partisans’ willingness to vaccinate. Vaccination provides an especially fertile testing ground for my theory for three reasons. First, both Republican and Democratic administrations have recommended vaccination as a public health measure. This provides natural variation in control of government, while keeping the government recommendation constant. Second, there is significant survey and behavioral data on vaccine compliance. This allows me to test the effect of partisanship both on peoples’ beliefs about vaccination, and their actual vaccination behavior. Finally, vaccination provides a “hard test” of the hypothesis, since the consequences of non-compliance can adversely impact individuals’ health. If partisanship affects receptivity to vaccination, this finding has important implications for the acceptance of other government interventions that do not carry such high costs for non-compliance.

Another piece of evidence looks at surveys, like the Gallup poll data above, on willingness to be vaccinated.

I look at three cases of partisan vaccination gaps. One of these is the smallpox vaccine in 2003, during the Bush administration. The other two are the swine flu (H1N1) and measles vaccines in 2009 and 2015, both during the Obama administration. This allows me to test whether Democrats and Republicans switch their perceptions of vaccine safety depending on which party is in power. ... Republicans were more likely to believe that vaccines were safe under a Republican president (smallpox vaccine), and Democrats believed the opposite (H1N1, measles). Partisan survey responses to perceptions of vaccine safety seem to “flip” depending on the party of the president.

In short, when people are deciding whether to vaccinate themselves or their children, whether they identify with the party of the president in power is a substantial factor. To put it another way, we all like to think that we are independent and fact-based in our judgment, and surely in some cases we are, but in other cases we are just acting as partisan herds of independent minds.

Vaccinations are not the only illustration of this behavior. As I've noted before, when the Trump administration took actions to limit international trade, support for free trade sharply increased among Democrats. As I wrote there: "But these survey results may also suggest that US opinions about trade are just not very deeply rooted, and are more expressions of transient emotions and political partisanship."

Another example that crossed my line of sight recently involves a Gallup poll question asking what share of people report that either they themselves or a family member has put off health care in the last 12 months for a serious or somewhat serious condition because of cost. As this issue of health care reform reheated as the Democratic primary process got underway in 2019, the share of Democrats reporting postponing care shot up. 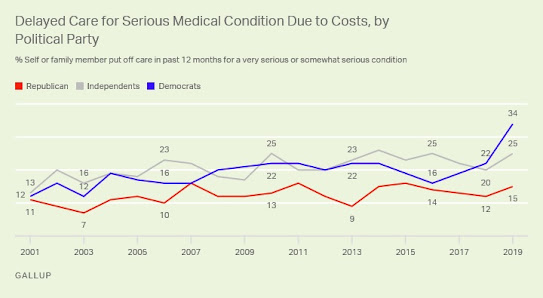 There is no obvious public policy change in 2019 that should have had a much bigger effect on D's than on R's in terms of health care costs. The Gallup report notes: "Whether these gaps are indicative of real differences in the severity of medical and financial problems faced by Democrats compared with Republicans or Democrats' greater propensity to perceive problems in these areas isn't entirely clear. But it's notable that the partisan gap on putting off care for serious medical treatment is currently the widest it's been in two decades."

For an overview of more evidence on how political and partisan identity shapes our perceptions of fact and our stated beliefs, didate. Brendan Nyhan provides an overview of some research in this area in "Facts and Myths about Misperceptions" (Journal of Economic Perspectives, Summer 2020, 34:3, pp. 220-36). My overview of Nyhan's article is here.