US Polling on Attitudes Toward Trade

The Gallup organization has been asking for almost 25 years: "What do you think foreign trade means for America? Do you see foreign trade more as an opportunity for growth through increased U.S. exports or as a threat to the economy from foreign imports?" As I've written before about this poll: "I do need to add in passing that pretty much all economists would view the specific Gallup question, which assumes that exports benefit the US economy and imports threaten it, as a fundamentally wrong-headed view of why an economy benefits from trade." But that said, the results suggest that the low point for attitudes toward trade was during the Great Recession and its aftermath, and since about 2013, more and more people are seeing trade as "opportunity" rather than "threat."

Here's the overall pattern from Gallup based on February 2017 polling: 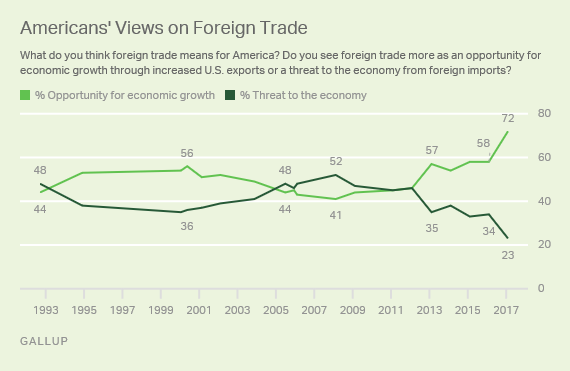 And here's the breakdown by political affiliation: 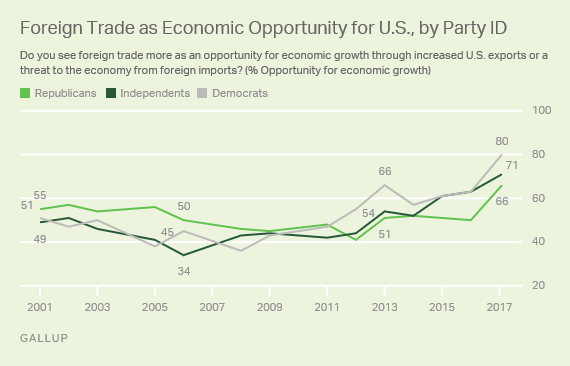 There's also a an NBC News/ Wall Street Journal poll about attitudes toward trade, which asks respondents whether they believe that free trade helps or hurts the country. Here's a figure from the NBC reporting on the poll: How does one interpret this? The NBC story notes the swing since 2010:

Overall, as the Wall Street Journal article on this poll notes, "The poll this month showed the highest portion of Americans who said free trade helped more than hurt since the Journal/NBC News pollsters started asking that question in 1999." In that sense, the findings from the Gallup and NBC/WSJ surveys are congruent with each other, despite the different wording.

But these survey results may also suggest that US opinions about trade are just not very deeply rooted, and are more expressions of transient emotions and political partisanship. After all, for anyone who was watching either Democrats or Republicans during the presidential primaries, it's not obvious that there was a large supply of latent support for trade. The Wall Street Journal report on the NBC/WSJ survey included this comment: "Essentially what this says is how partisan the world is," said Peter Hart, a Democratic pollster who worked on the survey. "If Trump says the world is flat, the Democrats are going to say it's round."

Finally, it's worth a reminder that the US public attitude toward trade are considerably less positive than those in many other countries around the world. For example, here's a table from the IMF, World Bank, and World Trade Organization report, "Making Trade an Engine of Growth for All: The Case for Trade and for Policies to Facilitate Adjustment"  (March 2017), which I discussed in yesterday's post. The share of Americans who think trade is good is lower than in most advanced economies, and most emerging market and developing economies, too. This international pattern has always struck me as little odd, given that trade represents a relatively small share of the US economy--given the huge size of the US domestic market--and a relatively larger share of GDP for most of these other countries. 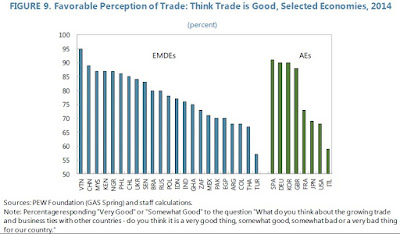