Demand and the Frac Sand Example

Most people who teach economics are on a continual lookout for current examples of supply and demand. Otherwise, you end up falling back on  hypothetical goods like "widgets" and "leets" (which is "steel" spelled backward), at which point you can almost see the life and brightness fade out of the eyes of students.  nice lively example of shifts in demand comes from the demand for sand used in hydraulic fracking operations. As the Wall Street Journal recently reported, "Latest Threat to U.S. Oil Drillers: The Rocketing Price of Sand: The market for a key ingredient in fracking is again surging,"
(by Christopher M. Matthews and Erin Ailworth, March 23, 2017).

A couple of years ago, the USGS published "Frac Sand in the United States—A Geological and Industry Overview," by Mary Ellen Benson and Anna B. Wilson, with a section on "Frac Sand Consumption History" contributed by Donald I. Bleiwas (Open File Report 2015-1107, posted July 30, 2015). The report includes this useful figure, in which the bars show the metric tons of sand used for fracking (measured on the left axis); the numbers above the bars show the number of horizontal drilling rigs in operation in the US during any given week of the year; and the line shows the value of the sand (right axis). 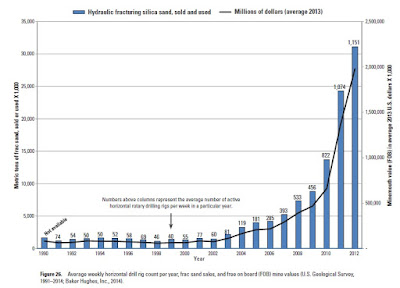 For an update through 2016 on production levels and price, the USGS publishes an annual fact sheet on various minerals. Fracking sand falls into the category of "Industrial Sand and Gravel," of which more than 70% is used for fracking. Here's the relevant table from the 2017 factsheet. Thus, back in 2012 there was about 50 million tons of total sand production, with about 70% of it going to fracking. By 2014, output of sand had doubled--mostly due to increased demand from fracking. The price per ton rose from $52 in 2010 to $106 per ton in 2014. Then output and price sagged in 2015 and 2016.

The Wall Street Journal story reports rising prices for sand this year. It also notes: "In Louisiana, Chesapeake Energy Corp. recently pumped a record 50.2 million pounds of sand into a horizontal well roughly 1.8 miles long, piquing the interest of some rivals who are now weighing whether they can do the same." And here's a figure showing quantities of sand being used in different fields. 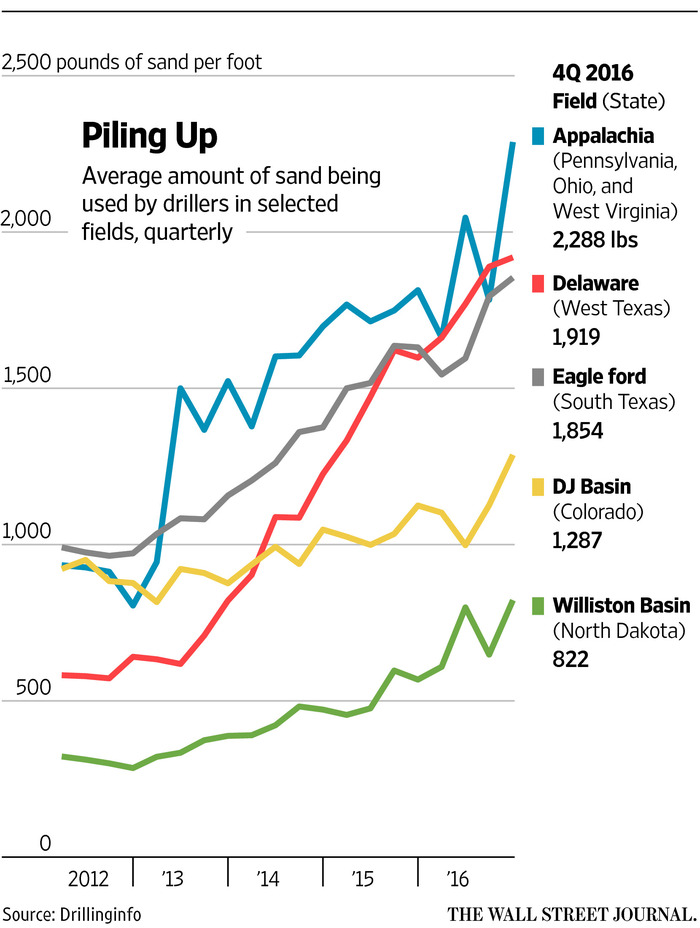 No world-changing lessons here. The higher prices for sand don't seem likely to make much difference in the quantity of fracking, least for now, because sand is a fairly small slice of the overall cost. Environmental concerns are being already being raised in some US locations about the extent of sand-mining, and those concerns are likely to become more acute as the demand for fracking sand rises. But my guess is that if it becomes difficult to increase the supply of fracking sand, then those doing the fracking will either find ways to economize on sand or will figure out some alternative substances that would fill a similar purpose.

Postscript: Some readers might want to revisit my post on  "Demand for Sand" (April 16, 2014), which has some additional background on international demand for sand (mostly for concrete and construction purposes) and some environmental effects of sand-mining.