International trade disrupts the economic patterns that would otherwise exist, and both the benefits and costs of trade flow from such disruptions. The IMF, World Bank, and World Trade Organization have come together to write "Making Trade an Engine of Growth for All: The Case for Trade and for Policies to Facilitate Adjustment," which was published for an international meeting held March 22-23 in Germany.

A lot of the report is about gains from trade, public attitudes toward trade, size of barriers to trade, and possibilities for reducing barriers to trade through negotiations. Here, I'll focus on some points related to the costs of trade disruption and potential policies to address it.

Patterns of global trade in manufacturing have changed substantially since the 1990s. This figure shows that in from 1990-94, 63% of all merchandise trade as between advanced economies. By the 2010-2015 time period, this had dropped to 38%, while 45% of merchandise trade was between advanced economies (AE) and "emerging markets and developing economies" (EMDE), and the remaining 17% was between emerging market and developing economies. 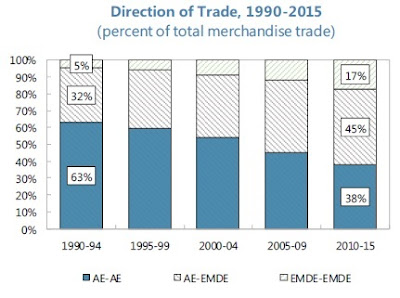 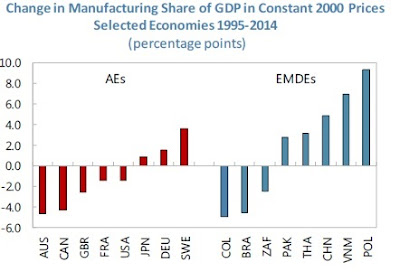 The report notes that the freedome to import from the world economy is a benefit to consumers: in particular, cheap imports are a huge benefit for those with lower incomes. The report offers a figure drawn from a recent paper by Pablo D. Fajgelbaum and Amit K. Khandelwal, "Measuring the Unequal Gains from Trade," Quarterly Journal of Economics, 2016, 131: 3, pp. 1113-1180. The horizontal axis shows how much the real income (that is, the buying power of income) would fall without trade for the lowest decile by income, while the vertical axis shows how much the real income of the top decile would fall. As the graph shows, for all 40 countries in the study, the loss of income for the poor would be greater than for the rich: for example, in the US cutting off trade would reduce the real income of the bottom decile by almost 70%, but of the top decile by less than 5%. 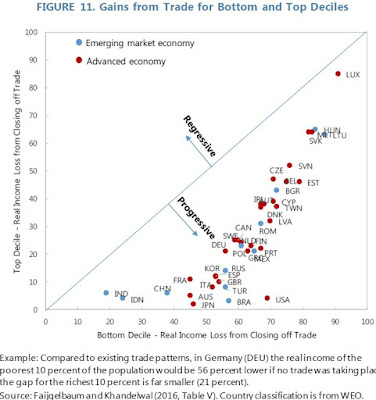 However, trade can also disrupt jobs. The discussion of the report on this point isn't extensive, but here are a few snippets (footnotes omitted for readability):


"According to simulation exercises, adjustment frictions in AEs [advanced economies] can lead to transition periods of up to 10 years and reduce the gains from trade by up to 30 percent (Artuç and others, 2013, Dix-Carneiro, 2014). ...

"An unusual period of sharply increased import competition that began around 2000, along with other factors, appears to have negatively impacted regional labor markets in some AEs. Evidence on most episodes of trade increases suggests that the impact on aggregate labor market outcomes has been mild. When EMDEs [emerging market and developing economies] began to play a greater role in global manufacturing trade, in part reflecting the impact of pro-market reforms in China, a series of studies examined the impact on local labor markets during that period (Autor and others, 2016; Pierce and Schott, 2016a). These studies show that areas more exposed to competition from Chinese manufactures due to their industrial structure saw significant and persistent losses in jobs and earnings, falling most heavily on low-skilled workers. ...

"When switching industries within manufacturing, workers in developed countries have been estimated to forego in terms of lifetime income the equivalent of 2.76 times their annual wage (Artuç and others, 2015). Switching occupations may have similar costs, although these costs vary substantially across occupations and skill levels, with college-educated workers experiencing on average lower costs (Artuç and McLaren, 2015)."


What policies are likely to be most useful for workers dislocated by trade? As the report notes, many of the policies help workers dislocated by trade are the same policies that will help an economy overall to be growing and vibrant. After all, a dynamic and evolving market economy will always experience a churning labor market, with some people losing jobs or leaving jobs and others finding new jobs. Sometimes trade will be the reason, but it can also occur when a suffers domestic competition, or because it falls behind the new technological trends, or because it's poorly managed, or because it misses a shift in consumer tastes.

But going beyond broadly sensible economic policies, are there more focused particular policies that might help adjustment? It's common to discuss "passive" labor market policies like unemployment insurance or early retirement, and to draw a contrast with "active" labor market policies like job search assistance, retraining, incentives for private-sector hiring, and public employment. What's striking from an American perspective is that the US does relatively little of either one compared with many higher-income countries. In this figure the US is the third set of bars from the bottom, just above Chile and Mexico. 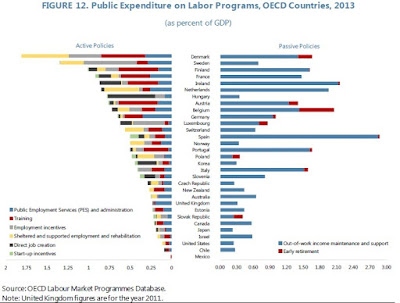 The report describes active labor market policies this way: "Generally, displaced workers are required to participate in interviews with employment counselors, apply for identified job vacancies, formulate individual action plans, accept offers of suitable work, and attend training programs if deemed necessary. A recent OECD study found that these activation strategies helped increase re-employment rates, especially in the case of those that are hard-to-place and the long-term unemployed, as may be the case with trade-displaced workers ,,,"

There are a variety of other recommendations, all hedged about with concerns about appropriate design and administration. For example, job training can work well, but it tends to work better if if is closely connected to an actual job, or even on-the-job training. "Housing policies may be necessary to facilitate geographical mobility." "Credit policies can facilitate the overall adjustment process." "`Place-based' policies can help revive economic activity in harder-hit regions."

What about policies targeted in particular at those who have lost their jobs specifically because of import competition, not for other reasons?


"Well-designed and targeted trade-specific support programs can complement existing labor-market programs. ... The effectiveness of these trade-specific programs has been mixed, however, and their coverage and size tends to be very small."

From a US perspective, my own sense is that the US economy should do considerably more in the area of active labor market policies, retraining, and encouraging mobility, and should be experimenting with other local and regional programs. But the reason for these policies isn't primarily about trade. in the US economy, the dislocations from technology and domestic competition are  considerably bigger than the dislocations from trade. Greater mobility and flexibility across the labor market should tend to benefit all employees, whether they are switching jobs by choice or involuntarily.

Afterword: The IMF/WB/WTO report starts with a quotation from the British historian and occasional political figure Thomas Babington Macauley, who wrote in 1824: “Free trade, one of the greatest blessings which a government can confer on a people, is in almost every country unpopular.” There's no citation in the report, and as regular readers know, I prefer to quote only what I can cite.

In this case, the quotation appears in Macauley's 1824 review, "Essay on Mitford's History of Greece," where a fuller version of the quotation reads: "The people will always be desirous to promote their own interests; but it may be doubted whether, in any community, they were ever sufficiently educated to understand them. Even in this island, where the multitude have long been better informed than in any other part of Europe, the rights of the many have generally been asserted against themselves by the patriotism of the few. Free trade, one of the greatest blessings which a government can confer on a people, is in almost every country unpopular. It may be well doubted whether a liberal policy with regard to our commercial relations would find any support from a Parliament elected by universal suffrage."