For a few years now, Joseph Gyourko has been doing research and writing essays with a focus on housing supply, and in particular, how a collision between local restrictions that hinder home-building combined with growing demand in those localities lead to differences in prices. In an interview with Hites Amir, Gyourko lays out these views in the April 2017 issue of the Global Housing Watch Newsletter. (The newsletter is produced by Amir, who works fo the International Monetary Fund, but it is not an official IMF document).


"In forthcoming work, Ed Glaeser and I conclude that most housing markets in the interior of the country function so that the price of housing is no more than the sum of its true production costs (the free market price of land plus the cost of putting up the structure) plus a normal entrepreneurial profit for the homebuilder. That is what we teach should happen in our introductory microeconomics courses—namely, that price paid by consumers in the market should equal the real resource cost of producing the good (housing in this case). These well-functioning housing markets exist in a broad swath of the country outside of the Amtrak Corridor in the Northeast (Washington, D.C. to Boston) and the major West Coast markets from Seattle all the way down to San Diego. The bulk of the population lives in these well-functioning markets, by the way. They just are not focused on by the media. ...

"Restrictions began to be imposed in many west coast markets in the 1970s, with east coast markets in the northeast following the next decade. Thus, it is the people who owned in those markets at those times who enjoyed the most appreciation in their homes. Those people tend to be senior citizens today, and even if they do not earn relatively high incomes, they are wealthy because of the real capital gains on their homes. ...

"If they limit supply sufficiently relative to demand, then the existing housing units will be rationed by price. Richer households will be able to bid more to live in their preferred markets, so we get the sorting of the rich into the higher priced coastal markets. ... The divergence in home prices between low cost, elastically supplied markets and high cost, inelastically supplied markets has been growing over time—since 1950, at least. ...  This can generate a spiral up in prices, and it can last a long time. In 1950 for example, housing in the most expensive metropolitan areas was about twice as costly as in the average market. At the turn of the century in 2000, the most expensive metros were at least four times more costly than the average market. I expect that gap to widen over the coming decade. ...

"In a well-functioning market with elastic supply, prices should be equal to fundamental production costs. In most American markets, that is no more than $200,000-$250,000."

Here's a figure, which is a version of a diagram that appears in "Superstar Cities," by Joseph Gyourko, Christopher Mayer, and  Todd Sinai in the American Economic Journal: Economic Policy, November 2013 (5:4, pp. 167-99). The figure shows what the distribution of the average house value across US metropolitan statistical areas (MSAs) in 1950 and 2000. Average prices are higher in 2000 than in 1950, which isn't surprising, since the average house is bigger, too. But the key insight here is that the distribution of average housing prices across cities in 1950 is more bunched together, while the distribution across cities in 2000 is much wider, with a long right-hand-tail. 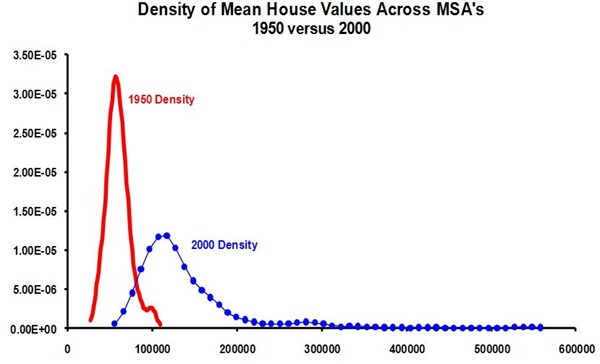 This wider distribution of housing prices across cities has broader trade-offs. It becomes harder for those living in cities with lower housing prices to relocate to cities with higher housing prices. It creates a greater level of economic segregation, because those with higher incomes are more likely to end up living in a smaller number of cities where they can afford the high housing prices, while those with middle-level or lower-level incomes struggle to find alternatives.  It adds a dose of bitterness to local arguments over zoning, because current owners of high-priced houses (whether they have owned a house for decades or bought more recently) live in fear that an increase in the supply of housing--or even building more moderately-sized and -price housing--might in some way limit whether their own home will keep rising in price. Gyourko says:

"I am a traditional housing and urban economist in this regard. New construction imposes real costs on its immediate neighbors and the broader community. Pollution is one, with congestion (on the roads, schools, etc.) being another. It is economically efficient to internalize these negative externalities by ‘taxing’ the developer in some way so the full costs of development are priced and paid for by the builder. What I am not in favor of is excessive regulation that imposes costs much higher than could be justified by spillovers. That results in too little development and creates affordability problems for the poor and the middle class."

In this hyperpartisan time in which we live, I feel compelled to add that the goal of rolling back local restrictions that limit house-building is advocated not just by the usual free-market suspects who tend to lean right politically, but was also supported by the Obama administration. For example, President Obama said in a speech to the US Conference of Mayors in January 2016: "We can work together to break down rules that stand in the way of building new housing and that keep families from moving to growing, dynamic cities." The Obama administration also published a "Housing Development Toolkit" (September 2016) to provide strategies for overcoming excessive local barriers to home-building.
Posted by Timothy Taylor at 8:00 AM