Digital Forces and the Other 70% of the US Economy

For those feeling the need for a bracing dose of optimism about the prospects for US productivity growth, I recommend "The Coming Productivity Boom: Transforming the Physical Economy with Information," written by Michael Mandel and Bret Swanson (March 2017), and published by the Technology CEO Council (which is more-or-less what it sounds like, a "public policy advocacy organization comprising Chief Executive Officers from America’s leading information technology companies, including Akamai, Dell, IBM, Intel, Micron, Oracle, Qualcomm and Xerox.")

What are the industries in these two economic groupings? The digital economy is: "Computer and electronics production; publishing; movies, music, television, and other entertainment; telecom; Internet search and social media; professional and technical services (legal, accounting, computer programming, scientific research, management consulting, design, advertising); finance and insurance; management of companies and enterprises; administrative and support services." The physical economy is: "All other industries, including agriculture; mining; construction; manufacturing (except computers and electronics); transportation and warehousing; wholesale and
retail trade; real estate; education; healthcare; accommodations and food services; recreation." Obviously, their notion "physical" isn't just material goods, but also includes a number of the biggest service industries like health care and education--as long as what is ultimately being delivered is not actually digital in nature.

After dividing up the economy in this way, here are a couple of the patterns they find. The first figure compares investment in information technology in the digital and physical sector; the other compares productivity growth in these two sectors. 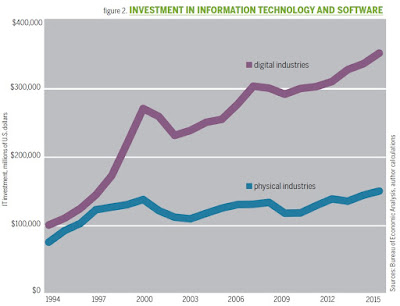 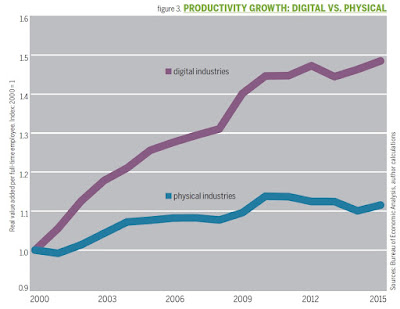 They argue in some detail that with appropriate investments in  information technology, and the associated rethinking of production and output, substantial productivity growth is  possible in manufacturing, transportation, education, health care, wholesale/retail sales and other areas. One recent example is how how information technology, by allowing dramatically mapping of underground geological formations, has boosted production of natural gas from shale.

What about manufacturing in particular? They write:

What about robots? According to trade  association data, 31,000 robots valued at
$1.8 billion were shipped to North American  customers in 2016. The spending on robots
pales next to the $300 billion in industrial equipment and manufacturing buildings that
corporations spent in the United States in 2016. In many cases, robots help the United
States retain jobs. Consider a modern semiconductor fab, which has installed a proprietary network of wafer-handling robots. This system probably reduced the number of wafer-handling jobs by several dozen. Yet the robots allowed the new fab to be built in the United States, instead of in a low-cost overseas location, thus saving or creating some 1,200 high-paying American jobs.

The upside of robots in manufacturing spreading out into new industries is thus enormous. That’s crucial for increasing the productivity of existing manufacturing processes and  creating new processes altogether. In many ways manufacturing is the classic case where atoms will be boosted by bits. The process is already underway—but the diffusion of the Industrial Internet across the manufacturing sectors will take place over the next two decades. New, IT-enabled product categories, combined with design and customization that increasingly treats manufacturing as a service, will not necessarily bring back “old  jobs” but instead create new and better ones. ...

Economists are constitutionally suspicious of claims that large gains are out there, just waiting to be achieved. As economists like to say, " If there's a $20 bill out there on the sidewalk, why hasn't someone already picked it up?" Mandel and Swanson offer this answer:

"Why has it taken so long? It sounds like a tautology, but industries whose output is information are inherently more amenable to digitization. ... But when we examine industries whose output is primarily physical, the game gets far more difficult. To digitize a complex physical object such as a spinning jet engine, an unknown natural environment such as a buried oil field, or a rapidly changing manmade environment such as the traffic and work patterns of a large city, requires a level of sophisticated technology that was not available until fairly recently. Low-cost sensors that can be widely distributed; high-bandwidth wireless networks capable of collecting the information from the sensor; computing systems capable of analyzing terabytes of data in real time; artificial vision that can make sense of images and artificial intelligence that can make decisions—each of these are necessary parts of applying IT to the physical industries. Continued advances and price reductions in sensing, cloud computing, and broadband connectivity, combined with new thinking and new focus about how to apply these technologies to physical problems, are finally about to open up the other four-fifths of the economy to the magical laws of Moore and Metcalfe. ... Moore’s law, named after Intel founder Gordon Moore, refers to the tendency of silicon microchips to roughly double in cost performance (because of the industry’s remarkable ability to scale transistors and other chip features) every 18 months to two years. ... Metcalfe’s law refers to the observation by Ethernet inventor Robert Metcalfe that the power or value of networks rises not by the number of connected nodes but by something resembling the square of the number of nodes. This is one reason “network effects” can be
so powerful.

My own sense is that the answer to "why has it taken so long" goes beyond technology. In the first decade of the 20th century, many firms in the physical economy were often focused on how to cut costs by outsourcing or setting up global production chains, The leading providers in industries like health care and education seem exceptionally set in their traditional ways, with practices are hard for either internal executives or external entrepreneurs to uproot. The Great Recession discouraged firms across the economy from investing for a time. But it does seem at least imaginable to me that these patterns are shifting. The most important infrastructure for encouraging economic productivity during  the first half of the 21st century won't be isn't roads and bridges, but a combination of secure information communication network and a reliable energy supply.

Mandel in particular has a track record here. Back in the mid-1990s, when he was writing for Business Week, he wrote about the potential for real economic growth in what he called the "new economy" (for example, here) before it became evident to everyone else in the official statistics.
Posted by Timothy Taylor at 10:18 AM