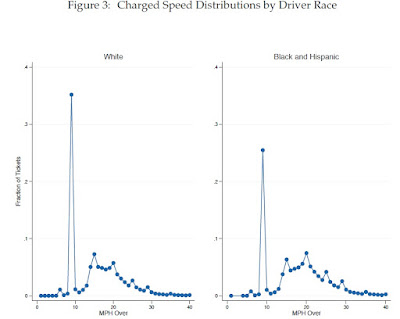 2) The jump at 9 mph is sometimes called a "bunching indicator" and it can be a revealing approach in a number of contexts. For example, if being above or below a certain test score makes you eligible for a certain program or job, and one observes bunching  at the relevant test score, it's evidence that the test scores are being manipulated.  If being above or below a certain income level affects your eligibility for a certain program, or whether you owe a certain tax, and there is bunching at that income level, it's a sign that income is being manipulated. Real-world data is never completely smooth, and always has some bumps. But the spikes in the figure above are telling you something.

3) Goncalves and Mello note that the spike at 9 mph is higher for whites than for blacks and Hispanics. This suggests the likelihood that whites are more likely to catch a break from an officer and get the 9 mph ticket. The research in the paper investigates this hypothesis in some detail: if your statistics and modelling tools are all shiny and up-to-date, feel free to check out their argument. They summarize their key findings this way:


"These racial disparities remain after controlling for an array of stop and driver-level characteristics, including speed limit and stop location, age, gender, vehicle type, ZIP code income level, and prior tickets, which we treat as evidence that, on average, officers behave less favorably towards minority drivers. ...  [T]he majority of officers exhibit no bias, with the aggregate disparity in treatment explained by the behavior of a small minority of officers composing about 20% of the patrol force. We also explore how bias varies with officer-level characteristics, documenting that officers exhibit own-race preferences and that younger, female, and college-educated officers are less likely to be biased."

4) It's common in studies of discrimination and bias that use real-world data to discover confounding factors that make it hard to draw crystal-clear conclusions. In this study, one pattern that emerges is that "the most lenient officers patrol in counties with the fewest minorities – 47% of the white-nonwhite speed gap disappears without bias or sorting of officers across counties." Thus, in considering ways of reducing the bias shown in the data, "Perhaps most effective and easily implemented, reassigning officers across counties within their troops so that minorities are exposed to more lenient officers can remove essentially the entire white-minority lenience gap." Of course, this raises the pointed questions of why officers tend to be more lenient in areas with few minorities, and whether the more lenient officers would continue to be as lenient if they were rotated into areas with more minorities.

5) In the big picture, one of the reminders from this research is that bias and discrimination doesn't always involve doing something negative. In the modern United States, my suspicion is that some of the most prevalent and hardest-to-spot biases just involve not cutting someone an equal break, or not being quite as willing to offer an opportunity that would otherwise have been offered.