When you look up economic statistics about inequality, you often see it measured with a Gini coefficient. But where does the Gini coefficient come from, how is it calculated, and intuitively what does it mean? Here are some thoughts.

The most straightforward way to think about the Gini coefficient is to start with a different but related tool for measuring inequality, a figure called a Lorenz curve. The Lorenz curve was developed by an American statistician and economist named Max Lorenz when he was a graduate student at the University of Wisconsin. His article on the the topic "Methods of Measuring the Concentration of Wealth," appeared in Publications of the American Statistical Association , Vol. 9, No. 70 (Jun., 1905), pp. 209-219.  The Congressional Budget Office presented a nice tight description of a Lorenz curve in a 2011 report:

"Lorenz curves for actual income distributions fall between those two hypothetical extremes. Typically, they intersect the diagonal line only at the very first and last points. Between those points, the curves are bow-shaped below the 45-degree line. The Lorenz curve of market income falls to the right and below the curve for after-tax income, reflecting its greater inequality. Both curves fall to the right and below the line of equality, reflecting the inequality in both market income and after-tax income." 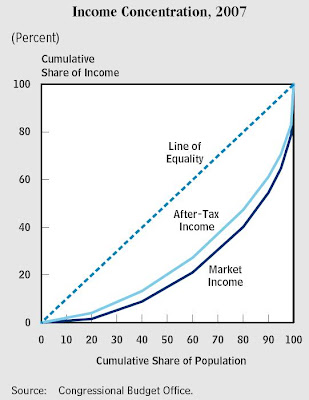 The Gini coefficient is calculated as an area taken from the Lorenz curve. The Gini coefficient was developed by an Italian statistician (and noted fascist thinker) Corrado Gini in a 1912 paper written in Italian (and to my knowledge not freely available on the web). The intuition is straightforward (although the mathematical formula will look a little messier). On a Lorenz curve, greater equality means that the line based on actual data is closer to the 45-degree line that shows a perfectly equal distribution. Greater inequality means that the line based on actual data will be more "bowed" away from the 45-degree line. The Gini coefficient is based on the area between the 45-degree line and the actual data line. As the CBO writes in its 2011 report:

To put it another way, the Lorenz curve plots the full range of data on the distribution of income. The Gini coefficient boils down that full range of data to a single number, which is why it's useful for comparisons. But because the Gini boils down the overall distribution of income to a single number, it also loses some detail. For example, if the Gini coefficient has risen, is this because the share going to the top 20% went up, or the top 10%, top 1%, or top 0.1%? You can see these kinds of differences on a Lorenz curve, if you know what you're looking for, but the Gini alone doesn't tell you which is true.

So that's the graphical meaning of the Gini coefficient. But what is the intuitive meaning? I posted last weak about an intriguing "Chartbook of Economic Inequality," written by Tony Atkinson and Salvatore Morelli. In their overview of why they use the statistics they use, they write:

"The [income] distribution is summarised in a single summary statistic, typically the Gini  coefficient, which is not our preferred statistic but that most commonly published  by statistical agencies. The explanation of the coefficient given by most agencies  takes the form of geometry, but we prefer to describe it in terms of the mean  difference. A Gini coefficient of G per cent means that, if we take any 2 households from the population at random, the expected difference is 2G per cent of the mean. So that a rise in the Gini coefficient from 30 to 40 per cent implies that the expected difference has gone up from 60 to 80 per cent of the mean."

Atkinson and Morelli add another way to interpret the Gini coefficient:

Note: This post in part recycles some explanations of the Gini that appeared previously in this blog several years ago, but it seemed useful to put the discussion all in one place.
Posted by Timothy Taylor at 8:00 AM