Will Real Interest Rates Bounce Back?

Back around 1983, I remember visiting friends in San Diego and making a day-trip over into Mexico. As we crossed the border, I remember billboards advertising that banks were paying an interest rate of 80% on deposits, which sounds like a good deal, unless you also happened to recognize that the interest rate was being paid in Mexican pesos, and Mexican inflation at that time was spiking over 100%.  The real interest rate--the nominal rate minus inflation--was negative.

The world economy has been going through a period with extremely low real interest rates in the last few years, and the IMF examines the causes and likely future patterns in Chapter 3 of the most recent World Economic Outlook report: "Perspectives on Global Real Interest Rates." 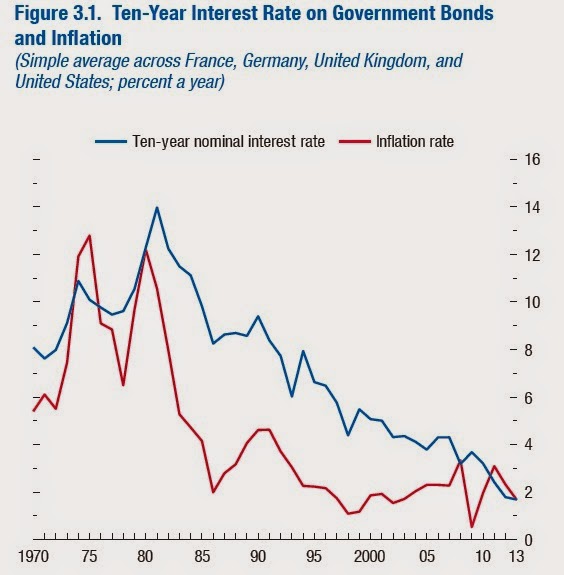 Of course, the real interest rate is just a price. It's the price you pay pay for borrowing, or the price you receive for saving. When a price falls, economists look to the basic supply-and-demand model to organize their thinking. Either a rise in the supply of savings going into the low-risk government bonds or a fall in the demand for borrowing, or both, could result in a lower real interest rate. Increases in the supply of saving at the global level can come from higher private saving, higher government saving (that is, lower budget deficits or budget surpluses), or monetary policy. The demand for borrowing can come from private-sector investment demand or from a shift in portfolios in which many investors looking for lower risk decide to shift some of their funds toward government bonds and away from other assets. After looking at the data, the IMF lays out the main patterns over time this way:

On the demand or investment side, global investment relative to GDP has stayed relatively constant over time, but the ratio has risen sharply since 2000 for emerging market economies while falling in advanced economies. Of course, this change has implications for where growth will occur in the future. The IMF suggests that investment levels in advanced economies are not likely to recover to pre-crisis levels for the next five years, so there is unlikely to be a surge of demand for borrowing from this area that would drive up real interest rates. 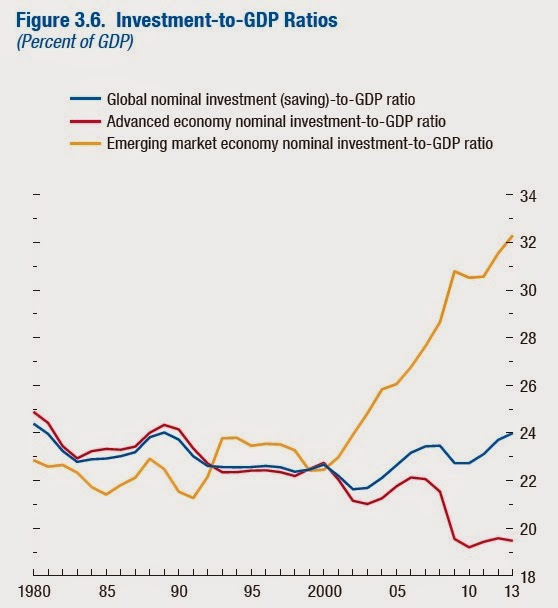 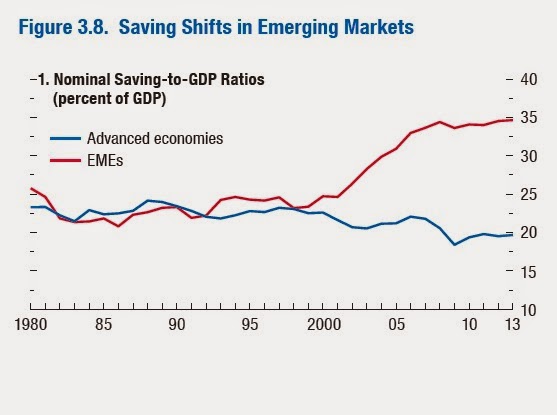 Thus, the overall prediction is that investment in advanced economies will rise a bit, and the savings rate in emerging economies will sag a bit, but the rise in real interest rates will be muted for the next few years. As the IMF writes: "In summary, real [interest] rates are expected to rise. However, there are no compelling reasons to believe in a quick return to the average level observed during the mid- 2000s (that is, about 2 percent)."
Posted by Timothy Taylor at 10:06 AM