One of the most important issues in thinking about the economic growth potential for the U.S. economy is this question: Has the U.S. economy already seen most of the economic growth that will result from the innovations in information and communication technology, including the web, the cloud, robotics, and so on? Or is the U.S. economy perhaps only a fraction of the way--perhaps even less than halfway--through its adaptation to the potential for productivity gains from these technologies, and thus has stronger prospects for future growth?

When confronted by these kinds of questions, hindsight is clearer than foresight. And among economic historians, it is actually a standard insight that major new technologies can take decades to diffuse through the economy. Rodolfo E. Manuelli and Ananth Seshadri offer an example in "Frictionless Technology Diffusion: The Case of Tractors," which appears in the April 2014 issue of the American Economic Review. (The article is not freely available on-line, but many readers will have access through library subscriptions. Full disclosure: the AER is published by the American Economic Association, which also publishes the Journal of Economic Perspectives, where I work as Managing Editor.) They point out that in simple economic models, a firm just chooses a technology--and can choose a new technology at any time it wants. But in the real world, new technologies often take time to diffuse. They note that surveys of dozens of new technologies often find that it takes 15-30 years for a new technology to go from 10% to 90% of the potential market. But some major inventions take longer.

Here's how the tractor slowly displaced horses and mules in the U.S. agricultural sector from 1910 to 1960. Horses and mules, shown by the black dashed line and measured on the right-hand axis, declined from about 26 million in 1920 to about 3 million by 1960. Conversely, the number of tractors, shown  by the blue solid line, rose from essentially zero in 1910 to 4.5 million by 1960. 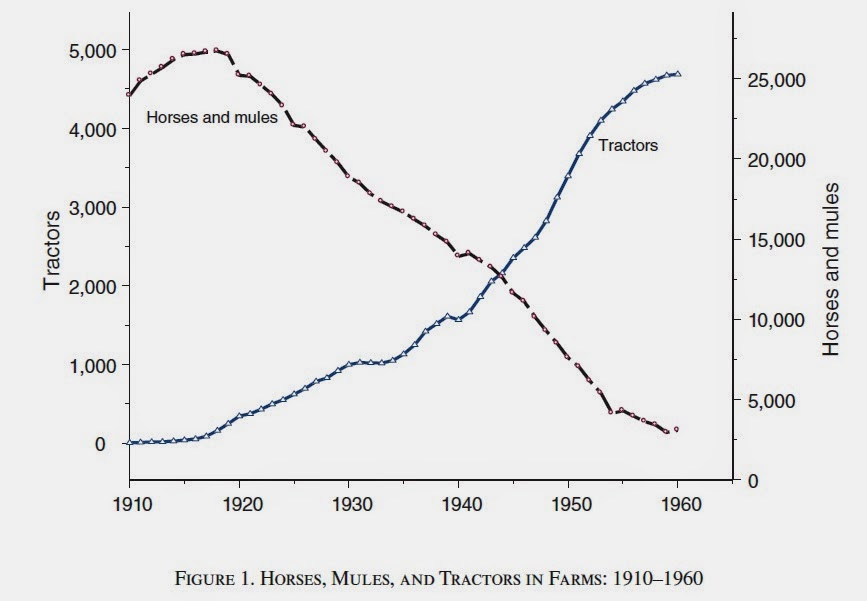 What factors might explain why it would take a half-century for tractors to spread? Lots of answers have been proposed: farmers needed time and experience to learn about the new technology; older farmers preferred not to learn, but gradually died off; some farmers didn't have large enough farms to make tractors economically viable; some farmers didn't have the financial ability to invest in a tractor; there was a lack of information about the benefits of tractors; established interests like the horse and mule industry pushed back against tractors where possible. Manuelli and Seshadri offer another explanation: During much of this time, the quality of tractors was continually improving, and also during the earlier part of this time period (like the Great Depression) wages for farm workers were not rising by much. Thus, it made some sense for a number of farmers to avoid buying the early generations of tractors. Let someone else work out the kinks! But as the quality of tractors improved and wages of farmworkers rose, investing in a tractor began to look like a better and better deal.

My own personal favorite example of the slow diffusion of technology was laid out by Paul David in "Computer and Dynamo: The Modern Productivity Paradox in a Not-too-Distant Mirror," which appeared in a 1991 OECD book called Technology and Productivity: The Challenge for Economic Policy.  At the time David was writing, the U.S. was still mired in a productivity slowdown that had started in the 1970s. However, there had clearly been a lot of computerization during that time, leading to a much-repeated comment from Robert Solow: "We see computers everywhere except in the economic statistics." David harked back to the historical example of using dynamos to produce electricity, explaining that this innovation was around for decades, sometimes at what seemed to be very large scale, before it showed up in productivity gains.

Dynamos had been producing electricity that was used for illumination since the 1870s. This technology was well-known enough that the Paris Exhibition of 1900 included many examples of electrical machinery, run from the power generated by dynamos that were 40 feet tall. But the Paris Exhibition also used electric light on a more widespread basis in public spaces than ever before. David wrote: "Although Europeans already knew of electric lighting for decades, never before Paris 1900 had it been used to illuminate a whole city--in such a way that outdoor festivals could continue into the night."

However, despite the demonstrated technological capabilities of generating and using electricity, and what seemed like a strong array of technological and scientific breakthroughs, productivity growth in the U.S. and the UK economies was actually relatively slow for about two decades after 1890. It's not until the 1920s that productivity growth based on electrification really took off. In retrospect, the reasons why are clear enough. Although the technology was already well-known, it took time for electrification to become widespread. Here's one figure showing diffusion of electrification in the household sector, and another showing the industrial sector. You could illuminate Paris with electrical light in 1900, but most places in the US didn't have access to electricity then. 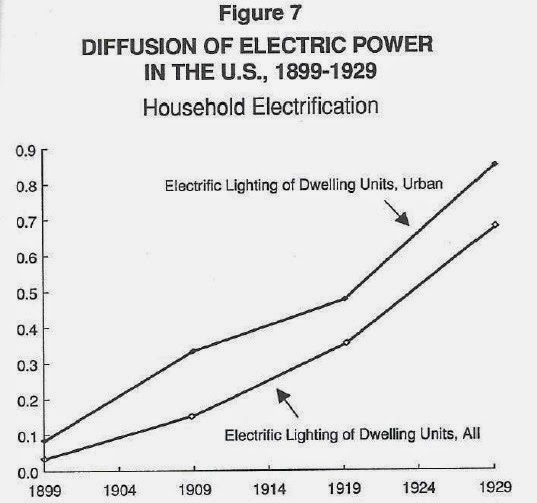 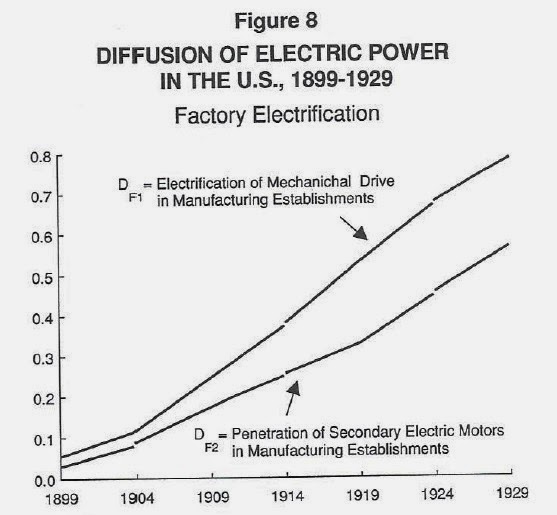 But it wasn't just the spread of electricity. It was also the changes that industry and households needed to make to take advantage of it. Factories had long run on a "group drive" principle, where a single source of power (like water power or steam engines) powered everything through a series of gears. A "group drive" arrangement set constraints on the location of the factory and the organization of the machines. Electrification made "unit drive" possible, where factories had much more freedom to choose their location and set up their machines, but it took time and learning to figure out the best ways of doing this. More broadly, electricity changed everything from the lighting in factories to the fire safety, along with changes in the ability to develop new chemical and heating processes, and much more. For US households, it took time--really up into the 1920s--until they had both a source of electricity and also a supply of new household appliances like the vacuum cleaner, radio, washing machines, dishwasher, and all the changes of lifestyle that came with reliable indoor electric light.

In the mid-1990s, several years after Paul David's essay was published, a US productivity resurgence rooted in making and using information and communications technology did occur. It didn't happen on the time and schedule that many had been expecting . But as David wrote, many people "lose a proper sense of the complexity and historical contingency of the processes involved in technological change and the entanglement of the latter with economic, social, political, and legal transformations. There is no automaticity in the implentation of a new technological paradigm, such as that which we presently discern is emerging from the confluence of advances in computer and communications technologies."

In my own mind, examples like the slow spread of the tractor and electrification suggest the possibility that we may be only a moderate portion of the way through the social gains from the information and communications technology revolution. One of the reasons that tractors spread slowly was that the capabilities of tractors were steadily rising, which made them more attractive over time. In a much more extreme way way, the power of information and computing technology continues to rise, which keeps opening new horizons of potential uses and applications. One of the reasons that electrification spread slowly is that it took time for producers to rethink and revise their processes in a fundamental way, and time for spread and power of electricity to increase, and time for the invention and spread of household appliances related to electricity. In a similar way, my sense is that many firms are still very much in the process of rethinking and revising their processes in response to the developments in information and communications technology, the capabilities of that technology (like faster wireless speeds and computational power) continue to evolve, and the range of new household products using that technology (in areas from automated homes to entertainment to driverless cars and  robotics) continue to expand.