Venture Capital: Looking for the Big Ones

With the venture capital industry, you always hear about the big successes. But what about the failures? Thus, I give credit to Bessemer Venture Partners, a company with claim to being the oldest US venture capital firm with more than a century of experience, for publishing an "anti-portfolio" webpage--that is, the firms that they passed on which turned out to be big successes.  Here are some samples:

Part of the lesson here, of course, is that picking successes is really hard, even for highly successful venture capitalists. A typical rule-of-thumb is even after the venture capitalist chooses investments with all due diligence, about one in ten are highly successful. Here's some industry data on the distribution of costs and returns from Adams Street Partners, another well-known venture capital firm. The blue bars show the proportion of total costs for venture capital firms and the red lines show the proportion of total realized value. Thus, the first to bars illustrate that about 45% of the investments of venture capital firms, by value, pay back less than half of what was invested, and in total represent only a couple of percentage points of the total value of the firm. Indeed, many of these investments end up being worth nothing at all. At the other end, about 10% of venture capital investments by cost end up providing a return that is more than 5 times the original investment, and these lead to about 60% of the ultimate value of the firm. 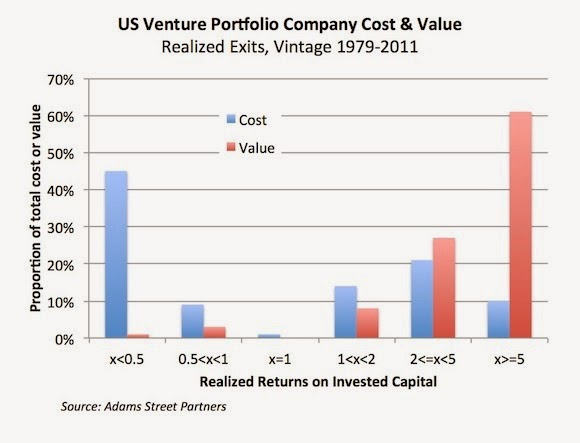 If you want a quick overview of the U.S. venture capital industry, the 2013 NVCA Yearbook is a useful starting point. Here's a figure showing the total capital under management by venture capital funds. Perhaps not unexpectedly, the total rose sharply during the dot-com boom in the late 1990s, then flattens out in the early 2000s, and drops with the  Great Recession. However, it still remains much higher than, say, the early or mid-1990s. 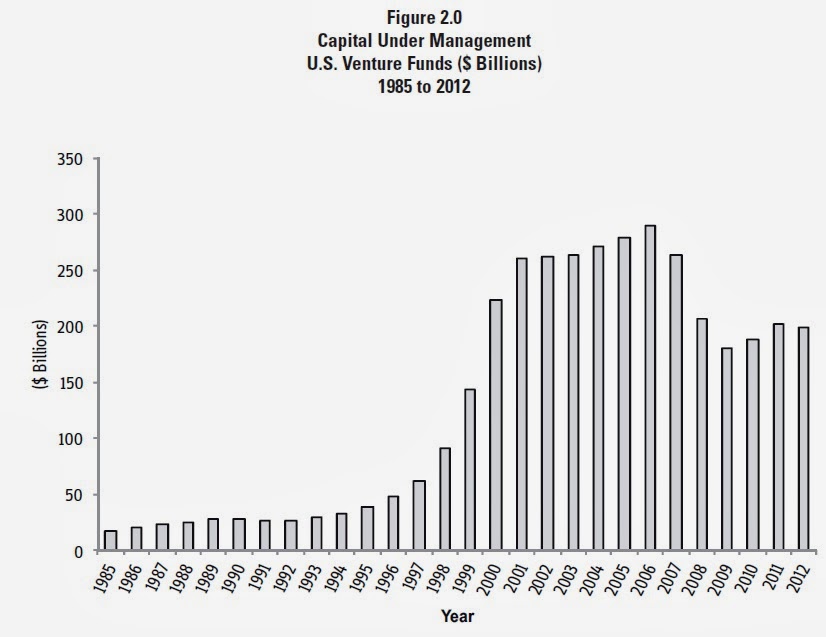 And here's a figure showing the new commitments of venture capital each year. Again, the pattern is a huge increase in the late 1990s, a drop-off in new capital in the early 2000s, but then a level of new commitments in the last few years that seems permanently higher than the early and mid-1990s. 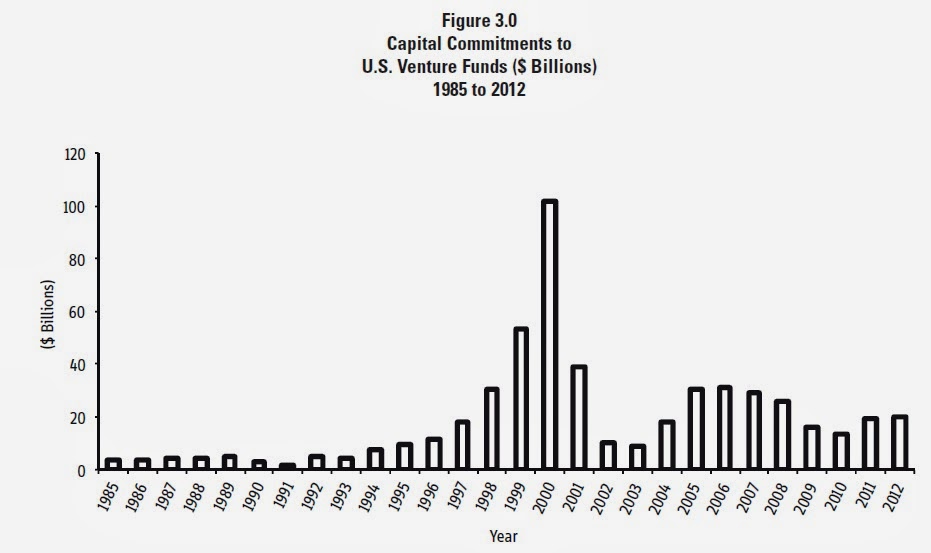 Venture capital is obviously a relatively small part of the enormous US financial sector. For research and development projects that need to be very large in size right away, or where the commercial prospects are uncertain and distant, venture capital is unlikely to be a useful funding mechanism.

But for new possible ventures of the financially appropriate size, where it's possible to start small and scale up with success,venture capital does some things extremely well. It sets up a structure where everyone expects that failures will be common and expected--both the failures of choosing an investment that fails and the failure to spot a profitable investment in the first place. Because failure is expected and common, successful venture capital firms have to become good at cutting off the financing to companies that aren't developing as hoped. Big companies and organizations--including large banks and the government--often have a very hard time with the notion that they will invest in a high proportion of outright failures. Big organizations also typically have a hard time with the notion that it's foolish to throw good money after bad, and that if a project or company isn't going well, it should just be stopped so that resources can be allocated elsewhere. Thus, venture capital offers an alternative structure for funding projects that have on average a high failure rate, but with a possibility of being great successes--which is what makes the smallish venture capital sector a key part of the U.S. financial ecosystem.