The World Health Organization has just released estimates that 7 million people around the world died from air pollution in 2012, which is about one in eight of all deaths in the world that year, and "confirms that air pollution is now the world’s largest single environmental health risk." Most of the deaths are from heart disease, stroke, lung cancer, and for children, acute lower respiratory infections. A fact sheet titled "Burden of disease from Household Air Pollution for 2012" offers some details by region.

Perhaps surprisingly, more than half of the deaths from air pollution are from household air pollution (HAP), typically from low-income people who use solid fuels to cook indoors. Most of these deaths occur in poor areas of southeast Asia, the western Pacific,  and Africa. 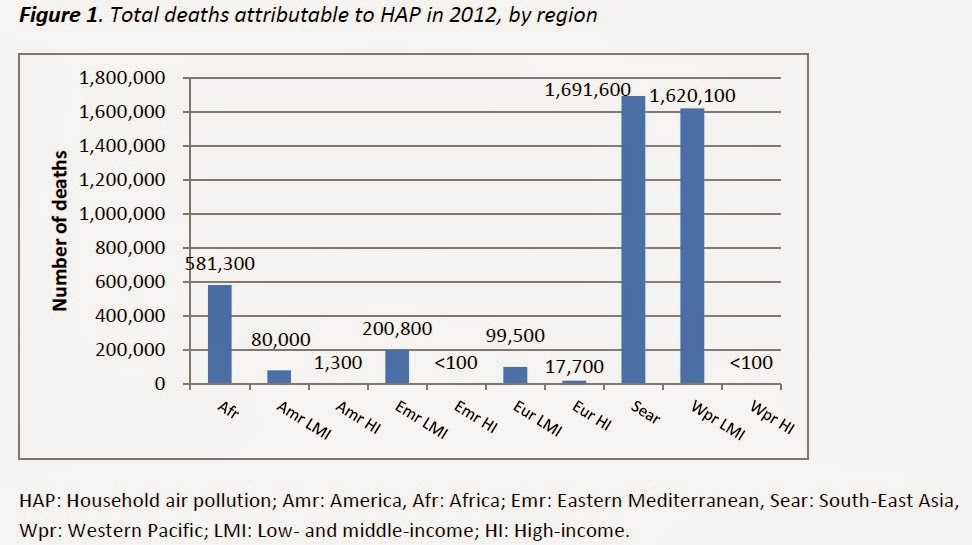 An accompanying feature story from WHO, called "Clean household energy can save people’s lives," offers some detail about cooking indoors in India:


"Many women do not realize that the smoke emitted from the traditional clay or brick stoves called chulhas is putting their and their family members’ lives in danger. The solid fuels they use in these ovens include a mix of wood, coal, crop residue and cow-dung. Their smoke contains many dangerous pollutants such as fine particulate matter and carbon monoxide.

“Having an open fire in your kitchen is like burning 400 cigarettes an hour,” says Dr Kirk Smith, a Professor of Global Environmental Health from the University of California at Berkeley, who began to measure the air pollution exposure from cooking over open biomass cook stoves already in the 1970s. “Unfortunately, we have not made a lot of progress in the past decades and household air pollution is still the largest single health risk factor for Indian women and girls.”

An estimated 700 million people in India still rely on solid fuels and traditional cook stoves for domestic cooking despite their negative impact on peoples’ health. This figure has remained relatively constant over the last three decades despite efforts to improve access to cleaner energy sources such as gas and electricity also in rural areas."

The remaining 3.7 premature deaths caused by air pollution are from ambient air pollution--that is, in the outdoor air. Again, in terms of absolute numbers, most of these deaths occur in the western Pacific and south-east Asia regions, where both air pollution levels and populations are especially high. However, it's worth noting that even  in the high-income parts of the Americas, referring mainly to the United States and Canada, there are an estimated 94,000 deaths per year from outdoor air pollution. 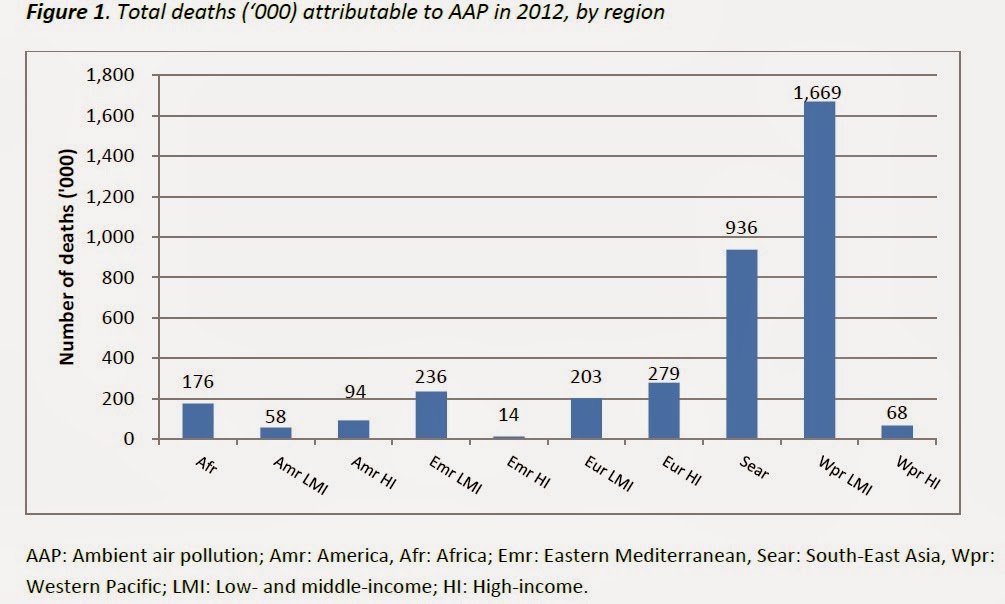 Here's an earlier post that discusses research on "Costs of Air Pollution in the U.S." And here's some discussion of the costs of soot and methane, two elements of air pollution that both have immediate health costs and also are potential contributors to increasing the risks of disruptive climate change.

I wouldn't mind it if some of the political and policy energy focused on how climate change can affect us all in a few decades was refocused on how current air  pollutants are killing millions of people per year right now.
Posted by Timothy Taylor at 6:00 AM