Grocery Shopping in France, the UK, and the US

Food purchases are different in the United States, France, and the United Kingdom. "For example, US households purchase more calories per person. A greater percentage of those calories comes in the form of carbohydrates, and a lower share in the form of proteins. A higher share of expenditure is on drinks and prepared foods, and a lower share is on fruits and vegetables." Pierre Dubois, Rachel Griffith, and Aviv Nevo dig into these questions in their paper, "Do Prices and Attributes Explain
International Differences in Food Purchases?" which appears in the March 2014 issue of the American Economic Review (104:3, pp. 832-867). The AER isn't freely available on-line, but many readers will have access through library subscriptions. For me,  the paper is a useful exercise in showing how statistics about averages can still paint a picture of real people behave.

The authors have information from household surveys in which thousands of households in each country recorded all their purchases of food for consumption at home. (One limitation of this data is that it doesn't look at food consumed in restaurants.) As they write: "We have information on quantities, prices, and characteristics of the products purchased at the level of the individual food product, as defined by the barcode or what is called the Universal Product Code (UPC) in the United States. The characteristics include nutritional characteristics such as calories, proteins, fats, and carbohydrates, as shown on nutritional labels." Here's are some overall patterns, expressed in terms of average per adult per day:

For example, note that Americans spend less per person on food each day, and also consume more calories. This pattern is of course no surprise to economists, because food prices in the U.S. are on average lower, so a basic economic model would expect quantity demanded to be higher. Notice also that compared with the French, Americans on average consume less fat and less protein, but more carbohydrates. They can also look not at what is spent on categories of food, but also at the quantities of food purchased for home consumption. This table shows quantities consumed, and share of calories, calculated per adult for three-month period. Americans get a higher share of their (higher level of) calories from prepared foods and from drinks. Apparently, the French are much more likely to purchase water in the drinks category. The typical American consumes a smaller quantity of vegetables than the French or the British, and a smaller quantity of dairy. The Americans and French consume about the same quantity of meat, both more than the British.  The authors write: "Generally, the French tend to purchase less processed food, such as drinks and prepared foods, and more basic ingredients such as meats, dairy, and vegetables. This is especially true compared to the US purchasing patterns. The UK and US purchasing patterns are more similar, but even here there are differences, with the average UK household consuming more vegetables, grains, and dairy, and the average US household consuming
more meat and drinks." 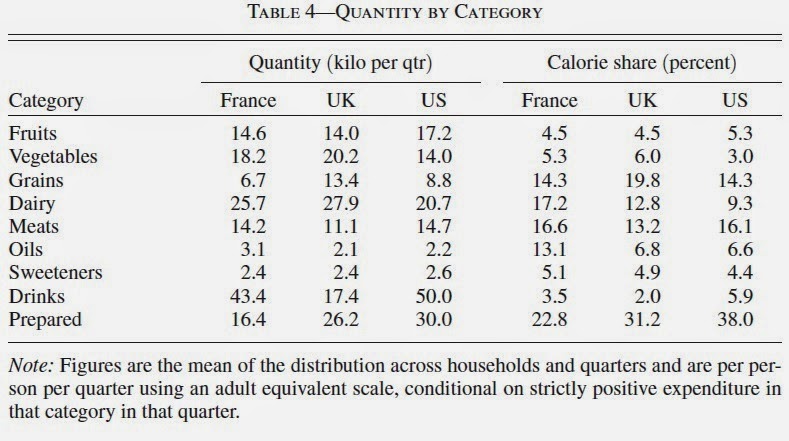 One final way to slice the data is to look at the nutritional content of these various categories. As noted a moment ago, "drinks" means something different depending on whether people are more likely to buy water or full-calorie sweetened beverages. In the chart below, for example, the typical 100 grams of drink purchased by the French has 27 calories from carbohydrates, while the typical 100 grams of drink purchased by an American has 69 calories from carbohydrates. They explain: "For example, the meat products that US households buy have on average much more fat and carbohydrate than the meat products that French households purchase, which are more protein intensive. Another example: we saw above that the higher fraction of calories from prepared foods in the United States is consistent with prepared foods in the United States being more calorie dense relative to UK prepared foods. The difference in calories from prepared foods seems to come from the differences in carbohydrates and fats. Drinks are also much more carbohydrate intense in the United States than in the
United Kingdom, and even more than in France." "Price differences mostly explain the large difference in caloric intake between the average French and US household. However, nutrient characteristics are important when comparing to the United Kingdom, and differences in preferences and eating habits are generally quite important, and in some cases can offset the influences of the economic environment. For example, we find that UK households have healthier purchasing patterns than US households despite the prices and product offering they face, not because of them. ...

Of course, given the public health issues posed by obesity, an obvious question is the extent to which public policy might seek to shape eating habits. But for now, I would just emphasize that the common food choices even among high-income countries vary by more, and in some different ways, than I would have guessed.